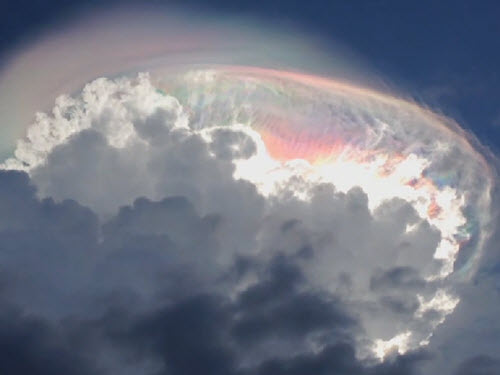 Some are calling it an “end of times” scene, but the little kid, 11-year-old Ariel Joseph Petit, filming this video below says it is the most beautiful thing he has ever seen.

The cloud was spotted on Tuesday, September 15th in Costa Rica, the day before the 8.3 Chile earthquake.

This is being reported as a rare weather phenomenon (via ABC):

Though users on social media have various theories on what caused the light formation, including aliens or UFOs, experts said the stunning view was caused by a rare weather phenomenon called “cloud iridescence.”

The colorful luminescence is caused by the sun’s light being refracted by water droplets and ice crystals in the cloud, said, Eladio Solano, a meteorologist with Costa Rica’s National Meteorological Institute, according to Costa Rica media outlet Teletica News.

It should also be noted that CERN has ramped up its Large Hadron Collider in recent weeks to the highest power levels ever witnessed by man.