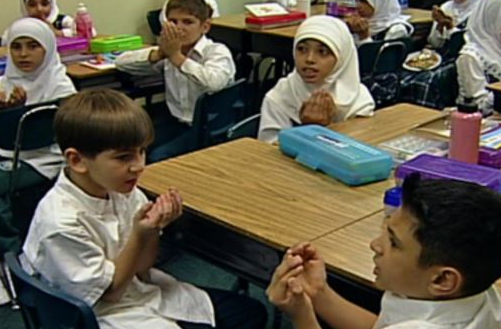 Schools in Tennessee are attempting to force students to declare Allah to be the supreme god.

Maury County parents are expressing their outrage against a textbook’s recounting of Muhammad being a prophet inspired by Allah.

Brandee Porterfield has expressed her anger toward aspect of the textbook, saying:

“I have big problem with that. From a historical point of view, that’s a lot of history these kids are missing. … Also, for them to spend three weeks on Islam after having skipped Christianity, it seems to be that they are making a choice about which religion to discuss.”

A Christian pastor in Tennessee has gotten so upset at the Islamic indoctrination in public schools that he is now telling Christian students to fail any class that teaches Islam and not go to the side of the devil:

Pastor Greg Locke of Global Vision Bible Church said church families were concerned and upset about middle school students being taught “a half-page of watered down Christianity” in sixth grade and 28 pages of Islamic curriculum.

“We have a number of our families at our church that are really upset and up and arms over all of this new Islamic indoctrination in our public school system,” Locke said. “That is nothing more than absolute brainwashing of religion, and we’re not going to stand for it.”

Wilson County Schools Director Donna Wright called Locke’s claims blatantly false and claimed that his video was made to intentionally incite parents and the community.

“No one in any Wilson County School is teaching any indoctrination of Islam or of any world religion for that matter,” Wright said. “To imply or state otherwise shows a lack of knowledge about the standards used in our schools.”

Instead of backing down, Locke doubled down and said that the school was equating all gods with the one true God.

“It’s straight up indoctrination – I’m not backing off that,” he said Friday.

There is nothing more frustrating for one who is in a system of indoctrination (public schools and colleges) trying to warn those outside about what is going on inside while the people take no heed.

These young people are being dropped off by their parents at the school gate to be illegally indoctrinated by the federal government through the violation of 10th Amendment. What is even worse is that so many of these parents profess to be Christians, conservatives and or patriots and yet throw their kids into the shark infested waters of foreign indoctrination (Proverbs 22:6). They simply hold the truth in unrighteousness (Romans 1:18). Hypocrites.

I previously warned about Islamic indoctrination in public schools, in August 2012. I wrote:

If you thought the U.N. International Baccalaureate and federal No Child Left Behind educational schemes were bad enough, you might want to look a little deeper.

In light of the 9/11 attacks, you would think the current administration would use a little prudence if they were sincerely concerned about a Muslim threat. When Obama took his oath of office, he instead defied America in numerous ways. He has given $1.5 billion to Muslim-led Egypt in foreign aid, shortly after the Muslim Brotherhood declared war on the United States. This is the same man that said America is “no longer a Christian nation,” followed by a reference that America may be described as a Muslim nation.

Studies have shown over 500 historical errors in public school textbooks, giving an Islamic slant to our youth.

How did this happen? The ACLU, the American Muslim Council, Americans United for Separation of Church and State and the Clinton administration joined together to create an environment that opened the door to Muslim teaching, while attacking anyone who speaks of the Christian religion in public schools.

Hence, you see the courts backing the Muslim agenda when, for example, a school in California is teaching their students a three-week course that essentially requires them to become a Muslim for that period of time!

This also very well explains why my ministry has been under incessant attack for bringing a moral and constitutional message to public schools.

To prove my point, a representative from the American Muslim Council, Abdul Rahman Al-Amoudi, today serves a 23-year prison sentence for being one of the top fundraisers of al-Qaida in the U.S.

In addition, there are over 225 Muslim schools in the U.S. and around 50,000 children who are being taught to, and I quote Brigitte Gabriel with ACT! For America, “foster an environment of hate, loathing and resentment toward Western culture, Christians, Jews, Shiites, secular Muslims and non-Muslims.”
Saudis have taken advantage of the Title VI program that our government implemented after World War II for the education of young Americans about foreign cultures and languages.

They are using their riches from oil to pump millions of dollars into our universities to appoint Arab professors in departments such as political science, Middle East studies, etc. who are brainwashing our students with an anti-American point of view. They teach that we are the problem; that our foreign policy is the problem; that our wealth, enlightenment and success are oppressing the rest of the world.

This explains why Obama is apologizing to other nations. This is why he is targeting the youth vote after this anti-American curriculum has sneaked its way into our schools. This is also why the communist organization The ACLU quickly represents Muslims while refusing to defend Christians who practice their faith in public schools.

America, why is this happening? In a nation that was founded on Christian principles, whose students were nurtured in a biblical worldview, could it be that the Christians became apathetic, went to sleep and allowed this radical agenda to creep in unnoticed by the public at large? (Read Leviticus 26 and Deuteronomy 28.)