It has been announced that more than 190 countries are set to meet in Paris in December to see about a “new global agreement on climate change aimed at reducing global greenhouse gas emissions and thus avoiding the threat of dangerous climate change” since the current “commitments” on emissions run out in five years.

In its report on this, The Guardian answers the question “Why has nobody thought of getting a global agreement on this before now?” by saying they’ve been trying to get something going in this area for 20 years now at least but only in the last two decades has “science” consistently pointed in one direction which is that greenhouse gas emissions from industry and fossil fuels are causing global temps to rise.

The science, huh? The “settled” science? The data that has “consistently pointed in one direction”?

Ignore a decades-long cooling period. Ignore Climategate — an organized climate change conspiracy and collusion in exaggerating warming data out of the Climate Research Unit at University of East Anglia — or that NOAA tried to erase the “pause” in warming in 1998 by saying it was just “improperly adjusted data”, for a moment.

Also ignore any anomalies that could be caused by clandestine solar radiation management aka geoengineering (spraying of particulates to reduce incoming sunlight) as has been advocated in UN IPCC reports.

Check this out. This is data posted on the Real Science blog from NOAA.

The first graph is what NOAA released in 2014:

The second picture, supposedly of the same data, is what NOAA released in 2015:

It magically got hotter all of a sudden.

The same time period should have the same data reported… So how did it suddenly get hotter over the last half a century?

Looks like more “improperly adjusted data”. As Steven Goddard at Real Science noted, “Their graph looks nothing like satellite measurements of global temperature.” 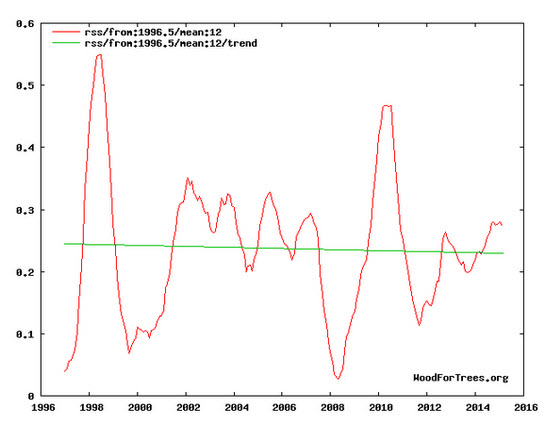 What 30-year cooling period you may ask? The one reported on here in 1978 in The New York Times.

Surely it couldn’t have anything to do with UN climate change talks coming up in Paris and the deadline on Friday of what Laurent Fabius has eerily deemed the end of “500 days to climate chaos,” could it? A day which just happens to kick off the UN’s Sustainable Development Summit which the one world overpopulation myth Pope is headlining in New York City where they’re going to announce Agenda 2030 (the new Agenda 21 on steroids)?

On top of everything else, it’s not like UN and Oxfam were caught bribing journalists to write climate change scareporn or anything.

By the way, do all these rising temps explain why we had rare snows in July this year?

Considering 31,487 American scientists have signed a petition to reject the Kyoto global warming agreement and similar agreements because limiting greenhouse gases to the extent these agreements propose would actually harm the environment, not help it — that’s a lot of people to prosecute.

Then again, if Al Gore didn’t say it, it must not be true.