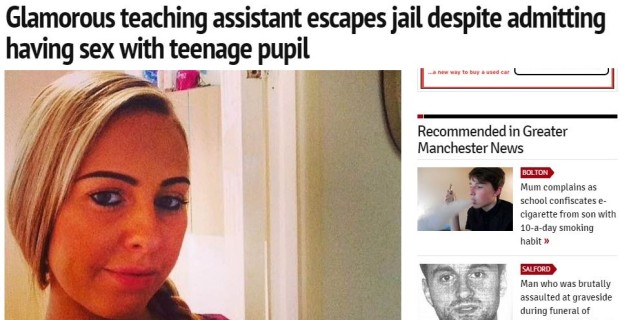 The mainstreaming of pedophilia continues… 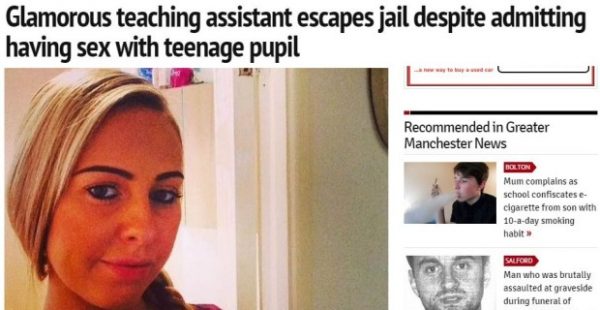 Two major newspapers in the United Kingdom described a 30-year-old woman who had sex with a child as “glamorous” and included numerous “gallery” pictures of the teaching assistant in the body of their articles.

However, Berriman was spared jail and only handed a two year suspended sentence by Minshull Street Crown Court. The child was at most 15 years of age when the offenses took place.

The Daily Star also described Berriman as “glamorous,” and like the Manchester Evening News also featured a number of photogenic gallery images in which Berriman is seen posing for the camera.

After I criticized the Manchester Evening News on Twitter for glamorizing pedophilia in their headline, the writer of the story, Todd Fitzgerald, blocked my account. The headline was subsequently changed, although no retraction was included.

@MENnewsdesk LOL – social affairs editor for this newspaper blocks me for criticising their pedo worship. pic.twitter.com/qZNQDGpfjT

Although feminists like to complain about how the “patriarchy” downplays the notion of men as sexual predators, this example completely debunks that notion.   Imagine if a 30-year-old man had slept with a 15-year-old girl. Would he be described as “handsome” by the media? Would there be a series of photogenic gallery images of the culprit looking cool and suave?

As we reported earlier this week, there seems to be an unnerving trend unfolding where pedophilia is being increasingly mainstreamed.   A writer for Salon.com who confessed to being a pedophile penned a lengthy article in which he argued that people should be more “understanding and supportive” of those who lust after sex with children.   Todd Nickerson, who runs a forum called ‘Virtuous Pedophiles’, insists that pedophilia is merely another form of “sexual orientation”.   Salon previously published an article in 2012 entitled ‘Meet pedophiles who mean well’. Follow on Twitter: Follow @PrisonPlanet