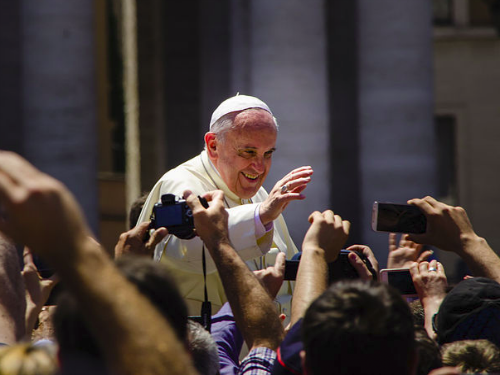 For a man who is supposed to represent the highest virtues of Christianity, Pope Francis sure has habit of racking up hypocrisies on a regular basis. However, it’s surprising how many of these hypocrisies were spawned in just the past few days. In fact, they’ve been mounting since the moment he embarked on his trip to North America, and I mean that quite literally.

As he pontificates to us about the threat of global warming and criticizes climate deniers, he does so while traveling the world in his Boeing 777.

The pope’s flights from Rome to Cuba, Washington, D.C., New York, Philadelphia and then back to D.C. and to Rome will total around 11,500 miles, so overall the pontiff will emit around 572 tons of CO2 during his trip.

To put that into perspective, 572 tons is the same carbon footprint as burning over 557,000 pounds of coal or over 1,200 barrels of crude oil.

It’s also the equivalent of over 1.2 million miles driven by a car that gets 21 miles per gallon and it’s 47 times the amount of energy a single, middle-class household uses annually.

Yet the pope is demanding that Americans cut back on their lifestyles and pay carbon taxes to fight so-called “man-made climate change.”

And earlier this year, he criticized the wastefulness of consumerism and unchecked growth for contributing to climate change, and then went on to call out air conditioning for being a particularly wasteful technology. He of course, wrote this criticism in his air-conditioned home, right next to the Vatican’s air-conditioned archives.

But his hypocrisy is not limited to his environmental statements. The Pope has also been busy asking Americans to accept more immigrants, while he resides over a nation that is surrounded by walls on all sides, and maintains some of the most stringent immigration laws in the world.

The Vatican, for its part, welcomes millions of visitors a year — but allows only a very select few, who meet strict criteria, to be admitted as residents or citizens.

Only about 450 of its 800 or so residents actually hold citizenship, according to a 2012 study by the Library of Congress. That study said citizens are either church cardinals who reside in the Vatican, the Holy See’s diplomats around the world, and those who have to reside in the city because of their jobs, such as the Swiss Guard.

Granted, you can’t expect a nation that consists of a paltry 109 acres to just open their doors and let everyone in, but then again, you can’t expect any nation to do that. You’d think he could give a little more credit to a nation that probably accepts more immigrants, legal and illegal, than any other on Earth. If he can’t do that, then he should either lead by example and start accepting some of Europe’s refugees, or hold his tongue.

And finally, during his trip to America Pope Francis canonized one Junípero Serra, a priest responsible for establishing the first nine Spanish missions in California during the late 18th century. These missions were largely responsible for assimilating the native tribes into Spanish culture. Or in other words…

Fifty different tribes in California condemned the sainthood conferred on Serra, said Deborah Miranda, a literature professor at Washington and Lee University in Virginia and a member of the Ohlone Costanoan Esselen Nation of California. She wrote “Bad Indians: A Tribal Memoir,” a book about her ancestors’ experiences in the Spanish missions.

“My objection and the objection of many California Indians is that he is being honored for in fact dishonoring many of our California ancestors. The missions ended up killing about 90% of the California Indians present at the time of missionization, creating all kinds of cultural and emotional baggage that we still carry to this day,” Miranda said. “It’s not a question of attacking the Catholic Church or attacking Pope Francis. It’s about making sure that the truth is heard and that injustices are not continued on into the 21st century.”

Depending on who you ask, Junípero Serra is either a hero or a genocide enabler, or even a little bit of both. He’s not exactly ‘saint’ material. But where the Pope’s canonization becomes hypocritical is when you consider the speech he made last April, which got him into hot water with the Turks for calling them out on the Armenian genocide, as well as criticizing the persecution of Christians in the Muslim world.

So I guess genocide and religious persecution are terrible crimes when committed by Muslims, but when a Catholic priest does it to the American Indians, it is an act worthy of sainthood. While Pope Francis’ has been rather hypocritical in the past, it doesn’t get much more blatant or absurd than that.