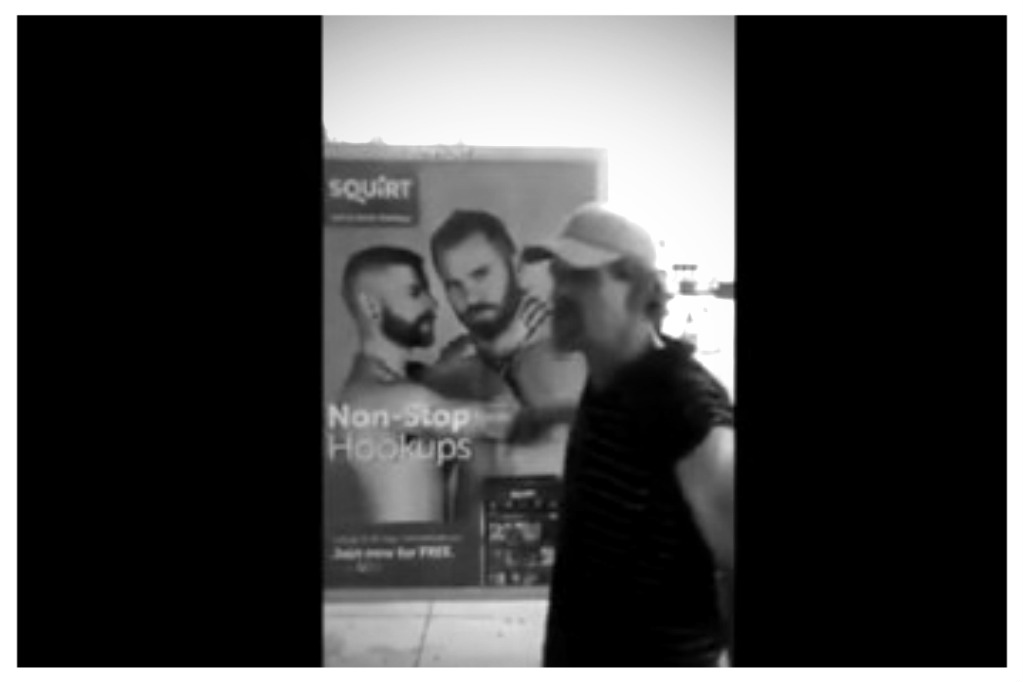 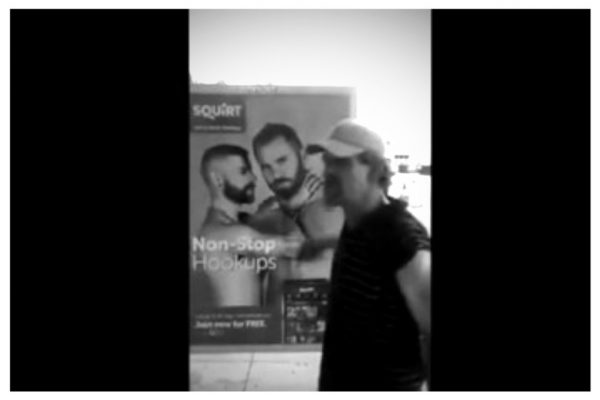 Homosexuals placed homosexual imagery in plain view sight for children and others to see. Well, one righteous American marine was so nobly angry that he took a rock and smashed it, he then took the disgusting poster and threw it to the street. Here is the video, with my own entertaining commentary:

Warning: Some language in video.

Many Christians throughout ecclesiastical history have defied the state to shatter satanic images. St. Ambrose wrote of a number of monks who burned down a Valentinian temple, writing that they, “enraged by their insolence, burnt their hurriedly-built temple in some country village.” (St. Ambrose, letter 40.16)

St. Cyprian, in 252 or 257 AD, before Christianity was legalized by Constantine and during the great pagan persecutions upon the Christians, firmly wrote in favor of the Mosaic law against paganism, and praised the actions of Matthathias (the father of Judas Maccabees) when he slew the traitorous Jew who offered sacrifice to the gods of Antiochus Epiphanies:

“That God is so wrathful against idolatry, that He hath even commanded them to be killed, who entice to offer sacrifice and serve idols. And again the Lord speaks and says, that neither must a city be spared, though one and all in it consent in idolatry In remembrance of which strict commandment, Mattathias slew him who had come to the altar to sacrifice. But if before the coming of Christ these commandments were kept concerning the worship of God, and the spurning of idols, how much more are they to be kept, since Christ’s coming!” (Cyprian, treatise xiii, 5, trans. & ed. Oxford, ellipses mine. See St. Robert Bellarmine, On Laymen or Secular People, ch. 21, ed. Tutino, p. 106, where refers to this text when substantiating the punishing of heretics)

Years before Constantine came to power, and the Roman Empire became Christian, and years before any Christian army was formed, the pagans slaughtered the Christians if they refused to make libations to the gods and to their idols.

St. Theodore was a soldier in the Roman military, and when he was ordered by a judge to make a pagan sacrifice, this holy warrior exclaimed, “I am a soldier in the service of my God and of his Son Jesus Christ!” The judge, like a Muslim who denies the sonship of Christ, said, “So your god has a son?” To this did the saint firmly respond, “Yes!” The judge asked, “Might we know him?” and Theodore said, “Indeed you can know him and come to him!” Theodore was given one night to think of his decision, to sacrifice or not to sacrifice.

He did not hypocritically say to himself, “I must submit to the government, therefore I will sacrifice.” Nor did he say, “My weapons are not carnal, but spiritual, therefore I will do nothing.” What did he do? He entered the temple of the pagan goddess Cybele by night, and burned it to the ground with fire. He was caught, and before the judge was asked, “Theodore, do you want to be with us or with your Christ?” Theodore declared, “With my Christ I was and I am and I will be!” A fire was set and he died in the flames, yet it is said that his body was not injured through the fire, but that he simply gave up the ghost. (Jacobus de Voragine, The Golden Legend, 165, trans. Ryan)

St. Theodore, amongst the earliest of the Christian militants, taught us through his actions just how militant Christianity is; for so hot are the flames of militancy within the Christian Faith, that he, without any government approval, rose up himself and attacked and destroyed the temple. The temple he set ablaze was the temple of Cybele, a goddess who was worshipped as a meteorite idol.

The saints, Florus and Laurus, in the 2nd century went to a pagan temple in Ulpiana (modern-day Kosovo) with all the local Christians, smashed all the pagan idols in the temple and then placed a Christian Cross.

St. Abercius of Hieropolis in the 2nd century, prayed for the salvation of Hierapolis. An angel appeared to him and ordered him to destroy pagan idols. The Holy Martyrs Speusippus, Eleusippus, Meleusippus, who lived around 175 AD in France, destroyed pagan idols in their native land.

During the anti-Christian persecutions of the 4th century a Christian woman was flogged, and placed on a rack where both sides of her torso were furrowed by blades. Another woman, gazing upon such a sight of cruelty, could no longer bear it. “And how long, then, will you cruelly torture my sister?” She was ordered to be brought before an altar to give libations to the gods, but she in complete defiance to tyranny–and complete obedience to God–kicked the altar down as Gideon brought low the altar of Baal. After enduring the greatest of tortures, she was sentenced to the flames. (The Book of Martyrs, ch. viii)

St. Polyeuctus of Melitene was a Roman soldier who with great zeal held onto Christ and His Cross in his heart. The Emperor Valerian (253-259) issued an edict ordering everyone to show adoration to the pagan idols. In holy zeal Polyeuctus grabbed the edict and tore it up to pieces. He then attacked twelve, dashed them to pieces and trampled them underfoot.

In the late 3rd century Pompeiopolis a Christian named Sozon (“Saved”) of Cilicia broke down a gold idol and distributed the pieces to the poor. When he was brought before the emperor Maximian, he said:

I did this, so that you might see the lack of power of your god, which offered me no resistance. It is not a god, but a deaf and dumb idol. I wanted to smash it all into pieces, so that people would no longer worship the work of men’s hands.

To all those who condemn this man for tearing down the sodomite poster, are you better than these saints? Are you all of a sudden superior to thousands of years of Christian militants destroying pagan images? If all of us had the zeal that this man has, there would be none of this horrifying anti-Christian imagery in our streets.

For too long Christianity has been watered down in our modern day as a pacifist faith with no inclination of fighting evil. But is the Church here to be weak and useless? This shocking and riveting two disk DVD set lecture series, passionately shows how Christianity is not here to be feeble, but for warfare, to be militant against tyranny and the forces of darkness.