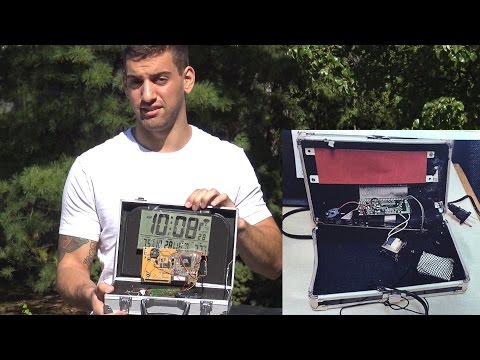 Members of public react with shock to bomb-like object

A video of a white guy with a briefcase clock that looks almost exactly like the one that got Ahmed Mohamed into trouble contradicts the claim that ‘clock kid’ was targeted simply because he was a Muslim.

The video shows YouTuber Joey Salads gauging the public’s reaction to him unveiling the ‘clock’ – which looks more like a bomb – at several different locations.

When Salads unveils the ‘clock’ at a bus stop, a man immediately approaches him and says, “You can’t do that here, bro,” before calling 911.

“Even though that I’m white you still thought it was a bomb?” Salads asks the other people at the bus stop, to which they respond in the affirmative.

Another couple sat on a bench are not perturbed by the ‘clock’, but at a separate location a girl immediately stands up before stating, “What is that? You just scared the living crap out of me!”

A black woman immediately leaves the scene when Salads sits down near her on a wall and opens the briefcase.

Another couple sat in a diner admit that they weren’t worried because Salads doesn’t look like the kind of guy who would “blow up a mall.”

The video clearly illustrates that if you walk around with a ‘clock’ that looks more like a briefcase bomb, some people are going to get suspicious – no matter the color of your skin.

Just like the video, not everybody thought the ‘clock kid’ was carrying a bomb when he brought it to MacArthur High School. Mohamed’s engineering teacher’s first reaction on seeing the ‘clock’ was to remark, “That’s really nice.”

As we previously reported, when students at George Mason University were shown a picture of Mohamed’s ‘clock’, almost all of them said it looked like a bomb.

As Judge Andrew Napolitano explained, the fact the entire incident, which earned Mohamed an invitation to the White House from President Obama and thousands of dollars in donations, looked like a purposeful stunt, could lead to a fraud investigation.

Electronics experts have noted that Mohamed’s “clock” closely resembles a 1970 s or 1980s Radio Shack digital clock. They claim that he likely took it apart and reassembled it, purposefully leaving wires exposed to make it seem like a dangerous object.

A man also threw doubt on claims that Ahmed’s clock was an elaborate science project by building a near-exact replica of the clock in just 20 seconds using the guts of a store-bought clock and a briefcase.

Mohamed’s father, Mohamed ElHassan Mohamed, is also a Muslim activist who was responsible for numerous other stunts aimed at highlighting claims of Islamophobia. Mohamed’s sister was also previously suspended for three days over claims that she wanted to blow up her school.