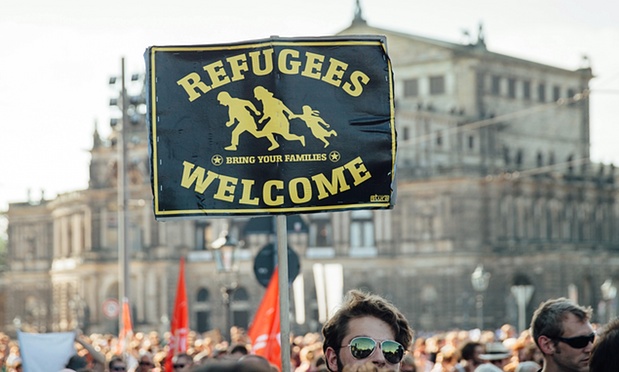 Despite the large anti-Islam demonstrations taking place around Germany, it seems like even more Germans are happy to welcome what has become a never-ending invasion of Muslim freeloaders, thugs, rapists, and terrorists…as long as they aren’t the ones being evicted themselves.

UK Telegraph: A 51-year-old German Christian woman (one of many) is being evicted from her home of 16 years to make way for refugees, with shelters already full across the country.

A woman in Germany is being evicted from her home amid growing concerns over how Germany will find accommodation for the hundreds of thousands of refugees flooding into the country.

Bettina Halbey, a 51-year-old nurse, has lived alone in her flat in the small western German town of Nieheim since her children grew up.

On September 1, she received a letter from her landlord, the local municipality, telling her the building was being turned into a refugee shelter and she had until next May to leave.

“I was completely taken aback,” Ms Halbey told Welt newspaper. “I find it impossible to describe how the city has treated me.”

When Ms Halbey vented her frustration on Facebook, asking why she was being evicted when properties were standing empty in the town, her comment was shared 200,000 times.

In Germany, where 52 per cent of people rent their homes, it is unheard of to be asked to leave under such circumstances.

Tenants are strongly protected by law, and can normally only be evicted if they have broken the terms of their rental agreement.

“I’ve muddled through sorrow and distress, and then I get this notice,” said Ms Halbey, who brought up her two children as a single mother in the flat. “It was like a kick in the teeth.”

Ms Halbey insisted she was not against Germany taking refugees in. When asylum-seekers moved into the flat above hers last May, they got on well, she said. “We take care of each other. Helping people, this is my commandment,” she said.

Although the building belongs to the local municipality, it is not social housing and Ms Halbey pays the full market rent.

But Rainer Vidal, the mayor of Nieheim, said the building was needed to house refugees because the town’s existing three shelters were full. “A new residential unit for 30 refugees in Nieheim would cost €30,000 (£22,000). This solution will cost me nothing,” he told Welt.

Doubts have been raised over whether the municipality’s move is legal. It has invoked a law under which a private landlord can evict a tenant if he wants to move into the property himself.

“Normally, only a natural person can terminate for personal use A municipality cannot move into a flat as a legal entity, so the process is legally highly questionable,” Ulrich Ropertz, spokesman of the German Tenants’ Federation, said.

The controversy has come amid growing concern in Germany over how to house refugees, with shelters already full across the country and tens of thousands continuing to arrive.

Angela Merkel’s government agreed on Thursday to release a further €2 billion (£1.5 billion) to help pay the costs of sheltering refugees, €500 million (£370 million) of which is earmarked for building new accommodation.

But critics say it is not enough, with Germany expecting to host as many as one million asylum-seekers this year.

The state government of Hamburg is trying to push through legislation that would enable it to seize empty commercial properties and turn them into refugee shelters.

Local politicians in Berlin have called for empty apartments to be requisitioned from private landlords.

There have even been suggestions of a return to the solution of the postwar years, when millions of refugees fleeing to West Germany from former Nazi-held lands were billeted with ordinary families.

Despite the concerns over housing, public support for Mrs Merkel’s policy of admitting so many refugees remains high, according to a new opinion poll.

Fewer than a quarter of Germans think the country is accepting too many refugees, while 49 per cent think it’s taking the right number, and 21 per cent think it should take even more, the poll for ZDF television found.

But an overwhelming 78 per cent of those polled supported the government’s move to suspend the Schengen agreement and temporarily reimpose border controls during the crisis.

Genuine refugees are still allowed to enter Germany, but there are concerns many are lying about their nationality to get around the checks. The interior ministry estimates as many as 80% of those claiming to be from Syria are in fact from other countries,a spokesman said on Friday.

Germany has said it will accept Syrian refugees even if they should apply for asylum in a different member state under EU rules.