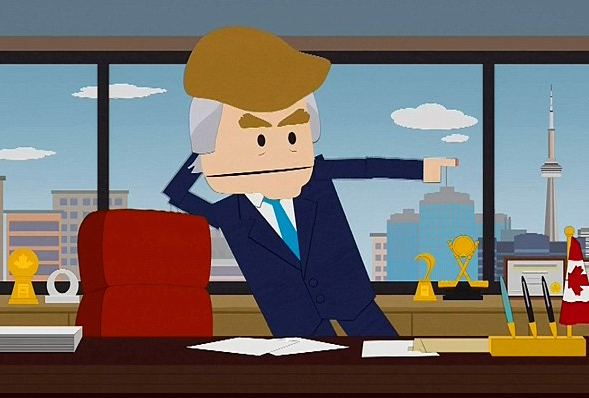 The episode was called “Where My Country Gone” in reference to Trump’s slogan “Make America Great Again”.

Apparently we live in a world where this is a thing now and no, this isn’t your average cartoon violence.

Not just raped and murdered, but raped to death.

We could write “you can’t make this stuff up,” but someone just did.

It has been suggested this is a response from a system that is scared to death of Donald Trump. Wonder what Trump thought of it? His campaign has declined to comment.

South Park is overrun by Canadian immigrants, prompting teacher Mr. Garrison to launch a “Where My Country Gone” campaign to build a wall along this country’s north border. “I propose we f*ck them all to death,” Garrison tells CNN. “After we’ve f*cked every last one of them to death, we build a big wall. And if anyone comes over the wall, we f*ck them to death, too!”

Canada beats him to it, because Donald Trump has been elected its political leader, triggering the exodus. One Canadian expat explains how that happened: “There were several candidates during the Canadian elections. One of them was this brash a**hole who just spoke his mind. He didn’t really offer any solutions, he just said outrageous things. We thought it was funny. Nobody really thought he’d ever be president. It was a joke! But we just let the joke go on for too long. He kept gaining momentum, and by the time we were ready to say, ‘OK, let’s get serious now, who should really be president?’ he was already being sworn into office. We weren’t paying attention… We weren’t paying attention!”

Garrison sneaks into that country, in a barrel via Niagara Falls and, when he tracks down Trump, he rapes him to death. Canadians return to their country and Garrison drives off to make his run for the White House, with running mate Caitlyn Jenner behind the wheel, who runs over a pedestrian.

Wow, just… what else can you really say about that?