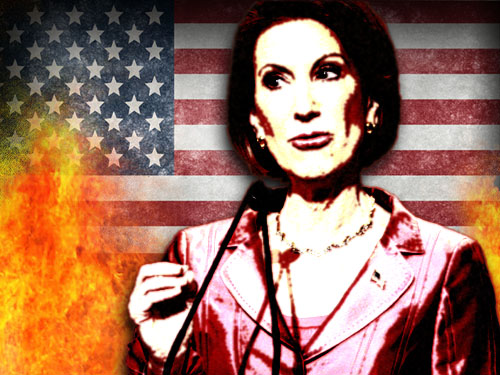 Carly Fiorina is about as much of an American establishment puppet as a person can possibly get.

Let’s pretend for a moment that the American election process is real and all of our votes really do matter (yeah, right). Why, in their right mind, would any person ever in a million years vote for Carly Fiorina of all potential candidates?

And no, I’m not asking this rhetorical question because Hewlett Packard’s stock price fell 52 percent during her disastrous six-year tenure as CEO there.

Here are at least five reasons why only someone who has been lobotomized would ever vote for this woman to be president of anything, be it America or an elementary school bake sale.

1. After 9/11, Carly Fiorina helped then NSA director Michael Hayden ensure unconstitutional NSA backdoor surveillance programs would be installed on thousands of computers destined for U.S. stores (and our homes).

Fiorina’s relationship with the U.S. intelligence community dates back to the weeks after the Sept. 11, 2001, terror attacks, when she got an urgent phone call from then NSA director Michael Hayden asking her to quickly provide his agency with HP computer servers for expanded surveillance.

While he did not tell Fiorina the details, Hayden confirmed to Yahoo News last week that he needed the HP servers so the NSA could implement “Stellar Wind” — the controversial warrantless wiretapping program, including the bulk collection of American citizens’ phone records and emails, that had been secretly ordered by the Bush White House. “Carly, I need stuff and I need it now,” Hayden recalled telling Fiorina.

Fiorina acknowledged she complied with Hayden’s request, redirecting trucks of HP computer servers that were on their way to retail stores from a warehouse in Tennessee to the Washington Beltway, where they were escorted by NSA security to the gates of agency headquarters in Fort Meade, Md.

“I felt it was my duty to help, and so we did,” Fiorina said. “They were ramping up a whole set of programs and needed a lot of data crunching capability to try and monitor a whole set of threats. …What I knew at the time was our nation had been attacked.”

So it was her “duty” to “help” the government spy on her fellow Americans without a warrant? Notice it says, “While [Hayden] did not tell Fiorina the details…” She didn’t even know what Hayden was doing with the consumer servers… and she didn’t ask before she handed them over.

That’s how much of a blind establishment puppet this woman is.

You remember Hayden, don’t you? He’s the guy who denied that probable cause was part of the 4th Amendment.

2. Fiorina is “not aware” of a time when NSA surveillance “went too far”:

Fiorina said, “I’m not aware of circumstances” in which NSA surveillance “went too far,” although she supports “the checks and balances” put into place by Congress that ended agency bulk collection of phone records.

She also thinks that if the NSA just explains to us little American peons what their multi-billion-dollar spy hub in the Utah desert is for, then “I think many people will be reassured”.

3. For her “service,” Hayden later named Fiorina chair of a CIA advisory board after he became director of the agency in 2006.

In that capacity, she made regular trips to CIA headquarters in Langley, Va., including overseeing one specific project requested by Hayden: Provide advice on how the CIA could maintain its undercover espionage mission in a culture of increasing government leaks and demands for greater public accountability and openness.

But don’t worry, she claims she advised the CIA and NSA to be more transparent:

“One of the things that I advised the NSA and CIA to do is to be as transparent as possible about as much as possible — because transparency reassures people,” Fiorina said in the interview.

…Right. Reassure people while lying to and spying on them.

And once you “advise” the CIA, you are basically CIA forever. Period.

4. Fiorina once suggested that Jose Rodriguez, former CIA Counterterrorism Chief who later came under criminal investigation for ordering the destruction of waterboarding tapes, should have been a “spokesman” for the CIA.

This is a guy who has staunchly defended CIA torture tactics and even contributed to the book, “Rebuttal,”  by former CIA officials in an attempt to refute the Senate torture report (which the CIA also illegally hacked Senate computers over).

“The reason I made that recommendation is that people would have been amazed to meet him,” Fiorina said. “People would have been surprised by who he was, and what he had done. … For the American people to look into your eyes, to see your face, to hear your story — they are going to see you’re not some scary guy. You’re actually a small, mild-mannered man who cares deeply about the safety of the nation and dedicates his life to the safety of the nation.”

Why is she fawning over the CIA torture chief? Oh yeah, maybe that’s because:

5. Fiorina has vigorously defended CIA waterboarding because she believes it helped “keep our nation safe“.

Wow, she believes that total and utter b.s.? Does she believe in the tooth fairy and the Easter bunny, too?

It’s already been proven torture never garnered us any real intel. Why? Torture doesn’t work. Never has. But beyond that, this woman is certainly presenting herself as someone without any critical thinking skills whatsoever.

“It’s outrageous for anybody to claim that torture was limited or that this is the way the U.S. should have conducted business after 9/11,” said [Naureen Shah, director of the security and human rights program at Amnesty International USA] about Fiorina’s comments to Yahoo News. “This is completely rewriting the history of what happened.”

If it comes down to Jeb and Hillary in 2016, which it likely will, I could really see them pairing Fiorina with Jeb just to have a woman on the Republican side of the carpet opposite Hillary. Fiorina seems exactly like the kind of person who will do whatever she’s told if it is “for America” without asking any useful questions whatsoever.

With attractive “outsider” and useful “business” credentials, she has proven herself to be a full-fledged spokeswoman for the shadow government and perpetual war state which is ultimately against everyone everywhere, including the American people.

War? Sure. Torture? Great. Unconstitutional surveillance? Let’s do it. Fiorina 2016.