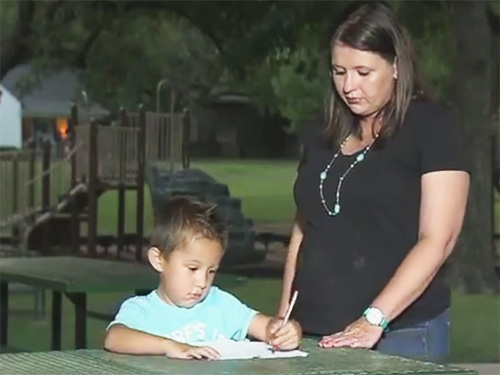 Last week it broke that a Pre-K teacher in Okemah, Oklahoma was forcing a four-year-old boy named Zayde to write with his right hand even though he was left-handed or face punishment by sitting in the corner.

Zayde’s mom Alisha noticed her son began suddenly using his right hand to do his homework instead of his left, so she asked him about it. “I just asked ‘Is there anything his teachers ever asked about his hands?’ And he raises this one and says this one’s bad,” she told KFOR.

When Alisha sent a note to the teacher about it, she was sent an article which discussed how left-handedness has historically been viewed as “evil” in western cultures. It noted, “for example, the devil is often portrayed as left-handed.”

The article appears to have come from here. The section on left-handedness traditionally being thought of as evil appears to simply be for historical reference (although the point could have been made a little clearer for people lacking solid reading comprehension skills).

Either way, it’s obvious the teacher took it as factually relevant to modern times and began trying to force her students not to write with their dominant hand if that dominant hand was the left one.

The story broke last Monday. By Wednesday, Okehama Superintendent Tony Dean was oddly defending this unnamed teacher of eight years, saying that the article being sent home “appalled” and “angered” him and that he took “appropriate disciplinary action” against the teacher although he wouldn’t go into details on specifically what that was. The teacher was apparently not suspended over this.

In fact, the Superintendent went on to claim the teacher doesn’t have anything against lefties and that her own husband is left-handed. From his “investigation and talking to many, many people” (notice he says “people,” not “kids”), Dean said he felt the teacher never told any student not to use his or her left hand, seemingly completely dismissing Zayde’s story.

Well… Dean’s “investigation” must not have included basic questioning of other left-handed kids in the class, which would’ve been most people’s immediate inclination were they really trying to investigate this situation.

That was Wednesday before the family of yet another little girl from this teacher’s class came forward with a cell phone video of the girl confirming she was made to go to the corner for writing with her left hand as well.

None of these stories name the teacher, just by the way. Not sure why they are protecting her.

How many four-year-olds out there would randomly make something like that up? Kids don’t come into the world with preconceived notions that something as ridiculous as what hand they write with could be “evil” or “sinister” or “like the devil” (as if four year olds even know what the devil is).

Were these little kids told they were satanic for writing with their left hands?

Considering that teacher had been there for eight years, one has to wonder how many children began their public school education in Okemah by bizarrely being forced to write with their non-dominant hand because their left hand was “evil” due to an ignorant teacher’s delusions and blind protection by school administrators who have policies of basically looking the other way when something like this comes to light.