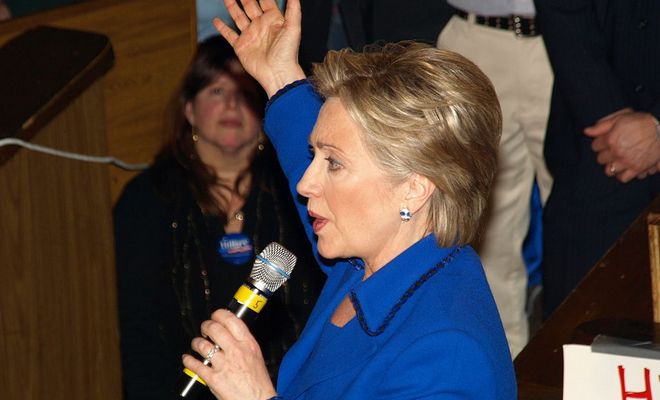 “WE ARE WORKING FOR HILLARY’S CAMPAIGN HERE IN LAS VEGAS”

(INTELLIHUB) — In what is sure to be labeled as just another “conspiracy theory” by the Clinton Campaign and her media allies, recently released undercover video taken in Nevada shows a Hillary 2016 campaign worker openly committing a felony by advising Hispanics to support Clinton as he helps them register to vote.

The footage was taken by the conservative group Project Veritas and is the latest undercover sting released by the organization most famously known for taking down the hard left Obama group ACORN.

Clinton campaign fellow Henry Engelstein is seen in the hidden camera footage getting the attention of potential Hispanic voters by showing them a ridiculous picture of Donald Trump which reads, “THIS IS MY RESTING B**CH FACE.”

Engelstein then goes on to literally attack Trump as a “giant clown” while telling people who he is trying to register to vote that Clinton is “very good”.

As the Daily Mail noted, “The video also shows Engelstein appearing excited by his success rate, and placing a phone call to a colleague in search of reinforcements.”

‘Come here. Come here,’ he says in English. ‘There’s like hundreds and hundreds of people and I just flash a picture of Donald Trump on my phone and they all sign up.’

One can only assume that Engelstein was aware of Nevada election laws, especially considering he is a paid campaign worker for the former Secretary of State’s 2016 presidential campaign.

“Section 10 of Nevada Revised Statute 293, Section 505 prohibits any ‘person assisting a voter’ with registration from ‘solicit[ing] a vote for or against a particular … candidate’ or speaking with them in any way about whom to vote for.”

So far the Clinton Campaign has refused to comment but it is only a matter of time before her campaign PR talking heads, with the help of a compliant media, label the video as “edited” or just another right wing conspiracy theory despite the fact that her campaign worker clearly and undeniably commits a felony on video.

This is yet another perfect example of the world of Hillary Clinton, complete with documented criminal activities that will somehow once again go ignored.