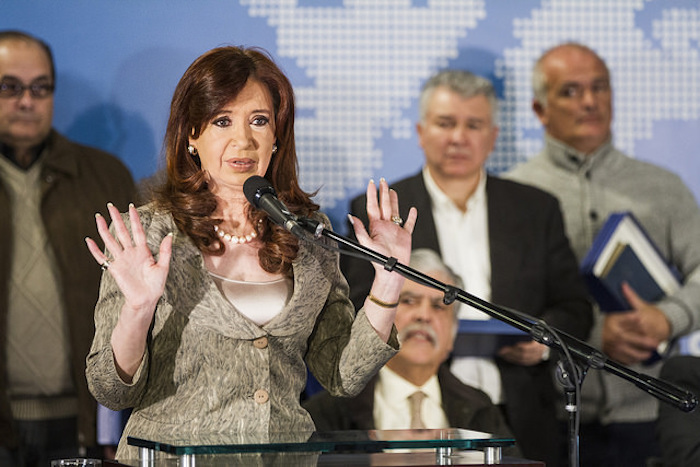 During her speech President Kirchner said that Gary Samore, former White House Coordinator for Arms Control and Weapons of Mass Destruction under the Obama Administration until 2013, approached Argentinians in 2010 trying to convince them to provide Iranians with nuclear fuel — a claim that Samore didn’t bother to deny.

In 2010 we were visited in Argentina by Gary Samore, at that time the White House’s top advisor in nuclear issues. He came to see us in Argentina with a mission, with an objective: under the control of IAEA, the international organization in the field of weapons control and nuclear regulation, Argentina had supplied in the year 1987, during the first democratic government, the nuclear fuel for the reactor known as “Teheran”. Gary Samore had explained to our Minister of Foreign Affairs, Héctor Timerman, that negotiations were underway for the Islamic Republic of Iran to cease with its uranium enrichment activities or to do it to a lesser extent but Iran claimed that it needed to enrich this Teheran nuclear reactor and this was hindering negotiations. They came to ask us, Argentines, to provide the Islamic Republic of Iran with nuclear fuel. Rohani was not in office yet. It was Ahmadinejad’s administration and negotiations had already started.

You see according to the Belfer Center as a WMD Coordinator, Samore, “served as the principal advisor to the President on all matters relating to arms control and the prevention of weapons of mass destruction proliferation and WMD terrorism, and coordinated United States government activities, initiatives, and programs to prevent proliferation and WMD terrorism and promote international arms control efforts.” So you can clearly see how if the allegations President Kirchner made are true there is a definite conflict of interest here.

Let me reiterate this — a former Obama Admin. Official, Gary Samore, has been accused of trying to facilitate a secret deal for the Iranians to obtain nuclear fuel! Moreover when the Argentinians requested that the deal be put into writing Samore backed out later approaching agents of several other countries seeking a similar deal.

Ladies and gentlemen, if true, this can only mean one thing; that the Obama Admin was, and possibly still is, trying to actively arm Iran making them nuclear capable. And if that’s the case, which we may never know for sure, we can go even one step further and say that Samore’s actions may have been an attempt by the Obama Admin to conjure up another 9/11 on U.S. soil — this time in the form of a mushroom cloud.