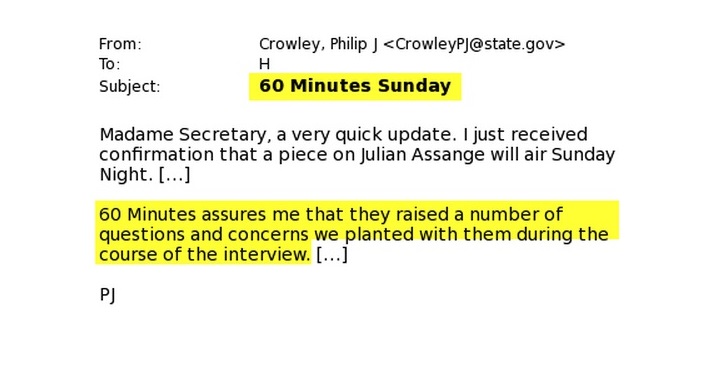 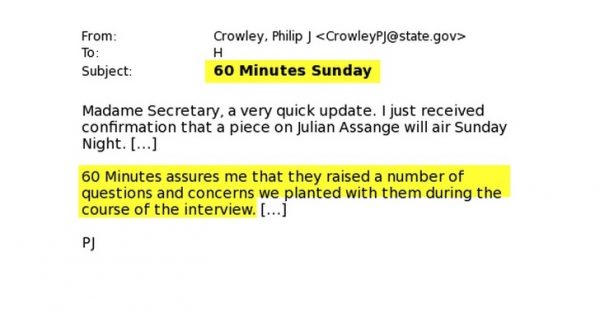 Washington D.C. — A Hillary Clinton staffer planted questions in a CBS 60 Minutes interview with Wikileaks founder Julian Assange, according to email records released this week. At the time of the interview in early 2011, Assange had already leaked sensitive, embarrassing information from the State Department. The unclassified staff email to Clinton, released amid her ongoing email scandal, demonstrates not only that the former Secretary of State and her staff were out to discredit Assange, but that the government manipulates media and wields heavy influence over it.

In an email from January 28, 2011, Philip J. Crowley, then Assistant Secretary of State for Public Affairs, alerted Hillary Clinton that 60 Minutes conducted an interview with Assange set to air on the 30th. As Crowley informed her, “We had made a number of suggestions for outside experts and former diplomats to interview to ‘balance’ the piece.” This statement alone shows the access to media that powerful government agents enjoy.

He goes on to further reveal that influence: “60 Minutes assures me that they raised a number of questions and concerns we planted with them during the course of the interview,” Crowley said, suggesting the interview would not be embarrassing to Clinton or the State Department: “We will be prepared to respond to the narrative Assange presents during the program.”

Several minutes into the conversation, Kroft asks Assange point-blank if he is a “subversive.” Interestingly, the only politician Assange names directly in his response is Clinton herself: “I’m sure there are certain views among Hillary Clinton and her lot that we are subverting their authority. But you’re right, we are subverting illegitimate authority. The question is whether the authority is legitimate or whether it is illegitimate.”

Kroft pushed Assange regarding accusations that sensitive information about government operators was leaked to terrorists: “There have been reports of people quoting Taliban leaders saying they had the names of these people and they were going to take retribution,” he commented. Assange retaliated that the Taliban is not a coherent group, though he did not deny the dangers of releasing information.

“There’s a perception on the part of some people who believe that your agenda right now is anti-American,” Kroft said to Assange, who dismissed that notion by highlighting the fact that Americans send Wikileaks information and it is in the “revolutionary” spirit to do so.

“There is the First Amendment. It covers the case. And there’s been no precedent that I’m aware of in the past 50 years of prosecuting a publisher for espionage. It is just not done. Those are the rules. You do not do it.” Assange dismissed ideas that he should be prosecuted.

When accusing Assange of espionage didn’t work, Kroft tried another angle. He suggested that if Julian Assange was not punished, it would set a dangerous precedent for others to leak classified documents. Kroft said:

“…if they don’t come after you now that what they have done is essentially endorsed small, powerful organization with access to very powerful information releasing it outside their control. And if they let you get away it, then they are encouraging —”

Assange interrupted: “Then what? They will have to have freedom of the press?” After a brief and tense exchange, Assange asserted, “If we’re talking about creating threats to small publishers to stop them publishing, the U.S. has lost its way. It has abrogated its founding traditions. It has thrown the First Amendment in the bin. Because publishers must be free to publish.”

Ironically, throughout their conversation about free speech and the freedom of the press, Kroft was feeding him questions straight from the mouth of government — more specifically, a government agency with a probable vendetta against Assange for releasing embarrassing information.

The government is no stranger to manipulating the media. It was recentlyrevealed that the CIA heavily influenced the bin-Laden-themed film, Zero Dark Thirty. The military regularly reviews films with military-subject matter and helps dictate content. The New York Times presented information in a way that deceptively downplayed the CIA’s operations in Syria, a move many view as a consequence of the agency’s decades-old efforts to manipulate the media.

News of the State Department’s manipulation of Assange’s interview is not a revelation. Nevertheless, it constitutes yet another crack in the facade of carefully crafted sound bites and the subtle, yet potent, manipulation of information.