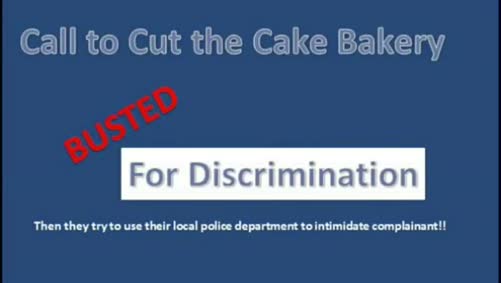 A US Marine named Robert Mannarino called a pro-homosexual bakery in Florida, Cut the Cake, and requested for a cake with a Bible verse on it, Leviticus 20:13, and the bakery made it quite obvious that they did not want to provide service for the Marine, wanting to charge him $150 for each letter, which would have cost thousands. The Marine called the same bakery later on, this time with a disguised voice, and asked for a simple birthday cake with the words “Happy Birthday,” and no such charge was made. Obviously, this was anti-Christian discrimination. Here is the video:

Not surprisingly, the sodomites are forcing Christians to make them cakes for their pagan homosexual “weddings” while they do not want to make cakes that go against their beliefs. The Christian will say, ‘Such a cake goes against my faith.’ The presumptuous sodomite will say, ‘Your faith is irrelevant. You as a baker are providing a public service and are to carry out that service regardless of your inner convictions.’ Yet, when the Christian asks for a cake that goes against their beliefs, then, all of a sudden, they start saying, ‘Well, that is against my beliefs,’ and all of their prior arguments against Christians go out the window.

I saw this first hand when I called up 13 pro-homosexual bakeries.

Say that “Bestiality Is Wrong” or “Polygamy Is Wrong” and it’s not considered hate speech, but if you have the opinion that “Gay Marriage Is Wrong” the whole world jumps up and down screaming “racism,” “bigotry,” and “hatred.”

This is becoming the politically-correct norm, but no matter what one argues, this is suppressing free speech.

No one targeted pro-gay bakeries, but gay activists target Christian bakeries. One Christian bakery was sued for refusing to put the slogan “Support Gay Marriage” on a cake for an event to support the sodomite agenda. Yet, Christian bakeries that refuse to make pro-homosexual marriage cakes are getting sued left, right, and center. They get fined, they get death threats, and they lose their businesses. This experiment proves beyond doubt that the sodomite agenda is not just about their freedom to practice a sexual orientation, but it is also about the suppression of free speech.

To make our case, we provided 3 video clips; the third one is a video showing how homosexual activists in Ireland used the state to force a Christian bakery to make a cake with the slogan “Support Gay Marriage” for a pro-sodomite marriage event. The baker refused, which added a tremendous loss to his business. Several Christian bakeries were sued in the United States, with several losing their businesses, and we said enough is enough.

So Shoebat.com decided to call some 13 prominent pro-sodomite bakers in a row. Each one denied us the right to have “Gay Marriage Is Wrong” on a cake and even used deviant insults and obscenities against us. One baker even said all sorts of profanities against Christians and ended the conversation by saying that she will make me a cookie with a large phallus on it.

It was all recorded. It will stun the American people how militant and intolerant the homosexual bakers were. Even after we completed our experiment, we got a ton of hate messages saying that we were “hateful” for simply giving them a taste of their own medicine. They argued that the slogan “Gay Marriage Is Wrong” is not the same thing as “Support Gay Marriage,” as if an opposite view of a view is hateful. This would mean that the majority of Americans who oppose homosexual marriage are “bigoted” and “hate filled.” “Support Polygamy” or “Polygamy is Wrong” are views: the first is supported by the Muslims, and the second, most Americans would never support—but both are opinions and are considered free speech.

The big lie of the homosexual agenda is this: They claim that they are only fighting for equality and tolerance.

What then is their agenda?

Many say we are the ones who are “bigoted” “phobic” “hate mongers” … the typical remarks are:

“Support Gay Marriage” doesn’t hurt anyone; it doesn’t shame anyone. However, to say “Gay marriage is wrong,” or to use any other homophobic remarks, is offensive and hurtful to people.

One could argue such a statement by applying a different set of moral standard:

“Support Polygamous Marriage” doesn’t hurt anyone; it doesn’t shame anyone. However, to say “Polygamous marriage is wrong,” or to use any other Polygomo-phobic remarks, is offensive to Muslims and Mormons who believe in Polygamy. In fact, the latter is not just an issue of sexual preference but of a religious belief.

So where does it end?

THE REAL GOAL OF THE HOMOSEXUAL AGENDA

One sodomite claiming to be a professor at a Catholic university even commented on our blog with the following:

“Are you aware that we gays have larger brains, superior cognitive functions, spatial memory and verbal skills? It’s a biological fact of life.”

But such views are the views of tyrannies. The Nazis and others believe in such nonsense. Tyrannies use false pseudo-science, and they all have a superiority complex. It is the case with every deviant cult and tyrannical movement. Why target Christian bakeries in the first place? Such a view is no different than what Christoph Meiners promoted:

The sodomite agenda argues that straight folks have a smaller brain.

So, to all these who call us “bigoted,” “homophobic,” and such: in reality, they are applying what is to be applied to them.

Our answer to all detractors is this:

Yet, we always get accused here at Shoebat.com of lacking love, since Christ, according to many, teaches that we should love the homosexual and that promoting the idea that “gay marriage is wrong” makes us “homophobes.”

And we ask: does God love the homosexual and hates only the homophobe? Or is it that a view which rejects an agenda is always labeled with ‘hate’ and ‘phobia’ and is why we have labels like Islamophobia and Homophobia … the world of anti-labels are the ones who truly invent labels that are intended to coerce individuals to conform to a certain mindset. In reality, the “hate” accusers are guilty of the very thing they accuse us of and are actually liars. And since “hate” is always used in such arguments claiming that God taught us that we should never hate, God has an answer: He hates:

seven that are detestable to him:

a heart that devises wicked schemes,

feet that are quick to rush into evil,

a false witness who pours out lies

and a person who stirs up conflict in the community. (Proverbs 6:16-19)

When it comes to such agendas, it is not an issue of freedom, tolerance, love, hate, or equality. It is always a war on which side wins. Period.

This is the case with every agenda, be it Christian, Sodomite, Nazi, Communist, Islam …no one can stop what’s coming from the pipeline of evil.

But rejoice, the Nazi came to destroy the Church and so did the Communist, yet these tyrannies have come and gone, and, in the end, the Church was standing victorious. We are on the winning side because God ordained the norm and set up logical standards for living.

And if the Lord says, “Fear not,” why is everyone so afraid to confront this arising tyranny?

The Christian life is to fight and never give in until we win: and win we will. Just ask the Nazis and the Communists and the Greeks and the Romans … their empires always end while Christ reigns victorious.

But for now, knows this: every anti-Christian agenda starts by inserting the leaven, and, in time, it will destroy the whole batch. It starts with “don’t ask don’t tell,” and it ends up with rights in the military to be open with perversions, and continues with rights to force bakeries to give up what they believe in, and, little by little, you have tyranny.

Tyrannies start with a little leaven.

This is what Jesus taught.

I don’t know why the Church is afraid of confronting the homosexual agenda, unless, of course, the church itself has been infiltrated with the leaven. Remove first the leaven in yourselves.

And isn’t “loving sodomites” also telling them of the dangers? Consequences of Homosexual Sex: death and disease accompany promiscuous and unsanitary sexual activity. The Seattle sexual diary study reported that homosexuals had, on a yearly average:

3. Experienced 68 penile penetrations of the anus; and

No wonder 10% came down with hepatitis B and 7% contracted hepatitis A during the 6-month study.

Obituaries numbering 6,516 from 16 U.S. homosexual journals over the past 12 years were compared to a large sample of obituaries from regular newspapers. 23 The obituaries from the regular newspapers were similar to U.S. averages for longevity; the medium age of death of married men was 75, and 80% of them died old (age 65 or older). For unmarried or divorced men the median age of death was 57, and 32% of them died old. Married women averaged age 79 at death; 85% died old. Unmarried and divorced women averaged age 71, and 60% of them died old.

Two and eight-tenths percent (2.8%) of gays died violently. They were 116 times more apt to be murdered; 24 times more apt to commit suicide; and had a traffic-accident death-rate 18 times the rate of comparably-aged white males. Heart attacks, cancer, and liver failure were exceptionally common. Twenty percent of lesbians died of murder, suicide, or accident–a rate 487 times higher than that of white females aged 25-44. The age distribution of samples of homosexuals in the scientific literature from 1989 to 1992 suggests a similarly shortened life-span.