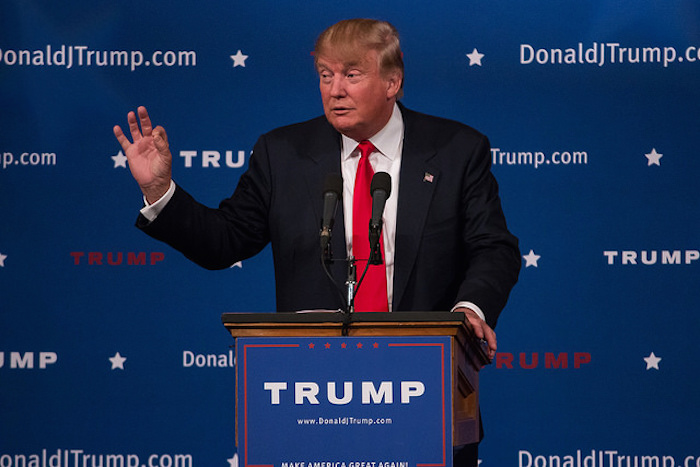 FRANKLIN, Tenn. (INTELLIHUB) — Republican Presidential Candidate Donald Trump packed the house Saturday for his speech which was held at the Factory, a venue typically used as a farmer’s market.

In fact the Factory was so full that “thousands” overflowed outside the venue’s doors into the rain. And although Trump’s security told him to not take selfies with people in the crowd, Trump did it anyways, letting supporters snap pics with him in the rain, forcing him to show up to the podium wet but in good spirit as the crowd cheered him on.

In his speech the Trumpster addressed the dishonesty of the corporate controlled press, pointing out how in most cases the mainline press is made up of some really bad people. Just like politics “it’s all talk,” said Trump.

Jumping forward Trump said, “I heard that Jeb Bush was down to four percent in the poll”, making fun of how it was a “good poll”, garnering laughter from the audience.

“I just took a deep breath and said let’s go do it, let’s make this country great again.”

Trump’s motto is much like Nike’s and I have to say he just does it.

Trump went on to explain how he has been leading the polls but made note of how his name is often left out of most headlines as they [the mainline press] say everyone else like “Carson” is “surging.”

‘Then there is this Iran deal,’ Trump said, going on to mention how the deal is a disaster. “It’s sickening what’s happening.”

Then there is the subject of “immigration”, the wall and so on.

“I know how to build, and I hear about the wall.”

“Not only will we build a wall, it will be a real wall.”

“And Mexico […] can’t believe how stupid we are”, they recently got a truck over the wall. The kind with the “smaller engine” to boot.

“So we are going to have a real wall […] the Great Wall of China was built 2000 years ago […] Israel has a wall that actually works,” Trump pointed out, it’s as simple as that.

Trump went on to talk about how we have to support illegal children born in America, with our tax dollars, for another “85 years” after they are born here.

Then there are the refugees.

I couldn’t help but notice but “they are all men”, said Trump, and “strong” ones.

“Why aren’t they back fighting for their country.”

They could be “ISIS […] there is no documentation” of who they are.”

Trump maintains, “If they come in and if I win they are going back.” [cheers from crowd]

The gulf states aren’t taking any of them [the refugees] and we are taking “two-hundred-thousand.”

Next Trump talked about how “we our going to take care of our Veterans” who are “being treated like third-class citizens, and they are our best people.”

Trump also detailed the fake war on terror and even talked a little about the 2nd Amendment and the recent school shooting in Oregon which Trump said was “a gun free zone.”

“I got to tell you if you had a couple of teachers or someone with guns in the room you would have been a lot better off.”

“The Second Amendment to our Constitution is clear, the right of people to bear arms should not be infringed upon period.”

“I am a very, very, big Second Amendment person, it’s very important to me.”

And “I’m going to tell you another thing, if I win you are going to be using the words Merry Christmas all the time,” this phrase has become politically incorrect and it’s wrong, said Trump.