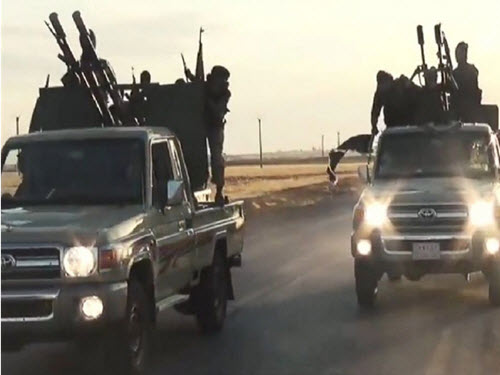 The U.S. Treasury Department’s “Terror Financing Unit” (wow, the name sounds like the unit that actually finances terror, how Orwellian) whose task it is to make sure Western goods don’t end up in the hands of terrorists is finally asking Toyota something we’ve all been wondering for a long time now:

Why do all these ISIS videos and pictures that come out look like Middle Eastern Toyota truck commercials?

U.S. counter-terror officials have asked Toyota, the world’s second largest auto maker, to help them determine how ISIS has managed to acquire the large number of Toyota pick-up trucks and SUVs seen prominently in the terror group’s propaganda videos in Iraq, Syria and Libya, ABC News has learned…

“We briefed Treasury on Toyota’s supply chains in the Middle East and the procedures that Toyota has in place to protect supply chain integrity,” said Ed Lewis, Toyota’s Washington-based director of public policy and communications.

By “a large number,” what they really mean is hundreds of them.

They mean that pretty much every time you see ISIS driving around with giant guns blazing anywhere in Syria, Iraq or Libya, they are doing it in a Toyota Hilux truck.

They mean that ISIS is literally patrolling the streets the way an army would in those countries not in tanks but in Toyotas.

They mean so many, someone even made a parody video about it on YouTube showing all the footage of ISIS driving around in Toyotas.

The Iraqi Ambassador to the United States, Lukman Faily, told ABC News that in addition to re-purposing older trucks, his government believes ISIS has acquired “hundreds” of “brand new” Toyotas in recent years.

Some of the trucks even bear the ISIS caliphate symbol on the side.

But Toyota claims they have a strict “do not sell to terrorists” policy and they have no idea how ISIS became the majority of the Middle Eastern Toyota customer base. They also claim they have no way to track stolen vehicles whatsoever, not even in 2015.