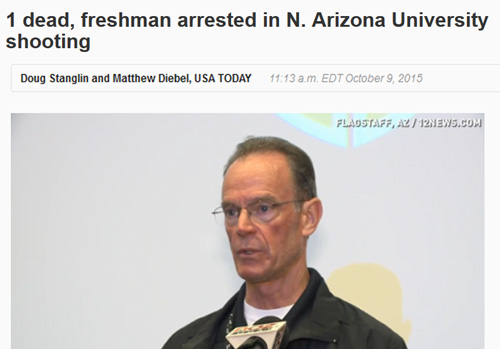 There was another school shooting Friday and it took top billing as the top news story of the day on all major networks. All press resources are apparently being directed to North Arizona University where one student is dead and three others are injured after a freshman opened fire on a group of students.

While this is being reported on with all the drama and caliber of a mass shooting like, say, the Oregon shooting, if you actually read the story, you’ll find out it isn’t the same at all.

Two groups of students got into a fight that escalated to this shooting. One of the groups involved Delta Chi Fraternity members. One guy had a gun. The suspect did not leave the scene and was promptly arrested without further incident according to USA Today. This is nothing like the traditional mass shooting that the media usually pounces on.

In fact, worse shooting altercation stories come out of Chicago on any given weekend.

So why is the media pushing this one as top story in America as if it’s another Columbine, Aurora, or Sandy Hook?

Probably to keep what’s going on with Russia and Syria out of the headlines.

Right now, Russia has reportedly disabled ISIS more in a week than the Pentagon has in over a year after spending billions. In fact, before Putin stepped in and called Obama’s bluff, projections were that we were about to spend $40 billion a year (cha-ching) “fighting” ISIS (read: payday for our defense contractors, more permanent war economy). The White House is quietly stepping away from “training” the “moderate rebels” we’ve been told is worth hundreds of millions of dollars. The White House has changed its story four times in four days on why the U.S. bombed Doctors Without Borders in Afghanistan, and now news outlets are sadly touting “unconfirmed reports” that Russian missiles missed Syria and hit Iran (something that has not been backed up by our State Department and which Moscow patently denies).

It all looks very pathetic for Obama and his disastrous “foreign policy”.

So back to Arizona. Never let a good crisis go to waste, huh? Already the media is trying desperately to draw parallels with Oregon, but it’s an entirely different situation.

And it’s tragic someone died, but the truth is more people will die and get injured driving on the highway today than died in shootings at NAU. So why politicize this?

Guess this latest incident will help further Obama’s plans for new gun control executive orders. If he gives a statement on this shooting at North Arizona University — when he barely bats at eye at personal altercation violence happening anywhere else in the country at any other time — you’ll know for sure.