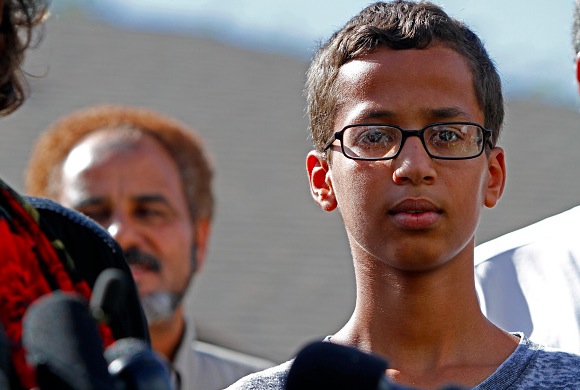 Well, it looks like it didn’t take long for some Islamic sympathizer, or maybe I should say Islamic stealth jihadist, to rear their ugly head following the fraud of clock-maker Ahmed Mohamed‘s test run at jihad, and yet, we aren’t hearing anything about the religion of pieces from the Obama administration. No sir, we aren’t hearing a peep.

According to CBS Dallas:

“There are consequences. We are a group of aircraft owners, operators and pilots who provide free emergency and non-emergency space available air transportation,” wrote one man. “Not for you (expletive)’s. All employees of Irving ISD and the Irving PD and their immediate family members are banned from our aircraft. That means that our members will watch your child die bleeding and convulsing on the Love Field tarmac.”

Another emailer pointed his words at police.

“If you do not stand down and back away from your position, I’ll be detaining police officers in your jurisdiction who possess any suspicious looking objects.”
Irving Police even received a letter from the group Anonymous.

There is no question that things were not handled in a way that would assume that little Mohamed’s fraud of a clock was a bomb, but there is no denying that he understood it would appear that way to many and acknowledged that. That is telling in itself.

As for Mayor Beth Van Duyne, she says that the public has not even seen the worst of the messages that were sent.

I’d say if emails were sent, especially the person claiming to be with emergency services, that those should be somewhat easy to track down and deal with the person quite easily.

As I pointed out before Texas is a center for pushing the Sharia on a Christian conservative state. Not only have we seen little Ahmed push through a dry run for look-a-like bombs, but we’ve seen the Garland jihad shooting, Muslims rise up in the face of Irving officials and demand that Sharia be allowed in Texas, a Sharia tribunal installed, and none other than Mohamed Elibiary, the Muslim Brotherhood supporting Islamic imam and former Homeland Security adviser to Bacha Bazi Barry, setting down in the Lone Star State. He’s been rather quiet, you know. One has to wonder if his fingerprints might be in any of this.

Frankly, it’s time for people to call these Islamists out. Stop hiding in the shadows and writing on walls. Stop being keyboard commandos and show yourselves so that we can just get on with putting your vile religion down where it belongs… in Hell. I’d just as soon get it over with rather than hear about all the things jihadis say they will do to Americans. Just remember, we’re not a panty-waist, mom jeans wearing sodomite like the current usurper-in-chief. There are no rules of engagement for the American militia once you come out of hiding, but we don’t have to talk tough to deal with cowards who murder innocent women and children and who cut the heads off of those whose hands are tied up. We don’t have to get our blood pressure worked up over the fact that you may or may not do this or that. Stop hiding behind your burqas and come on out. The nearest gun owner would probably have the same sentiments as Ann Barnhardt, who said “wear body armor. I have some new ammunition that I want to try out.”