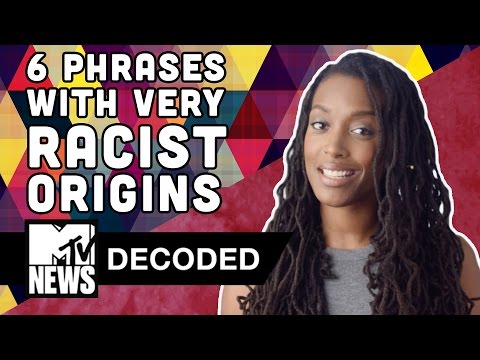 According to MTV News, using the phrases “long time no see,” “peanut gallery” and “no can do” is offensive because the terms have “racist beginnings.”

Host Franchesca Ramsey begins by claiming that the term “peanut gallery” is offensive because it was once the place where black people were “forced” to sit at the theater during segregation, despite the fact that the phrase has no racial connotations today whatsoever.

Saying “no can do” is also racist because it was used as pidgin English by Chinese immigrants in 1920’s America and subsequently “mimicked” by westerners. Ramsey provides no evidence at all that Chinese people are even remotely bothered by this, but gets offended on their behalf anyway.

Similarly, saying “long time no see” is also a “mimicry of pidgin English” and therefore represents a “nasty joke” aimed at Chinese people, despite the fact that virtually nobody using that phrase in the 21st century is even aware of its origins and has never used it in that way.

“Sold down the river” is also politically incorrect because of its association with slavery, while “hip hip hooray” is offensive due to a similar phrase being used at Nazi rallies.

Using the word “gypped” to mean being cheated or swindled is also racist because of its association with the Romani people. Referring to them as “gypsies” is a racial slur “which oppresses the Romani people,” according to Ramsey.

Ramsey also asserts that laws have been passed to target gypsies, despite the fact authorities routinely fail to enforce laws against gypsies when they camp on private property. The argument that gypsies being prone to petty crime and stealing is a racist stereotype is also debunked by real world evidence of gypsy gangs being involved in organized crime in numerous major European cities.

Despite spending five minutes frowning upon such phrases, Ramsey admits at the end of the video that they are “pretty harmless.”

As we have previously highlighted, the MTV News YouTube channel now has little to do with reporting on music and everything to do with re-educating young people to police their language and embrace political correctness. At least half of the videos featured on the channel are about racism and how white people are bad for using politically incorrect words or being offensive towards people of color.

In a past video, which can be viewed below, we critiqued MTV for regurgitating the nonsensical argument that it was impossible for black people to be racist towards white people.

According to former intelligence analyst Stella Morabito, political correctness is a tool for centralizing power, enabling, “cultural Marxists to capture the mediating institutions in our culture for ideological gain – the media, Hollywood, pop culture, academia and more.”

Political correctness creates “a semantic fog where manipulation can occur under the guise of being fair or non-discriminatory,” says Morabito.