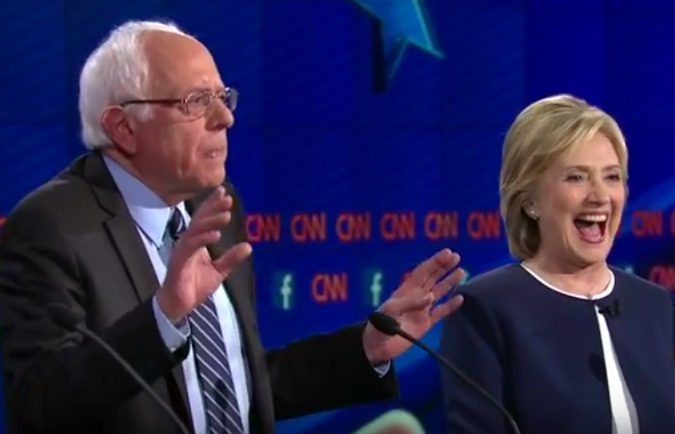 (INTELLIHUB) — In the days since the first Democratic National Debate, CNN, along with establishment pundits throughout the mainstream media, have fallen over themselves in praise for Hillary Clinton while attempting to decide for American voters who actually won the debate.

That’s right, instead of allowing the American people to actually choose a candidate, CNN is leading the way in continually claiming that Clinton not only won the debate but did so in such grand fashion that the primary is essentially over.

Immediately after the debate CNN turned to noted establishment pundit Gloria Borger (whose husband works within the military industrial complex) who went on to fawn over the “performance” of Hillary Clinton while downplaying how well Sanders did.

When Situation Room host Wolf Blitzer asked Borger for how she thought socialist Bernie Sanders did, Borger remarked that “he spoke to his supporters” but wasn’t “sure he made the case as to why he’s electable as a candidate” with situations like the “rough moment when Hillary Clinton surprisingly, to me, took him on gun control, an issue on which she’s been consistent and he has been inconsistent.”

Pivoting to Clinton, Borger had nothing but positive feedback for the former secretary of state: “I don’t think he was kind of ready for that attack from her and I think she did extraordinarily well. I agree with David [Axelrod]. She was so adept at making herself the candidate of both experience and change. It’s kind of hard to do that.”

Blitzer immediately expressed his agreement with Borger by declaring that Clinton “clearly…was prepared” because “[s]he had gone through rehearsal after rehearsal getting ready for this” and “anticipated, clearly, these questions that were said to her and the criticisms she would get from some of the candidates.”

The fact that this is happening despite the fact that Bernie Sanders literally won every single online poll as well as all the focus groups that took place after the debate is causing a sort of liberal revolt within the Democratic Party by members who are fed up with having corporate, Wall Street shills positioned as their presidential candidate.

The progressive media watchdog group FAIR even published an article that details the fact that liberal establishment pundits have called the debate for Hillary despite all notions of actual reality.

What the Times and these pundits failed to mention is the fact that every online poll we could find asking web visitors who won the debate cast Vermont Sen. Bernie Sanders as the winner—and not just by a small margins, but by rather enormous ones.

Seventy-one percent of participants in Slate’s online poll, for example, favored Sanders, while only 16 percent preferred Clinton. Time’s web poll of nearly 2 35,000 had Sanders at 56 percent and Clinton at 11 percent (Webb: 31 percent).

At Daily Kos, which caters to hardcore partisan Dems, 56 percent of nearly 22,000 participants said that Sanders won, vs. 38 percent for Clinton. MSNBC’s poll of 18,000 had Sanders at 69 percent and Clinton at 12 percent.

Sanders also showed appeal among the visitors to right-leaning sites: The conservative Drudge Report found that of more than 315,000 people, Sanders polled at 54 percent and Clinton at 9 percent (former Sen. Jim Webb got 25 percent). A poll by KSWB-TV, Fox’s San Diego affiliate, found that 78 percent of 45,000 respondents thought that Sanders won, as opposed to 15 percent who favored Clinton. The Street, a financial news website, found that 80 percent of 13,000 respondents dubbed Sanders the winner, while only 15 percent thought Clinton won.

A perfect example of the outright lying and shilling that is now happening on supposed progressive news websites is the series of articles written by hard left extremist feminist Amanda Marcotte for the now laughable clickbait rag Salon.com.

After immediately declaring Clinton the winner, Marcotte was then forced to go on the defensive after being called out for her pro Clinton shilling. Of course instead of actually reporting the truth Marcotte went on to insinuate that anyone that doesn’t think Clinton won is just being sexist.

This is why the glass ceiling persists, because there’s a lingering belief that even the smartest woman somehow will fall short of what a merely competent man can do. It clearly comforting in some corners to believe that Clinton only did well because her male opponents, out of ineptitude or fear of offending feminists, let her win the debate. But it’s also untrue.

Ignore all the polls, ignore all the actual data, Amanda Marcotte has spoken and if you do not agree you hate women! This is the kind of Jedi mind trick like propaganda establishment liberals are now employing to force Clinton on the American people regardless of what voters actually want.

Perhaps the most obvious and direct sign that CNN as well as the mainstream media as a whole are in the can for Clinton is the fact that the cable network has been caught deleting upwards of hundreds of comments in support of Sanders from their Facebook page.

Already feeling the news network’s coverage had become rabidly pro-Hillary in the aftermath of last night’s debate, Facebook users leaving reactions on CNN’s page are now continually re-posting them, knowing they will be quickly removed. There are hundreds in a seeming battle with the network, with no explanation as to why.

Some users and messages appear to be specifically targeted, especially those accusing CNN of having conflicts of interest that make it naturally inclined to back Hillary.

In particular, they’re citing last night’s initial Facebook poll data showing Bernie had won the debate handily. They are claiming the network is now burying that information in today’s coverage.

All in all it is an undeniable fact that CNN and other major news outlets are shilling for Clinton while denying the American people the right to actually choose the winner. This is politics in America circa 2015 and if the independent media doesn’t continue to counter this obvious shilling we will find ourselves being ruled over by a corrupt, evil human being.

Note: MRCTV.org actually caught up with CNN’s Don Lemon and asked him if there is a media bias for Clinton. His response was predictably laughable, especially when you see the clips gathered together in the video below.

Another important note post-debate is that even the audience seemed to be pre-selected in favor of Clinton as she drew the loudest cheers throughout the night despite mostly saying the same things as the other candidates. And remember, the DNC has limited the debate schedule to six debates specifically to protect Clinton.

A vote for Clinton is a vote for Wall Street and the national security state. Progressives throughout the country are going to have to ask themselves if that is what they want for the country for at least four more years.