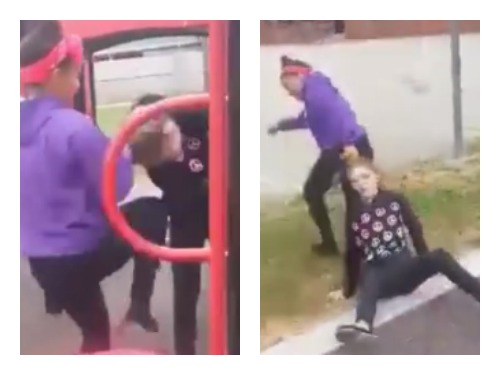 You may have seen this video going around the Internet. If you haven’t, be warned: It’s a pretty vicious video of a 12-year-old girl beating up another little girl, dragging her around by her hair and kicking and punching her as the victim offers absolutely no resistance and does not fight back at all.

(In other words, it’s pretty hard to watch, because innately, you wish like hell the whole time that the victim would fight back and beat the crap out of this bully.)

The video has been viewed over 8 million times in the past few days.

Well, unlike many of these videos where you see it and wish you hadn’t because then you have to wonder days later whether or not the aggressor will ever be held responsible for his or her actions, at least in this case there is some justice.

The 12-year-old bully involved has been arrested and the authorities are taking this one a lot more serious than a mere case of bullying. She has been charged with felony assault on school property. Her first court appearance was yesterday, Friday, Oct. 16.

The other kids who stood around laughing and filming are currently under investigation at their respective schools as well. The girl’s father is trying to claim that the video “doesn’t tell the whole story” of what happened before filming began, but come on.

If this little girl thinks she’s going to be able to trot around acting like this in juvenile detention, she can think again. Just wait until someone bigger, stronger, and tougher does fight back…

The world is a much harsher place than an empty schoolyard.