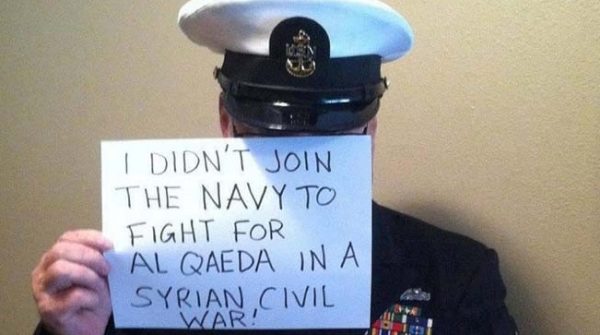 A group of former U.S. service members called the Veterans For Peace issued a letter to the American public and President Obama yesterday. In it, they outline reasons for the Unites States to immediately end the war in Afghanistan and elsewhere and call on the public to step in to ensure it happens. The entire letter is included below:

“President Obama’s decision to prolong the U.S. led war in Afghanistan only ensures U.S. responsibility for more death and destruction. Veterans For Peace condemns the decision and calls on the U.S. public to say no to more war.

Today, President Obama commented, ‘I do not support the idea of endless war, and I have repeatedly argued against marching into open-ended military conflicts that do not serve our core security interests.’ But Veterans For Peace asks, what is this policy but endless war? The U.S. has been fighting in Afghanistan for over fourteen years. What can fewer than 10,000 service members do that more than 100,000 could not? Al-Qaeda is a non-factor in Afghanistan and the Taliban are Afghans. U.S. presence in Afghanistan ensures more Afghan deaths and delay in reduction of violence so that civil society can be rebuilt and peace and justice can begin to take hold. War, Mr. President, has not worked. If you don’t believe in endless wars and you want to be a true Nobel Peace laureate to be looked up to and admired for working for peace in the face of pressure to continue down the road of war, Bring Our Troops Home and put all of the weight and power of the U.S. behind building peace.

In his remarks, the president referred to the Taliban and the people of Afghanistan as if they are two different groups. The truth is that the Taliban represent a portion of the Afghan people. The Taliban are Pashtun tribesmen. Pashtuns are also the majority in Afghanistan. This makes it very difficult to combat the Taliban as they have many sympathizers and supporters who may not actively fight the U.S. backed government, but will not support it.

It is clear that U.S. led efforts in Afghanistan have given more people reason to join the Taliban. A Carnegie Endowment for International Peace 2009 question and answer piece explained, people… ‘join because the Afghan government is unjust, corrupt, or simply not there. They also join because the Americans have bombed their houses or shown disrespect for their values. For young people, joining the Taliban is a way to earn social status.’

That was written six years past, and little has changed. Just two weeks ago on October 3, 2015 the U.S. bombed a Doctors Without Borders Hospital in Kunduz Afghanistan killing twelve medical staff, ten patients and wounding thirty-two others. This type of incident is not uncommon. Amnesty International’s 2014/15 Annual Afghanistan Report says, ‘ISAF and NATO forces continued to launch night raids and aerial and ground attacks, claiming dozens of civilian lives, despite completing the handover of responsibility for security to the Afghan National Security Forces (ANSF) in June 2013.’

The report goes on to say.[sic] ‘There were significant failures of accountability for civilian deaths, including a lack of transparent investigations and a lack of justice for the victims and their families.’ An October 14th New York Times article reports that, ‘Mr. Ghani is not popular among Afghans. And the problems in his government — like corruption and incompetence — run so deep that fixing them will take years, possibly decades.’ Trust of the Afghan government has not increased among the people it claims to represent.

It is true that anti-government forces are responsible for the vast majority of civilian deaths. However, continuing the war does not increase the possibility for reduction of violence to save lives. This makes coalition forces and the opposition complicit in every death. There is little chance of defeating the Taliban because they will not stop fighting until the foreign invaders are gone and there are not enough Afghans willing to possibly die in support of the U.S. backed national government.

Concerns about the threat of ISIL in Afghanistan must be met with more effective efforts to end the violence and wars in Iraq and Syria. U.S. global policy of endless war is merging into a global response of violence. We need a global response that meets human needs and aspirations. War is not the foundation on which to build peace. U.S. efforts have proven that war is the breeding ground for more violence and hatred. We demand a peace plan, Mr. President. We are not war weary, we simply know it does not work.

Finally, there are U.S. service members and families upon whose shoulders this failed and derived policy of endless war will continue to fall. U.S. military personnel have sacrificed enough in blood on the battlefield; wounded and killed. They are burdened with executing a no win strategy. When they come home they face unemployment, homelessness, recovery from physical and mental wounds and high rates of death by suicide. The Department of Veterans Affairs is already overwhelmed, unable to meet the needs of our brother and sister veterans. This policy ensures more of the same on the home front as well. Mr. President, it is clearly time to end this and all U.S. wars. Bring Them Home and Take Care of Them When They Get Here.”

Veterans for Peace is a non-profit anti-war group whose members include U.S. military veterans. You can find their website here.