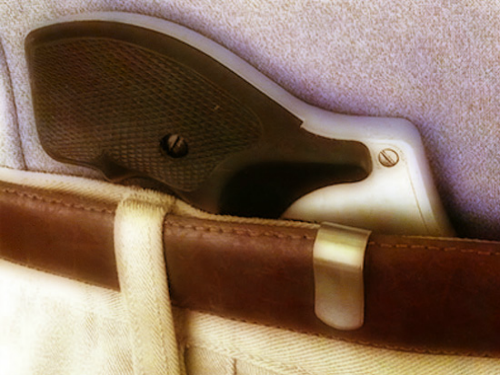 Congratulations Maine! Beginning this week, you will become the 8th state or territory to allow some form of unrestricted concealed carry in public places. All residents aged 21 or over will no longer need a permit to carry a pistol or revolver on their person, when traveling on foot or in their vehicles. There are a few exceptions such as courthouses, schools, federal buildings, state parks, etc. But for the most part, so long as you’re legally allowed to own a firearm, you’re good to go in the State of Maine.

And contrary to what many of the gun grabbers would have you think, the state isn’t going to turn into a Mad Max free-for-all any time soon.

“This is a poor piece of legislation that we’re all about to suffer through,” Portland Police Chief Mike Sauschuck toldlocal news station WCSH6.

Ryan Reardon, Interim Kennebec County Sheriff, said he has “some concern” but supports the law overall. “I think the scrutiny for weapons should be at the point of purchase,” he told the Portland Press Herald.

Previously, carrying a concealed handgun required a police-issued permit. To get one, a gun owner needed to undergo a background check and fingerprinting, take a gun safety course, fill out a six-page application and pay a $35 fee.

Advocates for the law say worries about safety are unfounded.

“People think all of a sudden it’s going to be the wild, Wild West,” Jeff Zimba, a firearms policy consultant and gun safety instructor who testified in support of the new laws,told the Bangor Daily News. “We’re finding just the opposite — people are signing up for safety courses. They want more education. They’re all saying doomsday, but we’re seeing just the opposite.”

For gun rights activists though, there is another reason to celebrate even if you’re not a resident of Maine. One could consider conceal carry rights to be a bellwether for all firearm rights. After all, letting someone carry a gun without official training or sanction is one of the biggest responsibilities that a government can relinquish to the citizenry. It’s a sign that your government (at the state level anyway) trusts you to take care of your own safety, and is willing to loosen its monopoly on the use of force. If your state allows this, then it’s probably moving in a promising direction for Second Amendment Rights.

So why should gun owners across the nation be ecstatic about this development? Because Maine is a somewhat liberal state, and the only liberal state to allow constitutional carry other than Vermont. When you start to see developments like these show up in left leaning states, it means that pro-gun activists are winning the debate across the board. In fact, the pro-gun crowd has been winning this battle for a very long time, despite the best efforts of the gun grabbers. Take a look at how concealed carry laws have changed in this country over the past 30 years.

That’s a very clear, long-term trend in favor of the Second Amendment. While Americans have lost countless rights in the same period of time, we’ve held on to our right to bear arms with a death grip.

The fight is hardly over of course. Attacks against the Second Amendment have been escalating in recent years, while some states have still managed to tighten their grip on firearms in other ways. But as public opinion slowly shifts in the favor of gun rights, and liberal states like Maine start to loosen their laws, the future of gun rights in America is looking good. So keep up the fight, because in the big scheme of things, we are winning.