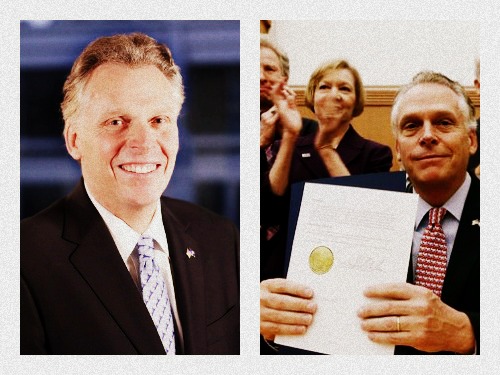 How many gun laws are there these days? That’s disputed, because some like the Brookings Institute claim that, while there are 20,000 gun laws on the books, there are truly only 300 “relevant” ones.

Still, even with hundreds of “relevant” gun laws, and a government that has some 70 armed agencies, the people in power just continue to arm agencies and pass more gun laws for everybody else (as if law-abiding citizens are the ones committing gun crimes).

The order not only establishes a joint task force to prosecute gun crimes in addition to a establishing a see something, say something-esque tip line “that will enable citizens to report violations of the gun laws and to collect a reward for any successful prosecutions flowing from the information provided,” but it bans the lawful open and concealed carry of firearms within certain state buildings.

After signing the order, McAuliffe leaned back and kissed Barbara Parker, mother of reporter Alison Parker, on the cheek as Andy Parker clapped.