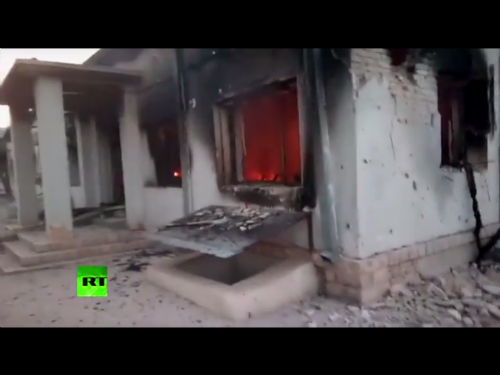 It’s been two weeks since US forces bombed a ‘Doctors Without Borders’ hospital in Kunduz, Afghanistan, killing 22 staff members and patients. The organization has since called the incident a potential war crime, and has demanded an impartial international investigation. Obama apologized for the bombing last week and promised a full investigation, but has denied their request for an independent inquiry by international parties.

But before any investigation could be held, a funny thing happened. On Thursday, a US armored vehicle arrived on the scene and forced its way into the ruins of the building. Doctors Without Borders said the intrusion was in violation of an agreement they had with US forces, which guaranteed that they would be “given notice before each step of the procedure involving the organization’s personnel and assets.” They added that “their unannounced and forced entry damaged property, destroyed potential evidence and caused stress and fear for the MSF team.”

The vehicle apparently contained a delegation of US, NATO, and Afghan investigators. So essentially, every force that might be blamed for any wrongdoing with the bombing, sent a representative in an armored vehicle, which potentially destroyed evidence of their actions. Sounds awfully convenient, don’t you think?