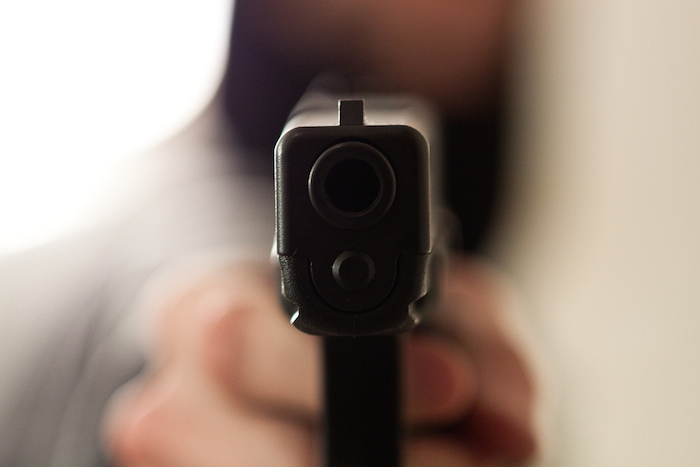 “I BELIEVE THAT BEING SHOT SHOULD BE A REQUIREMENT FOR GUN OWNERSHIP IN AMERICA. IT’S VERY SIMPLE.”

(INTELLIHUB) — In what will go down as one of the most disgusting, hate filled articles ever published on the hard left clickbait rag Salon.com, an author and liberal college professor has written a piece that calls for all gun owners to be shot.

No, you did not read that incorrectly and this is not hyperbole.

The article, written by Coppin State University teacher D. Watkins, not only calls for all gun owners to be shot but also ridiculously compares them to slaveholders while claiming that there is no legitimate reason to own a weapon.

Starting out the article with the writers dreams of charging five thousand dollars per bullet, Watkins then makes his position on gun ownership in America startlingly clear. (emphasis mine)

Rock was definitely on point, $5000 bullets would be great but I’d take it a step further––I believe that being shot should be requirement for gun ownership in America. It’s very simple. You need to have gun, like taking selfies with pistols, can’t live with out it? Then take a bullet and you will be granted the right to purchase the firearm of your choice.

If we could successfully implement this rule, I guarantee the mass shootings will stop. Watching cable news now in days makes me physically ill.

Week in and week out we are forced to learn about another coward, who can’t stand to deal with the same rejection that most of us face–– so they strap themselves with guns and then cock and spray at innocent people. Heartbroken survivors and family member images go viral, as our elected officials remain clueless.

He then goes on to attack the usual right wing boogeyman (Carson and Trump) before making yet another patently false statement that shows his complete ignorance on the actual facts of gun ownership. Watkins, like so many other clueless authoritarian liberals, simply does not understand gun ownership and its connection to freedom and liberty.

Bullets are extremely hot and they hurt. I saw them paralyze, cut through faces, pierce children and take life. I have friends, relatives and loved ones be gunned down. Guns break apart families and ruin lives.

Other than giving a coward the heart to stand tall, what’s the positive part of gun ownership? Other than the people in rural areas who use them to hunt for food, I have only seen them destroy, both in the suburbs and in our inner cities.

Watkins only sees them destroy so the millions and millions of other American citizens who do not share his opinion should be shot!? It’s almost as if Watkins has decided to lift the veil and publish a piece chalked full of the actual thoughts that liberal authoritarians share with each other on a regular basis.

Not wanting to have his call for all gun owners to be shot to be the only unbelievably messed up thing in his hate piece, Watkins then compares all gun owners to slaveholders in a transparent attempt to label those he disagrees with as racists. (a tried and true tactic of the authoritarian left)

Gun praisers are just like the people who were in favor of slavery back in the day–– the elite, lazy and ignorant who weren’t being beaten, raped or in the field doing the work, so they were perfectly okay with involuntary servitude, which is a problem and why I think gun owners need to feel more––they need a taste of the other side.

Got that gun owners. You are elitists, you are lazy, you are ignorant, and most of all you are like a slaveholder for owning those terrible firearms!

In case the reader thought that they may had just misread what the author meant in the beginning of the article, Watkins closes by reiterating his belief that all gun owners should be shot. (emphasis again mine)

So if you love guns, if they make you feel safe, if you hold and cuddle with them at night, then you need to be shot. You need to feel a bullet rip through your flesh, and if you survive and enjoy the feeling­­––then the right to bear arms will be all yours.

Ironically, this hate piece was published by a news outlet that routinely labels anyone that they disagree with as dangerous, violent racists. Apparently they are not worried about calling for millions of Americans to be shot just as long as those Americans are on the other side of the political aisle.

The above quoted piece is a perfect example of how gun control advocates really feel about millions of America gun owners and should be a wake up call to anyone still on the fence over whether or not gun control fanatics are just calling for “common sense” reform rather than full-scale confiscation and attacks on actual gun owners.

It is also important to note that the call for gun owners to be shot is possibly tied directly to the recent promotion of Australian style gun control by the mainstream media. Australia initiated a massive mandatory buyback program (also known as confiscation by government force) after a mass shooting and one can imagine Americans would not be so keen to turn in their weapons if a similar law were passed in this country.

Attempting to implement this type of gun control in the United States is an obvious recipe for civil war and gun owners who refuse to go along with the confiscation would be subject to violence at the hands of the government. (see all gun owners being shot)

But hey, we are all just crazy right wing extremists for worrying about gun control, even as the media calls for mass confiscation and gun owners across the country to be shot.