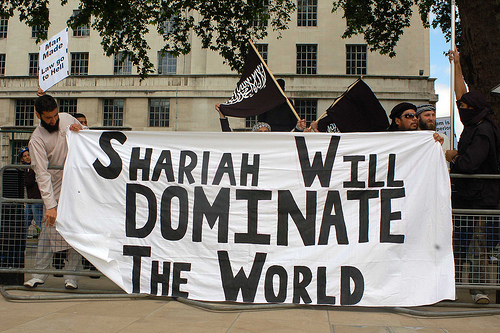 The threat is very real to impose Islamic Sharia law in America and thankfully at least sixteen states realize the threat and are seeking to squash it before it can gain any more momentum.

Back in September, Texas stood up against any foreign law being implemented, including Sharia, and cries of the Muslims were heard across the nation, including those from designated terror group the Council on American-Islamic Relations (CAIR). But Texas wouldn’t back down and have determined that they won’t have Sharia enforcement in their state.

Alabama banned Sharia after voters passed a measure to add an amendment to their state constitution. We hope they’ll stand for that a little better than they did their marriage amendment.

So far, these states have bills before their respective legislatures to put a halt to Islamic law being imposed in their states and it was CAIR that identified them in in a report:

Birmingham attorney Eric Johnston, who drafted the amendment to the Alabama constitution said, “Your constitutional rights are not affected by it. We’ve got a religious freedom amendment in Alabama. All it says is pay attention to the religious freedom amendment. Women’s rights are compromised by Sharia rights if a lawyer in a custody case says, ‘Islam requires you to do this.’ It’s a help to judges. It doesn’t create any new laws.”

Of course, CAIR, as a Muslim Brotherhood front group whose goals are the destruction of America from within, engages in taqiyya and claims that these bills are “virulently racist” and “outright hostility towards Muslims,” but nothing could be further from the truth. First, Islam is an ideology, not a race. There is but one race, the human one. However, ethnically, Islam is embraced by members of all ethnicities similar to how Christianity is. Should we start calling CAIR racists bigots who show hostility towards Christians when they demand and get prayer in public schools, but blast Christians for offering an off campus Bible study?

Sadly, it is socialist Democrats who are aiding the Islamists in their attempts to implement Sharia. Just take a look at my own state of South Carolina.

Americans see what is becoming of the United Kingdom and several countries in Europe and they don’t want that going on here in the united States. In fact, these bills are actually unnecessary since the law has already been established. Our Constitution already provides for shutting down Islam at its core. If Islamists want to cause an uprising because they want to undermine the law, that’s what the militia is for, putting down insurrections and repelling invasions. It’s really that simple. There is no need for these bills.

However, at least symbolically, it represents that there is still some fight left in the American people to oppose the teachings of Mohammad being implemented in their states. To that end, I’m glad to see my fellow Americans standing their ground.