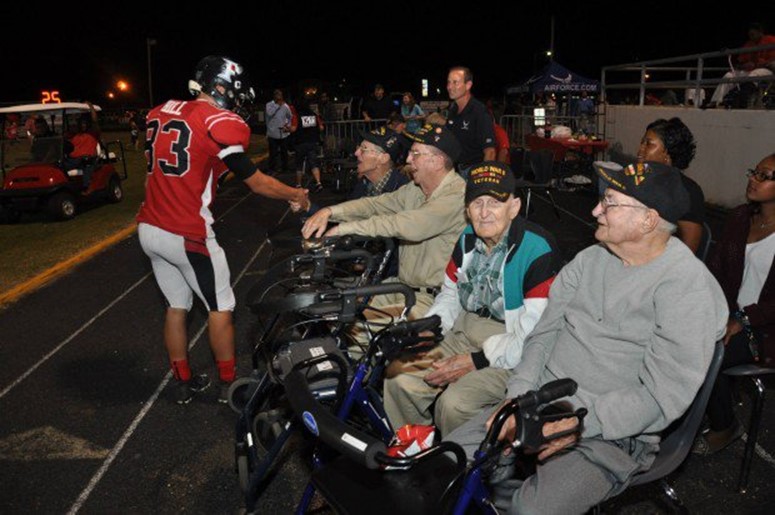 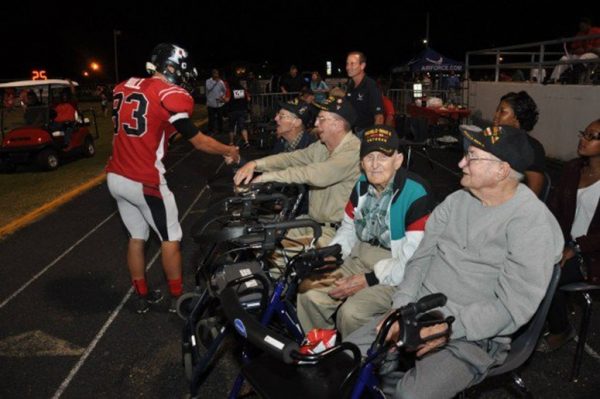 A week ago last Friday evening, at a high school football game in Louisiana, veterans from the Korean War and World War II were brought in and given sideline seats to the game, along with having a special tribute played in their honor by the Parkway High School band. However, it was the actions of one of the young players that delayed the game from being played and had such an impact that even the Sheriff’s office took pictures and sent the story viral.

Several pictures were taken that night of various members of law enforcement and students with the veterans. But one particular picture seems to have melted the hearts of thousands of people.

The image shows PHS football player #83 Chase Hill breaking away from the pack to shake the hands of the veterans. The players were returning to the field to start the second half when Hill reportedly made a bee-line for the group. The picture has been shared over 2,000 times on the Bossier Parish Sheriff’s Office Facebook page and has over 200 comments giving kudos to the young man for his respect.

The veterans, all residents of Northwest Louisiana War Veterans Home in Bossier City, were honored by the Parkway High School AFJROTC staff and cadets.

The Bossier Parish Sheriff’s Office then posted these great pictures:

While working security at the Parkway/Captain Shreve football game Oct. 8, the school resource officer and other…

Members of the Army, Navy and Air Force were all represented among the veterans.

While many fail to acknowledge the sacrifice of our veterans in the cause of freedom, especially among this generation, it’s nice to see that there are still some young people who get it.