Have you noticed that the United States and Russia are heading in two very different directions?  United behind a very strong leader with an 89.9 percent approval rating, Russia is stunning the world with the efficiency with which it is striking ISIS in Syria.  Of course Vladimir Putin is far from perfect, and there are real questions about what Russia’s true motives in Syria and elsewhere are, but this is a leader and a country that have shown that they can get things done.  In the U.S., on the other hand, we are being led by a weak, ineffective con man in the White House that has just a 45.3 percent approval rating.  Under Obama, the federal government seems to be inept at just about everything, and this is especially true when it comes to foreign policy.

It has gotten to the point to where it is really embarrassing to be an American.  The Russians know this and aren’t afraid to gloat about it.  In fact, one Russian commentator even suggested that Barack Obama isn’t “a real man”, and it is hard to argue with that.

Personally, I definitely don’t agree with everything that Putin does.  But when it comes to the global stage, it seems like he is playing chess while Obama is playing checkers.

And of course what is playing out in Syria right now is the latest example of this.  Russia’s bombing campaign has accomplished in just a few weeks what the Obama administration was either unwilling or unable to do in over a year.  The success of this campaign has propelled Putin to unprecedented heights of popularity.  The following comes from a Russian news agency…

“The approval rating of Vladimir Putin’s activities has set a new record of 89.9 percent, breaking the previous record set in June 2015 [of 89.1 percent],” VTsIOM reported.

The pollster said that the most important factor in the high approval rating was due to Putin’s efforts in Syria, including airstrikes targeted at the Islamic State jihadist group.

Unlike in the United States, war tends to make leaders even more popular in Russia.

That may sound strange to you, but people think very differently over there.  In Russia, people are actually proud of their country and proud of their military, and when the Russian military is doing well that reflects well on the current leadership.

Understanding that, it makes sense that Putin’s numbers have soared since the beginning of last year…

In January 2014, shortly before the start of the crisis, Vladimir Putin had a 65% approval rating. Since then, his approval rating has skyrocketed to a stunning 89%, even as Russia’s economy is facing sanctions related difficulties. This is an all time high for him, with his previously highest approval rating being 88% in 2008, shortly after victory in the Russo-Georgian War.

In Syria, the Obama administration had been hoping to use some combination of ISIS and other Islamic terror groups to overthrow the Assad regime.

Obviously that is not likely to happen now, and the Russians are calling out the Obama administration over this disgraceful strategy.  Just check out what Putin had to say about this when he recently spoke with reporters…

Speaking today at the International Valdai Discussion Club’s 12th annual meeting in Sochi, Putin delivered a sweeping critique of military strategy and foreign policy touching on everything from the erroneous labeling of some extremists as “moderates” to the futility of nuclear war.

“Why play with words dividing terrorists into moderate and not moderate. What’s the difference?,” Putin asked, adding that “success in fighting terrorists cannot be reached if using some of them as a battering ram to overthrow disliked regimes [because] it’s just an illusion that they can be dealt with [later], removed from power and somehow negotiated with.”

For so long, the American people have greatly underestimated the Russians.

Yes, the Russian Bear was wounded at the end of the Cold War, but now it is back – more ferocious and more determined than ever.

I want to share with you an extended excerpt from a piece that I came across on Jim Quinn’s Burning Platform.  This piece was translated from Russian, and it was originally entitled “Why The Russians Cannot Be Defeated”.  I think that you will quickly see why I am sharing this…

Then why do we, Russians, are able to part with life so easily when looking the enemy in the eye?

It’s laid down in our historical memory, starting with the time when the first aggressor set foot on our Russian soil. It has always been like that. Since the beginning of time.

Only the chainmail and the helmets are different, spears have been replaced by assault rifles. We have tanks and we have learned to fly. But the memory remains the same. And it is activated whenever someone wants to destroy or capture our home. The memory also bothers us when the weak are abused.

How does it work? Alarm bells inside of us start ringing, which only we can hear. The memory continues to ring until the uninvited guests are expelled from our land.

Then the most important thing happens. Inside each one of us a warrior awakens. Every one, from the meek to the powerful. This is what ties us with invisible threads. Foreigners will not understand it. You have to BE Russian, be BORN one.

When our land is in danger, or when somewhere on Earth someone is being harmed, be in in Angola, Vietnam, or Ossetia, our snipers become the most accurate and tankers—fireproof. Pilots become aces and recall such unlikely feats as ramming attacks and stall tactics. Our reconnaissance soldiers accomplish miracles, sailors become unsinkable, and infantry appears to be composed of stalwart lead soldiers.

And every Russian, without exception, becomes a defender. Even the oldest of men and the youngest of children. Recall the grandpa from Novorossia, who fed the enemy with a jar of honey filled with explosive. That’s a real story. We have a country full of such warriors.

Therefore anyone who expects to attack the Russians and to find them waiting on bent knees, welcoming the invaders with loaves of bread and flowers, will be sorely disappointed. They will see an entirely different picture. I don’t think they will like it.

They will see our grandfathers, fathers, husbands, and brothers. Behind them will be their mothers, wives, daughters. And behind them will be the heroes of Afghanistan and Chechnya, the soldiers of the Great Patriotic War and the First World War, the fighters from Kulikovo Field and the Battle on the Ice. 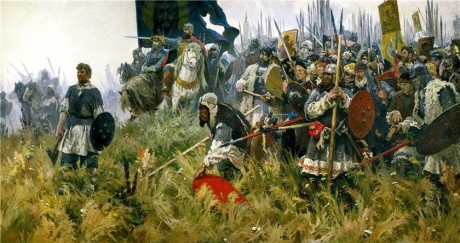 Let’s look at Bubnov’s painting “The Morning on the Kulikovo Field”. Note the formation of the Russian regiments: the front rows consist of elders, behind them are the younger generations, the young, healthy, and strong warriors who represent the army’s main force. It’s an ancient, Scythian combat order, a brilliant conception from the psychological point of view. The first rows will be the first to perish when making contact with the enemy, one might say they are suicide warriors since they are wearing white shirts and have almost no armor. That’s where the saying “don’t get ahead of your dad on the way to hell” comes from.

The elders are supposed to die before the eyes of their grandsons, the fathers before the eyes of their sons, and their death will fill the hearts of the young with battle frenzy, adding the element of personal revenge. The word “revenge” [mest’] comes from the word “place” [mesto], it’s a purely military term describing the young warrior taking place in formation that was left empty by the killed elder.”

Because we are Russians…God is with us!

These are the people that we want to mess with?

I couldn’t imagine many Americans speaking like this about their own nation today.  Most Americans won’t miss a meal for their country, much less being willing to lay down their lives.

At one time we could take comfort in our vast military superiority over Russia, but that advantage is now almost entirely gone.

And at one time we had the high moral ground over the Soviet Union, but today Russia is calling us the new “evil empire”, and they have some very valid points.

Earlier this year, I reported that a survey had found that 81 percent of all Russians now view the United States negatively.  Not even during the days of the Cold War had that number been so high.

Tensions between our two nations are rising, and the Russians are united behind a very strong leader that gets things done and that doesn’t mess around.

What have we got?

Perhaps we shouldn’t be so arrogant.  We don’t exactly have a winning hand.