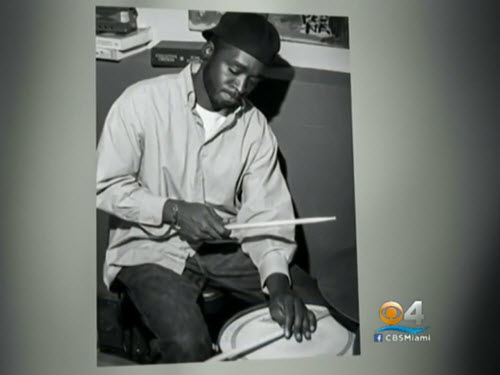 A popular 31-year-old church drummer waiting for a tow truck near his broke down car on the side of the highway at three a.m. was killed when a plainclothes officer fired six shots at him.

When Corey Jones’ car broke down on Interstate 95, Palm Beach Gardens Police Officer Nouman Raja, clad not in a police uniform but in jeans, t-shirt, and a baseball cap, showed up on the scene in an unmarked van with tinted windows and no police lights.

How could anyone deduce that guy was a police officer unless he had something with which to formally identify himself? The family’s attorneys say they do not believe Officer Raja announced who he was or ever showed a badge.

Via the Sun Sentinel:

“We believe Corey went to his grave not knowing if this was a real cop,” said Benjamin Crump, a high-profile civil rights attorney representing Jones’ family…

Police, on the other hand, say that Raja pulled over because he thought the car was abandoned, and that Jones confronted Raja with a gun which prompted the officer to open fire.

But did Raja ever announce himself to be a cop? If some dude in jeans and a t-shirt just shows up on the side of the road after three a.m. in an unmarked rape van while you are there like a sitting duck in a broke down car filled with your expensive musical equipment and the guy never mentions “Oh, by the way, I’m a cop” or backs that up with a badge to prove it — wouldn’t you consider drawing your weapon to protect yourself as well?

Jones, a man with no criminal history beloved by his friends and coworkers at the Delray Beach Housing Authority where he worked for eight years, had a concealed carry permit and kept a gun to protect himself while transporting his band gear and gig payments between concerts, never fired a single shot.

Jones was hit with three of six bullets the plainclothes officer fired at him. Jones’ body was found 80-100 yards from his car. His unused gun was found between himself and his car.

Raja’s unmarked van did not have a dash cam (surprise, surprise), but the exit ramp area where the incident occurred is near lots of businesses and the intersection had traffic cameras.

The State Attorney’s Office is conducting its own independent investigation into Jones’ death. Hundreds of people gathered yesterday for a peaceful protest outside Palm Beach Gardens Police Department as the family awaits more answers on the case.

Then you have this guy:

[Law enforcement consultant George] Kirkham said it is not unusual for a plainclothes officer in an unmarked vehicle to stop and check out a suspected abandoned car. While an officer likely would announce that he was a police officer,that wouldn’t necessarily mean immediately producing a badge, Kirkham said.

So, we’re all just supposed to assume or expect a guy in an unmarked van with tinted windows wearing street clothes who pulls over behind us at three a.m. in an already vulnerable situation might be a cop?

And if someone emerges with a gun, “that’s a shoot situation,” said Kirkham, who has testified as an expert witness in police shooting cases.

But shouldn’t officers immediately announce themselves in that situation if they are in plain clothes with no law enforcement identifiers on their vehicles in the middle of the night? And then back that up with a badge?

That guy could’ve been anybody, and anybody would’ve likely reacted the same way as Jones.

More than three people are killed by cop on average every day in this country.

You would think in the modern American police state climate we’re all living in, plainclothes officers in unmarked vans with tinted windows with no dash cam would find something else to do with their time rather than check out broke down cars on the side of busy highways in the middle of the night…

But hey, if that’s how they want to spend their time, shouldn’t there be regulations requiring they immediately produce a badge upon exiting the vehicle at the very least to make sure stranded motorists know they are police (who are, in that situation, supposed to be there to help, not shoot people).

Good to know that if your car breaks down on the side of the highway in the middle of the night, you too can wind up dead this way so easily at the hands of those to are supposed to be “protecting” and “serving”.