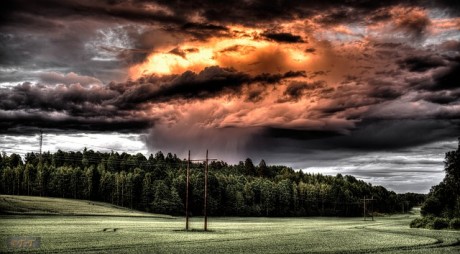 Have you noticed that things have gotten eerily quiet in the month of October?  After the chaos of late August and early September, many had anticipated that we would be dealing with a full-blown financial collapse by now, but instead we have entered a period of “dead calm” in which things have become exceedingly quiet in almost every way that you can possibly imagine.  Other “watchmen” that I highly respect have made the exact same observation.  Even though the economic numbers are screaming that we have entered a global recession, they aren’t really make any headline news.  A whole host of major financial institutions around the planet are currently in danger of collapsing and creating the next “Lehman Brothers moment”, but none of them has imploded just yet.  And of course Barack Obama seems bound and determined to start World War III.  On Monday, it was announced that he is sending a guided missile destroyer into Chinese waters in the South China Sea.  The Chinese have already stated that they might just start shooting if this happens, but Barack Obama doesn’t seem to care.  But until the shooting actually begins, that is not likely to upset the current tranquility that we are enjoying either.

To me, what we are experiencing at the moment would best be described as “the calm before the storm”.  If you are not familiar with this concept, this is how it is defined by How Stuff Works…

Have you ever spent an afternoon in the backyard, maybe grilling or enjoying a game of croquet, when suddenly you notice that everything goes quiet? The air seems still and calm — even the birds stop singing and quickly return to their nests.

After a few minutes, you feel a change in the air, and suddenly a line of clouds ominously appears on the horizon — clouds with a look that tells you they aren’t fooling around. You quickly dash in the house and narrowly miss the first fat raindrops that fall right before the downpour. At this moment, you might stop and ask yourself, “Why was it so calm and peaceful right before the storm hit?”

Like so many others, I believe that a great storm is coming, and yet right at this moment things seem so peaceful.

Unfortunately, this period of peace and quiet is not going to last for long, and most Americans know deep down that something is seriously wrong with our nation.  In fact, a new WND/Clout poll has found that 85.3 percent of all likely voters in the United States believe that our country is going in the wrong direction…

The poll found 92.6 percent of those who identified themselves as conservative believe the nation is on the wrong track. Among those who call themselves liberal, 90.9 percent said it is going the wrong direction.

When asked what they think of the American economy after seven years of Obama’s leadership and economic policies, nearly 80 percent described it as “very fragile” or “somewhat fragile.”

Self-identified Democrats, Republicans, liberals and conservatives were in general agreement, with about 75 percent to 80 percent describing the economy as “somewhat fragile” or “very fragile.”

But even though we are steamrolling in the wrong direction, we haven’t suffered any incredibly serious consequences for it yet.

For the moment, this is allowing the mockers to have a field day.  They are fully confident that Barack Obama and the Federal Reserve knew what they were doing after all, and they are gleefully taunting those of us that have been warning of the great disaster that is heading our way.

However, those that are wise are getting prepared.

I think that we could all learn some lessons from what Overstock.com Chairman Jonathan Johnson is doing. The following is an extended excerpt from a recent Zero Hedge article…

One week ago Johnson, who is also candidate for Utah governor, spoke at the United Precious Metals Association, or UPMA, which we first profiled a month ago, and which takes advantage of Utah’s special status allowing the it to use gold as legal tender, offering gold and silver-backed accounts. As a reminder, theUPMA takes Federal Reserve Notes (or paper dollars) which it then translates into golden dollars (or silver). The golden dollars are based off the $50 one ounce gold coins produced by the Treasury of The United States. They are legal tender under the law and are protected as such.

What did Johnson tell the UPMA? Here are some choice quotes:

So what do we do as a business so that we would be prepared when that happens. One thing that we do that is fairly unique:we have about $10 million in gold, mostly the small button-sized coins, that we keep outside of the banking system. We expect that when there is a financial crisis there will be a banking holiday. I don’t know if it will be 2 days, or 2 weeks, or 2 months. We have $10 million in gold and silver in denominations small enough that we can use for payroll. We want to be able to keep our employees paid, safe and our site up and running during a financial crisis.

We also happen to have three months of food supply for every employee that we can live on.

Why would such a seemingly intelligent and successful CEO of a large Internet company do such things?

It is because he can see the writing on the wall.

This period of calm will not last.  A great storm is coming, and when it does arrive those that have not prepared for it are going to suffer tremendously.

Most people have no idea just how fragile our system really is.  Today, some of these “too big to fail” banks supposedly have trillions of dollars in assets, but if you want to withdraw $10,000 or more in cash you have got to give them 24 hours notice to get enough money…

This is just the beginning. As anyone can tell you, it’s all but impossible to move large amounts of money into cash in the US. Even the large banks will routinely ask you for 24 hours notice if you need $10,000 or more in cash. These are banks will TRILLIONS of dollars worth of assets on their books.

And with each passing day we see even more signs of the global economic slowdown that is emerging all around us.  For example, we just learned that the China Containerized Freight Index has dropped to the lowest level ever recorded.  China accounts for more global trade than anyone else, and so this is a very clear sign that global economic activity is slowing down dramatically…

By early July, the index dropped below 800 for the first time in its history, which started in 1998 when the index was set at 1,000. It soon recovered to about 850. And just when bouts of hope were rising that the worst was over, it plunged again and hit even lower levels.

But for those that don’t want to believe that hard times are on the way, they can take comfort in the eerie period of calm that we are experiencing right now.

What they don’t realize is that this truly is “the calm before the storm”, and the global economic crisis that is ahead of us is going to be far beyond what most people ever dared to imagine was possible.