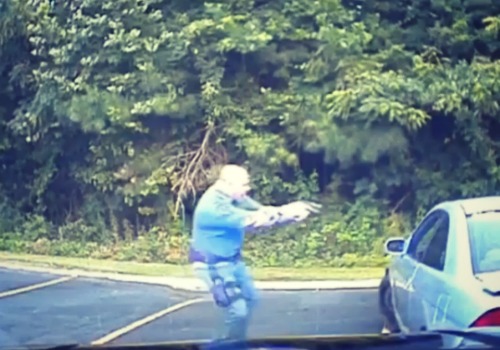 Earlier this year, we reported on the senseless death by cop of teen Zachary Hammond who was shot at through his car window multiple times at point blank range by Lt. Mark Tiller of Seneca Police Department.

Hammond was on a first date when he pulled into a Hardees restaurant drive-thru in Seneca, South Carolina, unaware the police had set up a drug sting inside the fast food restaurant. Police blocked his car in with a patrol vehicle…

Tiller claimed he had to shoot Hammond because his life was in danger, as he believed Hammond was going to run over him. The forensic evidence in the case, however, totally contradicted that statement.

Now, clearly, the video of what happened does too.

Dash cam footage has now been released in this shooting.

Tiller can be heard saying, “Stop, stop, stop… I’m gonna shoot your f***ing ass” as an unarmed Mr Hammond tries to drive away.

Hammond tries to drive away, by the way, racing his car wide purposefully to avoid Lt. Tiller. The video clearly shows that Tiller was never once in front of Hammond’s vehicle to be hit by it.

Somehow, this use of deadly force has been deemed “justified” by tenth circuit solicitor Chrissy Adams.

“Zachary Hammond failed to comply with Lt. Tiller’s orders and as a result he lost his life.”

“When Hammond made the conscious decision to flee a lawful stop he set in motion this tragic chain of events.”

The suspect was… a freaked out unarmed teenager with a gun in his face driving away. Fleeing. All true. But he was unarmed and this was not about some violent crime, it was about a drug bust for a little marijuana, something that, in several other states is perfectly legal.

So the worst thing that could’ve possibly happened if Tiller let Hammond drive away without shooting him multiple times at point blank range and killing him would be…?

The video proves Tiller gave a dishonest version of events in an attempt to justify unjustifiable use of deadly force. Tiller’s life wasn’t in danger; he just didn’t want Hammond to get away.

Hammond’s family is still hoping that an independent federal investigation will bring charges in this case.

We live in police state insanity. Cases like this just keep being ruled in police favor when clearly use of deadly force was not justified.

The system wants you to know that if you don’t immediately follow police officer orders no matter what without questioning them like a good little slave, then you deserve to be murdered for not complying.