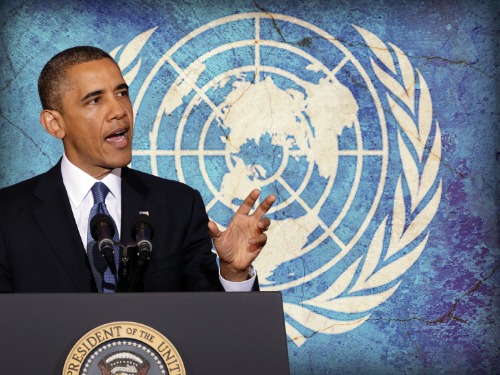 From the “In Case You Missed It” files…

President Obama was on the CBS News show “60 Minutes” a few weeks back when the topic turned to Putin and Russia’s role in Syria.

Steve Kroft: A year ago when we did this interview, there was some saber-rattling between the United States and Russia on the Ukrainian border. Now it’s also going on in Syria. You said a year ago that the United States– America leads. We’re the indispensable nation. Mr. Putin seems to be challenging that leadership.

President Barack Obama: In what way? Let– let’s think about this– let– let–

Steve Kroft: Well, he’s moved troops into Syria, for one. He’s got people on the ground. Two, the Russians are conducting military operations in the Middle East for the first time since World War II.

Steve Kroft: bombing the people– that we are supporting…

Obama went on to claim that when he came into office, Ukraine was governed by a corrupt “stooge of Mr. Putin,” but Kroft brings it back around.

It’s like he doesn’t even hear the b.s. coming out of his mouth.

But hey, at least Al Gore would be proud.

Who cares about the Asian and European destabilization due to the disastrous US-led regime change against Assad, regime change that even war criminal Henry Kissinger is warning is a bad idea… Climate change is destroying the world too, ya know!

You know what would change the climate real quick? World War III.

Incredulously, Obama also went on to say this:

“America is a safer place… than when I came in office. In terms of protecting ourselves against terrorism, in terms of us making sure that we are strengthening our alliances, in terms of our reputation around the world, absolutely we are stronger.”

Obama also claimed he was always skeptical of his $500 million plan to arm and train the Syrian rebels.

Oh, and the government doesn’t get the impression Hillary was trying to hide anything with a private email server, something he would say wouldn’t he, considering that thousands of Hillary’s emails have now been released but none of them are the ones exchanged between her and the president.