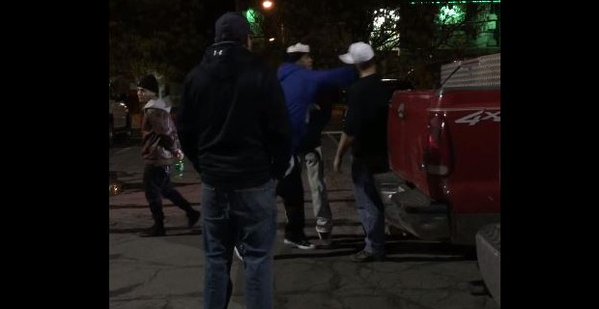 Imagine if two African-Americans had been assaulted by a confederate flag-waving white biker gang for carrying a ‘Black Lives Matter’ protest sign.

Imagine if the incident had been caught on camera, with a black man being punched unconscious by one of the white men.

The story would be a national news item for days, maybe even weeks.

But two days after sensational video emerged of a gang of black men assaulting two white men in Salt Lake City for a tiny confederate flag decal displayed in their truck window, not one national media outlet in the U.S., besides Fox News, has touched the story.

“The truck belonged to Kelly Leeper’s friend. Leeper was in town for the Garth Brooks concert. On Sunday, he said [he] looked out the window of his room at the Red Lion and saw a group of black men near his friend’s truck,” reports Fox 13.

Concerned about the $50,000 worth of welding equipment in the back, Leeper and his friend went out to the parking lot.

The pair were then confronted by the gang over the tiny confederate flag sticker. An argument ensued before Leeper’s friend was viciously punched in the face, knocking him out. Leeper himself was then assaulted by the gang of six men.

Sgt. Robin Heiden, spokeswoman for Salt Lake City Police Department, said the incident could potentially be treated as a hate crime. Authorities have a good chance of catching the culprits because a bystander was able to note down the plate number of one of their vehicles.

“Somebody thought to get a plate number as well and that’s really going to help in this case. I think we’ll probably be able to track down that vehicle,” said Heiden.

A Google News search reveals that the story has received zero attention from CNN, MSNBC, CBS, ABC News or any mainstream U.S. news outlet besides Fox.

Contrast this with how the media treated an incident back in June when a group of confederate flag wavers crashed a black child’s birthday party. Despite the fact that no violence occurred, the story was covered at length by NBC News, the Washington Post, CNN, CBS and numerous other mainstream outlets.

Whatever you think of the confederate flag, Leeper and his friend were fully within their First Amendment rights to display it without being violently assaulted.

“I’ll be damned if I ever come to Salt Lake again without bringing my gun,” Leeper asserted. “The point is it’s my right to drive what any kind of vehicle I want. If I want to fly the Confederate Flag, it’s my right.”

America has been beset by a spike in racial tensions ever since last year’s Michael Brown shooting and the subsequent riots in Ferguson.

However, just as the harsh reality of black crime statistics has been almost completely omitted from the national conversation by the establishment media, the continuing wave of black-on-white hate crime assaults has also been buried.

Why? Because it doesn’t fit the narrative that racists and extremists on both sides of the equation are exacerbating the problem, and by only laying the blame at the door of white people, the mainstream media is ensuring an escalation of the violence.