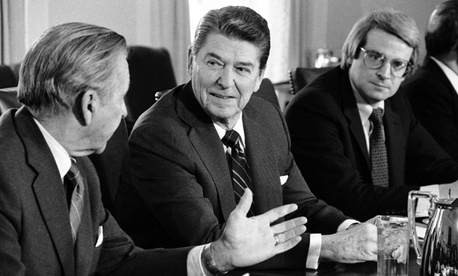 Why won’t the American people listen to the warnings?  David Stockman was a member of the U.S. House of Representatives from 1977 to 1981, and he served as the Director of the Office of Management and Budget under President Ronald Reagan from 1981 to 1985.  These days, he is running a website called “Contra Corner” which I highly recommend that you check out.  Stockman believes that a global “debt super-cycle” that has been building for decades is now bursting, and he is convinced that the consequences for the U.S. and for the rest of the planet will be absolutely catastrophic.  His findings are very consistent with what I have been writing about on The Economic Collapse Blog, and if Stockman is correct the times ahead of us are going to be exceedingly painful.

But right now, most people don’t seem to be in the mood to listen to these types of warnings.  Even though there is a mountain of evidence that the global economy has already plunged into recession, U.S. stocks had a great month in October, and so most Americans seem to think that the crisis has passed.

Of course the truth is that the stock market is not an accurate barometer of the economy and it never has been.  Back in 2008, almost everything else started to go downhill before stocks did, and the same thing is happening once again.  In a recent article, Stockman explained that stocks are surging to absolutely ridiculous levels even though corporate earnings are actually way down…

At this point, 75% of S&P 500 companies have reported Q3 results, and earnings are coming in at $93.80 per share on an LTM basis. That happens to be 7.4% below the peak $106 per share reported last September, and means that the market today is valuing these shrinking profits at a spritely 22.49X PE ratio.

And, yes, there is a reason for two-digit precision. It seems that in the 4th quarter of 2007 LTM earnings came in at 22.19X the S&P 500 index price. We know what happened next!

Why do so many refuse to see the parallels?

This crisis is unfolding so similarly to 2008, and yet most of the “experts” are willingly blind.

Much of the stock buying that has been happening in 2015 has been fueled by stock buybacks and by M&A (merger and acquisitions).  Many firms have even been going into debt to buy back their own stocks, but now sources of financing are starting to dry up.  This year we have already seen the most corporate debt downgrades since 2009, and big financial institutions are now becoming much more hesitant to loan giant stacks of cash to these large corporations at super low interest rates.

So it is very, very difficult to see how the equity markets are going to move much higher than they are right now.

Meanwhile, the global economy is starting to unravel right in front of our eyes.  In his recent piece, Stockman discussed some of these data points…

In the last two days we posted the latest data on two crucial markers of global economic direction——-export shipments from Korea and export orders coming into the high performance machinery factories of Germany.

In a word, they were abysmal, and smoking gun evidence that the suzerains of Beijing have not stopped the implosion in China, and that their latest paddy wagon forays—–arresting the head of China’s third largest bank and hand-cuffing several hedge fund managers including the purported “Warren Buffett” of China—-are signs not of stabilization, but sheer desperation.

So it is not surprising that Korea’s October exports—–the first such data from anywhere in the world—were down by a whopping 16% from last year, and have now been down for 10 straight months. Needless to say, China is the number one destination for Korean exports.

Likewise, German export orders plummeted by 18% in September, and this was no one month blip.

For many more recent statistics just like these, please see my previous article entitled “18 Numbers That Scream That A Crippling Global Recession Has Arrived“.

If the global economy really was doing “just fine” as Barack Obama and others suggest, then why is the largest shipping line in the world eliminating jobs and scaling back capacity?…

A.P. Moeller-Maersk A/S is scaling back capacity and cutting jobs in the world’s largest shipping line to adapt to a drop in demand.

The Danish company, which last month lowered its profit forecast for 2015 citing a gloomier outlook for the global shipping market, will shed 4,000 jobs in its Maersk Line unit as part of a program to “simplify the organization,” it said in an e-mailed statement on Wednesday.

And why are some of the biggest banks in the western world laying off tens of thousands of workers?…

Standard Chartered Plc became the third European bank in less than two weeks to announce sweeping job cuts, bringing the total planned reductions to more than 30,000, or almost one in seven positions.

The London-based firm said Tuesday it will eliminate 15,000 jobs, or 17 percent of its workforce, as soaring bad loans in emerging markets hurt earnings. Deutsche Bank AG, based in Frankfurt, last week announced plans for 11,000 job cuts, while Credit Suisse Group AG said it would trim as many as 5,600 employees.

And if things are so great in the United States, why is Target suddenly closing stores?

The truth, of course, is that things are not great.  Global GDP expressed in U.S. dollars is down 3.4 percent so far this year, and total global trade has plummeted 8.4 percent.

We have entered a major global economic slowdown, and like usual, equity markets will be the last to get the memo.

But when they finally do react, that is likely going to greatly accelerate our problems.  Just like we saw in 2008, when there is fear and panic in the financial markets that tends to cause the flow of credit to freeze up.  And that is something that we simply cannot afford, because the flow of credit has become the lifeblood of the global economy.

Rather, the truth is that “the crisis” is just beginning, and it will soon be making front page headlines all over the planet.