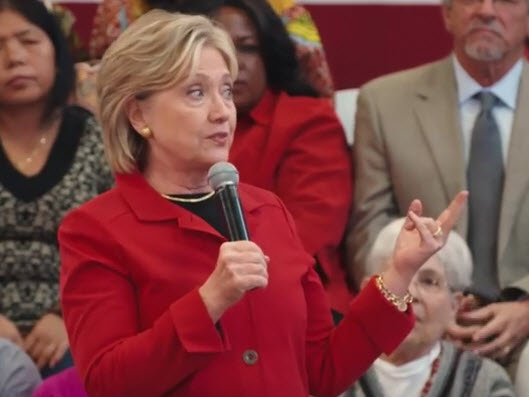 Hillary isn’t just doing campaign ads. It’s almost as if she knows she’s going to win and is telling you a list of what’s going to go down once she gets into the Oval Office.

For one, she just cannot wait to enact more gun control laws if she becomes president.

Regardless, it’s ironic, no? If she was given an opportunity to push the red button and blow up Iran (a prospect she has a hearty chuckle about in this video here), during which she’d end up killing a lot more people than the stats she quotes about gun deaths in the video below, she’d do it in a heartbeat.

In fact, more war is why Wall Street is backing Hillary (and Jeb) so hard.

You know, on a side note, people are starting to put those “I <3 H” bumper stickers on their cars and then drive around announcing that message to the world.