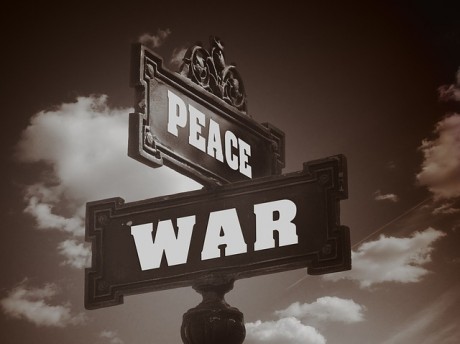 Christianity is under attack from a thousand different directions all at once, and yet many believers have turned their guns on one another.  This war among Christians seems to intensify with each passing year, and believers are often fighting for some of the stupidest reasons you can possibly imagine.  Meanwhile, people are leaving our churches in droves and church attendance is way down.  This is especially true of younger Americans.  According to an incredible new report that was just released by the Pew Research Center, only 27 percent of all Millennials (U.S. adults born since 1990) attend religious services on a weekly basis.  When you go into many churches in America on Sunday mornings, all you see are “the greys”, and I am not talking about space aliens.  But instead of focusing on fixing what has gone wrong, many Christians (including a number of very prominent ministers) spend most of their energy savagely attacking their brothers and sisters in Christ.  This is absolutely disgraceful and it needs to stop.

Atheism, agnosticism and other religions are on the rise in America, and Christianity is in decline.  And as I noted above, this is particularly true among our young people.  Here are some more numbers from an excerpt that I pulled directly out of the Pew report…

It has been projected that if current trends continue, the percentage of Americans attending church in 2050 will be about half of what it is today.

So those that are supposedly “leading the church” in America today need to wake up.  What you are doing is not working.  This nation is falling away from God, but many of you are spending much of your time and energy attacking one another.

Another thing that should deeply, deeply alarm Christian leaders is the fact that a large percentage of “believers” do not even seem to grasp the essential basics of the Christian faith.  I am talking about things like who God is, the plan of salvation and the authority of the Bible.  Here is more from Pew’s new report…

If other religions can lead to eternal life, then why did Jesus have to die on the cross?  Why couldn’t He have just come down and pointed us in the direction of all those other faiths?  Many Christians don’t seem to understand that Jesus had to die for us on the cross because there is no other payment for our sins.  He took the penalty that we deserved, and now He offers us a new life as a free gift.

Without Him, we would have absolutely no hope and no future.  But because of Him, our sins are forgiven and we have been given eternal life.

But a very large percentage of believers does not understand this.  Sadly, many Christians seem to think that you can believe whatever you want and it will all be okay in the end.

So as you can see, the church in America today is a mess.  As a Christian myself, this pains me greatly.

But instead of working to fix the problems and praying for revival, many believers seem to take glee in tearing down their fellow Christians.

One of the bad things about the anonymity of the Internet is that it gives people an opportunity to show what is really in their hearts.  And in many cases, what comes out of the hearts of many supposed “Christians” is absolutely frightening.

If you venture into places where believers hang out on Facebook, on Twitter, on YouTube and on various Christian websites all over the Internet, you will find some of the most vile things imaginable being said about specific individuals.

I have seen Christians use curse words to describe one another, and good, solid believers that I know personally have been called “whores”, “heretics” and “scumbags” just to give you a few examples.  There are even some “Christians” that publicly wish for their brothers and sisters in Christ to die and go to hell.

This kind of thing should not be happening.  In Matthew chapter 22, Jesus gave us instructions about how we are to treat one another…

36 Master, which is the great commandment in the law?

38 This is the first and great commandment.

39 And the second is like unto it, Thou shalt love thy neighbour as thyself.

40 On these two commandments hang all the law and the prophets.

On my websites I talk about some very hard things, but you will notice that I don’t attack specific individuals that are on the same side as me.  In this day and age, it is imperative that we all figure out who our friends are.  None of us are ever going to agree 100 percent on everything, and that is okay.

Yes, sometimes there are things that need to be addressed, but the vast majority of times they can be taken care of privately.  I have had some very honest discussions with people that are on the same side as me in private, but I would never air that stuff publicly.

If we are going to make it through what is coming, we have got to learn how to love one another.  And we have got to stop viciously attacking one another over stupid stuff.  Yes, there are some things that are so important that they must never be compromised on, but most of the attacks that I see happening are over very petty things.

And without a doubt, there are times when it become necessary to rebuke someone.  But when at all possible it should be done in private, and it should always be done in a spirit of love.

Because in the end, if we do not have love, we are nothing.  You can have all of the “knowledge” in the world, and you can go around correcting everyone else, but if you are lacking in love you are just a baby.

This is a hard lesson that I had to learn, and hopefully what I have written here will be helpful for someone.

This war among Christians needs to stop.  Our faith is under attack like never before, and we desperately need to learn how to start working together.

At some point, hopefully we will begin to actually live the words of our Savior in John chapter 13…

35 By this shall all men know that ye are my disciples, if ye have love one to another.