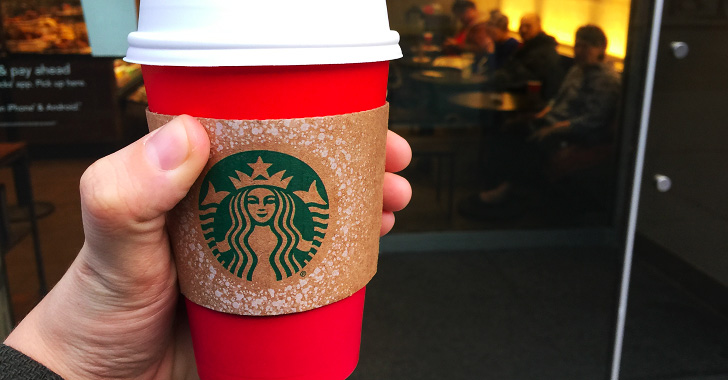 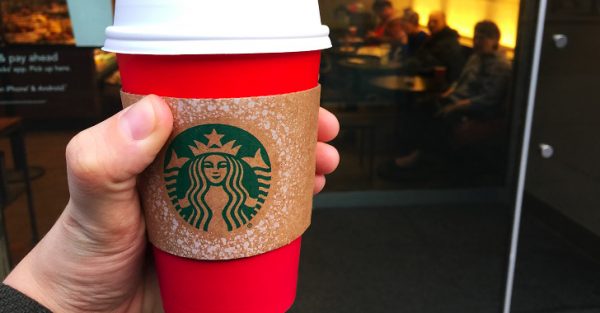 U.S. Inc. — When billionaire presidential hopeful Donald Trump inexplicably decided this week that boycotting Starbucks over the ‘de-Christmas-ization’ of their ubiquitous red holiday coffee cup was somehow a matter of national importance, the internet exploded — and American mainstream media fanned the flames.

People from every conceivable walk of life suddenly found themselves with a reason to rise up against the establishment coffee chain and scream in indignation about this newly-neutral — and cheerlessly Grinch-ified — affront to humanity. As if this inane insanity over an innocuous paper cup weren’t an embarrassing enough commentary on the U.S.’ populace’ lack of priorities — by Wednesday morning, the corporatocracy ever-so nobly answered the outrage: Dunkin’ Donuts unveiled its decidedly cheerful, appropriately Christmas-ized version of its holiday cup.

Yes, indeed. Starbucks’ apparent war on Christmas has now fully morphed into a de facto corporate Battle of the Paper Cups. People immediately responded by declaring their undying allegiance to either Team Grinch or Team Santa, conveniently ignoring the fact that these mega-corporations just figured out their most lucrative holiday marketing strategies — weeks before Thanksgiving even crossed people’s minds.

But the passion these warring coffee cup factions have managed to muster is indisputably misplaced, especially considering the bevy of pertinent issues that directly affect us all and are inherently more deserving of outrage. Though the month isn’t yet halfway behind us, there are already myriad concerns in need of your immediate attention — and none have anything whatsoever to do with a commercialized holiday that’s still well over a month away.

Here are five things exponentially more deserving of your indignation than a paper cup — no matter its design (or lack thereof):

Perhaps nothing encapsulates the sickening intrusion of crony-capitalism into our personal affairs more than the insidious, notorious TPP, which was dubbed the corporate power-grab of the century, even before the full text was released this week by the White House. At stake with this trade pact between the U.S. and 11 other countries is an economic coup that will drive 40% of the world’s GDP — at the expense of civilians worldwide.

First, the White House arbitrarily bumped Malaysia — a country that notoriously turns a blind eye to human slavery and sex trafficking, even of young children — from a Tier 3 worst violator of human rights to Tier 2, all in order to ensure its strategically important membership in the TPP. Then, President Obama signed Fast Track into law, literally eliminating the possibility Congress could amend or change anything in the enormous piece of legislation by forcing a simple up or down vote when the laughably-monikered free trade deal reaches the floor for a vote.

After years of tight-lipped negotiations by the 12 nations, during which time congressmen were denied access to the text unless they literally sat alone in a basement room where even note-taking was strictly forbidden, the full, complete text released this week rather astonishingly confirmed and amplified our worst fears. In fact, as Evan Greer of Fight For the Future (FFTF) warned, “If U.S. Congress signs this agreement despite its blatant corruption, they’ll be signing a death warrant for the open internet and putting the future of free speech in peril.”

And that’s only one section of this multi-thousand-page monstrosity. We suggest everyone who is able form study groups and tackle each section to get a firm grasp on this peril, which now seems destined for our collective future. Organized by category, the full text may be viewed via the Office of the U.S. Trade Representative here.

After repeatedly, even exhaustively, insisting he would not do so, President Obama recently announced the deployment of ground forces into Syria — and then magnified that hypocrisy by announcing the U.S. would increase air strikes in the war-weary nation. This military buildup, which is incidentally also slated for Iraq, had first been proffered as necessary to assist the ongoing international fight against the Islamic State in the region. But in order to do so, Obama admitted that buildup would function to “ensure that weapons and other supplies are delivered to the moderate forces whom the United States supports,” as an unnamed and unverified official told Reuters. Additionally, a report quietly confirmed Syrian rebel groups had employed chemical weapons in the region, though who, exactly, those rebel groups were and whether or not they are fighting at the behest of the U.S. remains unknown — or unstated.

U.S. State Dept. veteran and Middle East policy critic, Peter Van Buren, pointed to a similar mission and announcement in August 2014 concerning Iraq, touted as a brief, ostensibly humanitarian effort that was widely “believed” — though, as it turned out, that “was a lie.” Concerning the deployment to Syria, he advised we are “being told by that same president that Americans will again fight on the ground . . . in Syria, and that Americans have and will die. He says that this is necessary to protect us, because if we do not defeat the Islamic State over there, they will come here, to what we now call without shame or irony The Homeland.”

Though the official announcement claims only 50 combat troops will be deployed, there may still be time to voice opposition to further involvement by contacting your congressmen.

Despite mass media’s proclivity for accepting spoon-fed propaganda from anonymous government officials, as evidenced in its insistence immediately following the tragic bombing of the hospital that it had, indeed, been accidental, MSF (Doctors Without Borders) recently released a tellingly contrary report based on eyewitness accounts of the October incident. With descriptions of a plane shooting at victims, as well as the immediate aftermath of the bombing so plainly stated they brought tears to our eyes here at Anti-Media, the MSF report — which summarizes preliminary conclusions of an investigation into possible war crimes — justifiably pleaded for “a clear commitment that the act of providing medical care will never make us a target.”

No organization so unwaveringly committed to providing medical attention to any person who needs it, irrespective of national or group loyalty, should ever find itself in a position of needing to pose that question — much less live through the reality of what can now clearly be called a targeted strike. After the Pentagon repeatedly switched its official story in the days following the bombing — making apparent its need to figure out which story would best be believed by an apathetic populace — the report made clear the scope of the war crime committed in the bombing.

“We need to know whether the rules of war still apply,” stated the report. It’s an increasingly pertinent question whose answer seems shamefully obvious, especially when it was reported a U.S. ally somehow managed to accidentally bomb a second MSF facility in Yemen.

On Monday, Washington, D.C. District Court Judge Richard Leon nailed the coffin shut on the NSA’s bulk data collection, and did so in a most eloquent smackdown that thoroughly derided the agency’s hollow claims it needs the program to continue the dubious fight against terrorism. Edward Snowden, who blew the lid off the secret, insidious practice two years ago, immediately took to Twitter to voice his approval to millions of fans. He even highlighted passages of note taken directly from the ruling.

“This court simply cannot, and will not, allow the government to trump the Constitution merely because it suits the exigencies of the moment,” Leon stated in his Opinion. “Moved by whatever momentary evil has aroused their fears, officials — perhaps even supported by a majority of citizens — may be tempted to conduct searches that sacrifice the liberty of each citizen to assuage the perceived evil […] To be sure, the very purpose of the Fourth Amendment would be undermined were this court to defer to Congress’s determination that individual liberty should be sacrificed to better combat today’s evil.”

“It is the most disturbing thing I’ve seen,” Louisiana State Police Superintendent Col. Mike Edmondson flatly said about officers’ body camera footage at a press conference announcing the arrest of two cops involved in the shooting. Questions mounted after 6-year-old Jeremy Mardis and his father, Christopher Few, were inexplicably pursued and shot (18 rounds pierced the driver’s side door) by four officers.

After the two arrests, a rumored personal vendetta was confirmed with the revelation one of the officers involved had been relentlessly stalking Few’s fiancée. A second rumor that Few had his hands in the air at the time he and his son were shot was also confirmed. The pair of officers is currently being held on $1 million bond and have both been charged with second-degree and attempted second-degree murder.

Now hurry up and get back to that battle over disposable coffee cups.