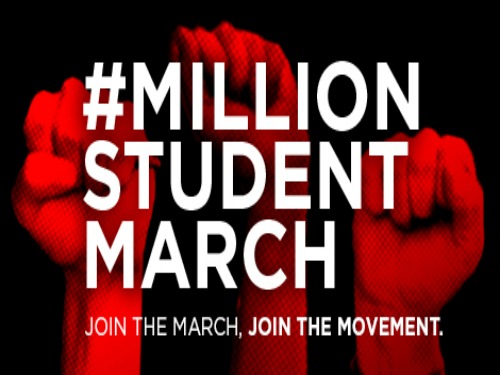 The pot is being stirred. It’s no coincidence that WAPO published an article two days ago about how college campuses are once again becoming “civil rights battlegrounds”. It’s also no surprise at all that the nationwide protest going down today is timed perfectly to piggy back off the media outcry over the University of Missouri protests, either.

In what is being called “a day of action,” a highly organized, scripted, and surely bought-and-paid-for #MillionStudentMarch is scheduled to take place on 106 colleges campuses across America today.

The #MillionStudentMarch movement has its own website at studentmarch.org started by Elan Axelbank, a Northwestern student and activist member of the Socialist Alternative movement who also has enough time on his hands as a student to co-found not only the Million Student March but 15 Now, a group that demands to “end poverty wages” by making the national minimum wage $15/hour.

The Million Student March demands free college tuition, a cancellation of all student loan debt, and not surprisingly, a $15 minimum wage for all campus workers. 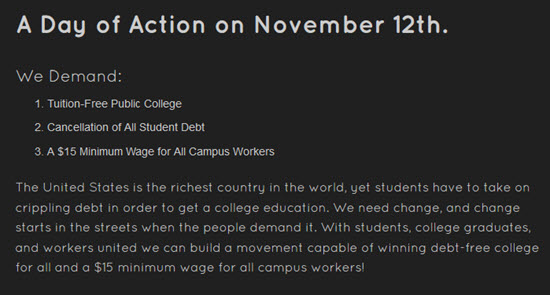 Marches have been organized under the movement from coast-to-coast:

The #MillionStudentMarch is described as a “grassroots effort” organized at the local level, but:

MSM is coordinated at the national level by a committee responsible for administration and communications, and that produces organizing materials and builds relationships with other activist groups and unions.

Wow. A “grassroots campaign” with a committee coordinating at the national level?

The so-called “grassroots campaign” even comes complete with an “organizing guide” to teach people how to organize their own march on their campus, not a quick feat as it includes 17 steps: 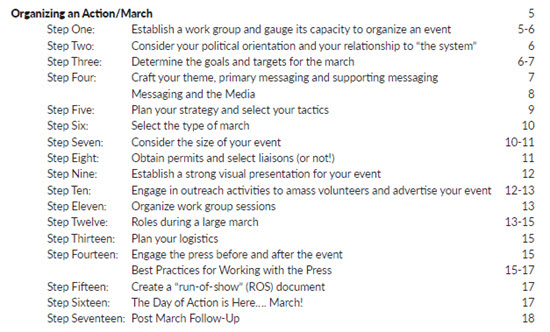 Under “Step Five: Plan Your Strategy and Select Your Tactics,” it says:

“Employing a variety of tactics – or actions – will increase the participation of first-time activists as well as radical veterans and make them all feel that their time and energy is well used.”

The section talks about marches, rallies, sit-ins and “direct actions”.

The appendix of the organizational guide for this student march also includes several helpful “readings and references,” including Saul Alinsky’s “Rules for Radicals,” Black Panther Party for Self Defense, Teaching with the Black Panthers’ Ten Point Plan, Pedagogy of the Oppressed, Tools for Radical Pedagogy, the General Assembly U.N. procedures and so on.

Have you figured it out by now that somewhere up the food chain this entire highly scripted, highly organized, national committee-led “movement” is not just some natural “grassroots campaign” concocted by a few pissed off college students buried in loan debt, but instead is a bought-and-paid for protest-in-a-box ala George Soros’ phony color revolutions?

Just like the highly scripted, highly organized movement in Ferguson after Michael Brown‘s shooting death by police, with protests held in 83 cities and even Canada which helped twist the official narrative into an official lie in the media, this is yet another way people like Soros, who has a penchant for funding professional agitators, is helping to divide and conquer.

It later came out that Soros spent $33 million on organizations which fueled the Ferguson protests… how much do you think he and his Open Society Foundation have “donated” to the organizations behind this one?

Don’t get me wrong. Do I wish my student loan debt was canceled? Sure. Do I wish my kids could go to college for free? That’d be swell. Would $15/hour minimum wages be nice for everyone? Gee, you bet.

But socialists never answer this question: who do they really think will end up paying for it all?

Because it isn’t going to be billionaires like George Soros.