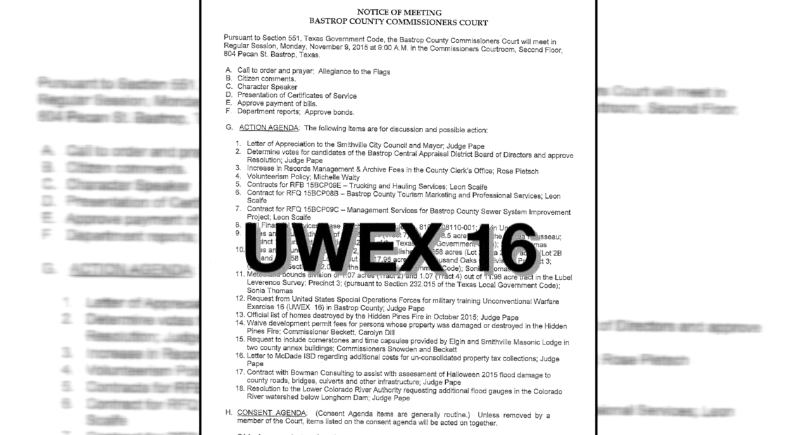 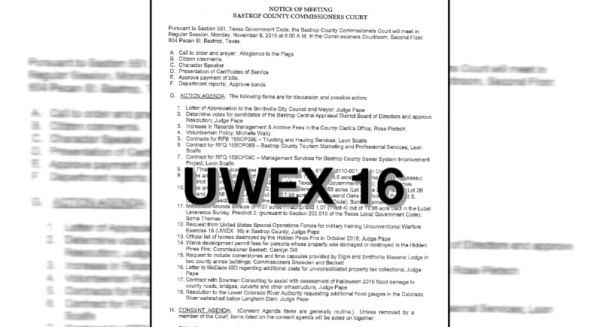 “Jade Helm 2.0″ begins to reveal itself and it doesn’t look good

(INTELLIHUB) — Fresh off the recent conclusion of the controversial urban military training exercise Jade Helm, military special forces are again preparing to train to take on the American people and they are using a familiar part of the country to do it.

On Monday, Bastrop County commissioners approved yet another request from United States Special Operations Forces to conduct covert urban military training in the region from March 10 to June 5, 2016, according to an article in the Austin American-Statesman.

The planned training, known as Unconventional Warfare Exercise or UWEX 16, is extremely secretive and will reportedly take place on private property as well as at Camp Swift.

Video of the council meeting confirms that the training is similar to the recently concluded Jade Helm and shows council leaders literally joking about allowing even more training with an obvious domestic focus.

Shockingly, (or perhaps not at this point) the council spent less than five minutes discussing UWEX 16 with a large part of that time spent cracking jokes about the military taking over the streets and the crazy conspiracy theorists coming out of the woodwork. (relevant info begins around the 38:20 mark)

In the short amount of time the council spent on the extremely important topic they completely ignored the long and documented reasoning for why this type of training worries citizens, instead opting for a military press release approved statement meant to insinuate that those against the training are against America when in reality we are attempting to stop the eventual takeover of it.

“The fact that it became a media event last time doesn’t change my feeling that we need to support military training so the men and women in the military can effectively protect us and the freedoms we enjoy in America,” County Judge Paul Pape said at the meeting.

Pape himself is apparently unaware or doesn’t care about the thousands of active and retired military personal that spoke out against Jade Helm, both in public and private. It’s also disgustingly Orwellian to see these idiots sitting around their council laughing about a training exercise that is OPENLY about preparing special forces for domestic deployment.

TEXAS IS NOT ALONE

In a startling twist to the story, All News Pipeline uncovered documents that prove that military special forces aren’t just planning martial law style training in Texas but across at least four other states as well. In other words, UWEX 16 really is Jade Helm 2.0 and this time it is even more secretive.

ANP reports that the concerned wife of a civilian who works at Fort Bragg contacted them in order to point them towards posts on a military contractors website that advertise the need for different types of role players to take part in urban warfare training drills throughout the country.

With names such as ‘Guerrilla Chief‘, ‘Underground Leader’, ‘Media Newspaper Writer‘,Resistance Force Leader‘ and ‘State Dept Representative’, the needed role players are clearly set to play the part of different citizens that special forces would encounter while taking over an American city. But remember, according to officials and the mainstream media, this is all normal training for overseas and there is nothing to worry about.

Some of the different places listed in the role player documents include Camp Rilea, OR, Fort Bragg, NC, Camp Bulls, Texas, Davis Monathan Airforce Base in Arizona, and unknown parts of San Antonio, Texas. Also, it is highly likely that in the near future more information on this new widespread urban military training will be released which will add even more states to the list. Keep in mind that a good chunk of this type of training will surely take part off of military bases and onto American streets, regardless of what one corrupt city commission claims.

With this new domestic focused training now revealed and surely to go viral it is also likely that various mainstream media outlets will begin to again spread misinformation while never missing a chance to connect a random conspiracy theory about the training to the fears of it as a whole. This has actually already started with a lame attempt at sarcastic humor by a dedicated shill at the Dallas Observer.

Going forward it is important to note that most legitimate independent news outlets (including Intellihub.com) never reported that Jade Helm was for sure going to go live and result in a martial law takeover.

What was reported and what remains the truth today is that training such as Jade Helm and UWEX 16 have a transparent and obvious domestic focus which means that special forces units are being ordered to train for an eventual confrontation with the American people.

The fact that Jade Helm was one of the biggest ever urban military exercises, coupled with the recent announcement of UWEX 16, shows that, for one reason or another, the powers that be have accelerated this training. Whether that be for an upcoming economic collapse, terror attack, or just straight up deceleration of martial law for as yet unknown reasons remains to be seen.

What do you think? Why have we seen an obvious increase in the amount of urban military training in recent years with UWEX 16 and Jade Helm being just the latest examples?