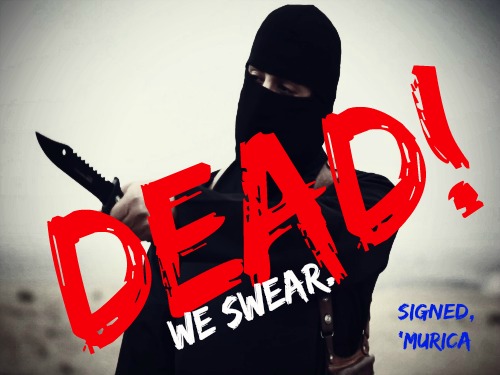 Today it’s all over the news that supposedly the ISIS chief executioner Jihadi John was killed by a “flawless” U.S. air strike targeting him.

Yes, “flawless” is the word that was widely publicized. In fact, ABC News is reporting ISIS’s star er, decapitator “evaporated” (yes, evaporated) when an air strike targeted his vehicle according to an unnamed U.S. official (always unnamed, but he’s “official,” so we should definitely believe every word he says).

Good thing there’s nobody to actually prove anything, huh? You know, what with him being all evaporated and such. What a great time to randomly find and kill off a heavily publicized boogeyman flawlessly, not unlike that one time Obama claimed he killed Osama bin Laden after holding off the raid at least two other times like it didn’t even matter when America finally took out the man it claims was responsible for 9/11 (probably because Osama died years ago)!

This remarkable (as in, unbelievable) new twist fits nicely in the ongoing ISIS propaganda narrative the government and its lapdog media are selling America… “Facts” like the terror group commonly lures women with kittens and Nutella spread, or that they were maniacally lowering hostages into tanks to drown them while sophisticated camera rigs captured their deaths underwater like cartoon villains in a Jerry Bruckheimer movie! (And don’t forget they were also putting explosive necklaces on hostages and blowing their heads off and locking hostages in cars then firing RPGs on them from a distance and filming that, too!)

And who could forget that time when former Defense Secretary Chuck Hagel once told reporters at the Pentagon that the “tremendously well-funded” terrorist group ISIS is “beyond anything we’ve seen,” scaring Americans into compliance with yet another unofficial war, this time in Syria (which couldn’t possibly be about the CIA attempting to topple Assad, oh no no no of course not).

In fact, ISIS was reportedly so sophisticated and powerful driving around the Middle Eastern countryside in their fleet of Toyota trucks, that the terror group managed to almost entirely allude the U.S. — a nation that supposedly has one of the most advanced military forces and one of the most pervasive high-tech surveillance networks on the face of the planet — and somehow ISIS only got bigger, gained even more ground, and grew stronger for over a year, costing America hundreds of millions in the “training of moderate rebels” to fight them in the meantime (and yet, somehow only ending up with five guys or so because the rest defected to, you guessed it, ISIS!)…

That is, of course, until Russia showed up last month and was able to somehow wipe out about half the terrorist group’s infrastructure in a week.