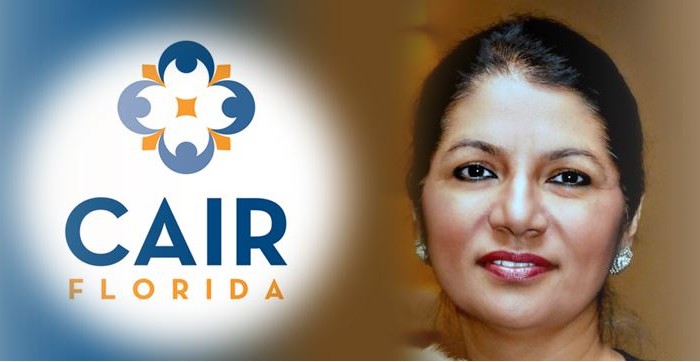 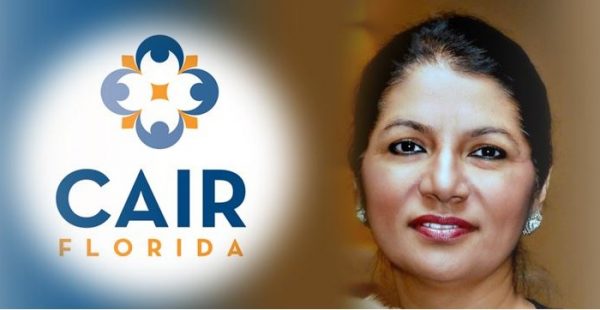 The fox isn’t just in the henhouse, he’s eating our young.

I have been warning of this for years. My book, Stop the Islamization of America: A Practical Guide to the Resistance, details how to fight back. We need an army of Davids.

Ghazala Salam is a local leader in the Council on American-Islamic Relations (CAIR). She also helps run annual events for Islamic Relief. Both CAIR and Islamic Relief have serious ties to global terrorist organizations. The two have been named terrorist groups themselves. Knowing this, it is inconceivable that Salam has been appointed to different advisory boards within the Broward County government and was named to a leadership position in the local League of Women Voters (LWV). It is time for Broward to purge itself of this terror-tied individual.

Ghazala Salam, who was born in India in 1965, is the Community and Government Relations Director for the Florida chapter of CAIR. She has served in this capacity since February 2011.

CAIR was established in June 1994 as part of the American Palestine Committee, a terrorist umbrella group headed by then-global head of Hamas, Mousa Abu Marzook, who currently resides in Egypt as Hamas’ number two leader. In 2007 and 2008, CAIR was named by the US Justice Department a co-conspirator for two federal trials dealing with the financing of millions of dollars to Hamas. Since its founding, a number of CAIR representatives have served jail time and/or have been deported from the United States for terrorist-related crimes. In November 2014, CAIR itself was labeled a terrorist group by the United Arab Emirates (UAE) government.

CAIR-Florida Executive Director Hassan Shibly has referred to Hezbollah as “basically a resistance movement” and “absolutely not a terrorist organization” and, in August 2014, wrote, “Israel and its supporters are enemies of G-d…” In July 2014, CAIR-Florida co-sponsored a pro-Hamas rally in Downtown Miami, where rally goers shouted, “We are Hamas” and “Let’s go Hamas.” Following the rally, the event organizer, Sofian Abdelaziz Zakkout, wrote, “Thank God, every day we conquer the American Jews like our conquests over the Jews of Israel!”

Islamic Relief has developed an extensive reputation for involvement with terrorism. The Russian government has accused Islamic Relief of supporting terrorism in Chechnya. Israel has banned the group, labeling it a Hamas front and arresting the organization’s Gaza Program Manager, Ayaz Ali, in 2006, for providing assistance to Hamas. Reports show that Islamic Relief has sent millions of dollars to and received tens of thousands of dollars from groups related to al-Qaeda. And like CAIR, Islamic Relief was named a terrorist group by the UAE government.

The Chairman of IRUSA is Khaled Lamada. Lamada is also the co-chairman of the Islamic Circle of North America and Muslim American Society (ICNA-MAS) national convention. ICNA has been linked to terrorist financing and has used the web to promote a number of terrorist groups, including Hamas, al-Qaeda, Hezbollah and the Taliban. MAS, like CAIR and Islamic Relief, has been named to the UAE government’s list of terrorist organizations. Lamada uses his Facebook page to advocate for such groups as the Muslim Brotherhood and Hamas.

Apart from her involvement with CAIR and Islamic Relief, Ghazala Salam has as well been associated with Darul Uloom, a radical mosque located in Pembroke Pines, Florida.

A number of al-Qaeda terrorists have spent time at Darul Uloom. “Dirty Bomber” Jose Padilla was a student at the mosque, and now-deceased al-Qaeda Global Operations Chief Adnan el-Shukrijumah was a prayer leader there. Maulana Shafayat Mohamed, the mosque’s imam, has been thrown off a number of boards in Broward County for his actions against homosexuals. In February 2005, an article written by him was published on the Darul Uloom website, entitled ‘Tsunami: Wrath of God,’ claiming that homosexual sex caused the 2004 Indonesian tsunami.

Al-Hikmat is the media arm of Darul Uloom. A video of Salam being interviewed by Shafayat Mohamed for Al-Hikmat was published on the mosque’s website in June. As well, Salam has been honored in the last three bi-monthly newsletters of Al-Hikmat, and she was the recipient of an award at the 2015 annual Al-Hikmat award ceremony in May. A photograph of her with Shafayat Mohamed is found on the website of the American Muslim Democratic Caucus of Florida (AMDCFL), a group that Salam presides over.

While Ghazala Salam has her hands full with leadership roles in terrorist groups and photo-ops with bigots, it seems that she also has time for activities with government and civic organizations.

In April 2015, Salam was appointed to the Human Relations Committee (HRC) of the Broward County School Board to serve as an advisory member of the board. According to the HRC Bi-Laws, “The committee shall support the work of the district as it pertains to our policies related to diversity, educational/vocational equity, nondiscrimination, inclusion and character education.” The individual who appointed her was elected School Board Member Nora Rupert.

In September 2013, Salam was reappointed to the Broward Commission on the Status of Women (CSW). Today, she serves as Chairwoman of CSW. According to CSW, the group is “dedicated to advancing gender equality, empowering women…, recognizing women’s accomplishments and initiating collaboration…” In 2013, she was appointed by Commissioner Lois Wexler. In 2011, the appointment was done by then-Commissioner Barbara Sharief.

In August 2015, Salam was named the Action Chair of the League of Women Voters (LWV) of Broward County. According to the LWV website, the group is “nonpartisan” and “encourages informed and active participation of citizens in government, works to increase understanding of major public policy issues, and influences public policy through education and advocacy.” LWV describes Salam as “a life-long advocate of human rights and women’s issues.”

Question: How does one advocate for human rights and women’s issues, when that same individual – Ghazala Salam – is involved with terrorist organizations and purveyors of bigotry? The answer is she cannot.

Placing Salam in a position to influence children’s education and women’s rights issues is a dangerous charade that enables her and the malicious groups she represents to gain a foothold on the community. Her involvement with CAIR, Islamic Relief and Darul Uloom renders her unfit for any job which is supposed to promote democracy and Western values, such as tolerance and equality. Her Islamist worldview and association with hate and violence is antithetical to advancement of civil society and its institutions.

Concerned citizens must make their voices heard and show that they object to the hatred and incitement which Ghazala Salam’s leadership in CAIR and activity with Islamic Relief and Darul Uloom epitomize.

She must be removed from her place on the School Board and Broward Commission immediately and be dismissed by the League of Women Voters. Terrorism should never be rewarded or tolerated.

Please be respectful in any and all communications with these individuals and groups.