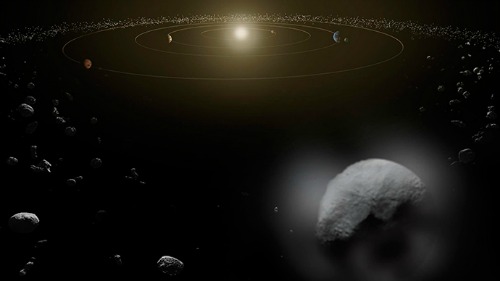 Another day, another very important bill being passed by the Senate. This one almost makes sense, but then it doesn’t… considering no nation on Earth can claim sovereign ownership of a celestial body in space, that is.

On Tuesday, the Senate passed the Space Act of 2015 which is being hailed as a way to encourage the private space industry. Part of the bill legalized space mining, allowing companies the property rights to any resources that they might extract from asteroids out there. The Daily Caller noted that a bunch of think tanks concluded the lack of this bill was a major hurdle to space-based industry development. “This bill will keep America at the forefront of aerospace technology, create jobs, reduce red tape, promote safety, and inspire the next generation of explorers,” Chairman of the House Science, Space, and Technology Committee, Congressman Lamar Smith, said in a press release.

Here’s the thing though… the U.S. can’t legally “own property” in outer space, so therefore, the U.S. can’t really grant property rights to anyone for anything out there. Just because a bill gets passed does not mean space mining is officially recognized as legal worldwide by all countries, nor does America have any “finders keepers” recognized right to say it has property rights to the stuff Americans find in space. The only real property rights America has in space at this time are the ones America can back up with the barrel of a space weapon.

“It would be like you asking me for a piece of pie, and me saying, go over to my neighbor’s house and take a piece of their pie, and then come back and thank me for it,” Michael Listner, lawyer and founder of the consulting firm Space Law and Policy Solutions told Popular Science.

On top of that, one of the amendments to the bill specifically added the word “abiotic” to the phrase “space resource” in this section:

So in other words, space miners are not allowed to keep or sell aliens from outer space as slaves. The bill expressly prohibits it. Well, at least that’s a plus…

Then again, the bill doesn’t specifically mention anything about aliens not enslaving us, so…