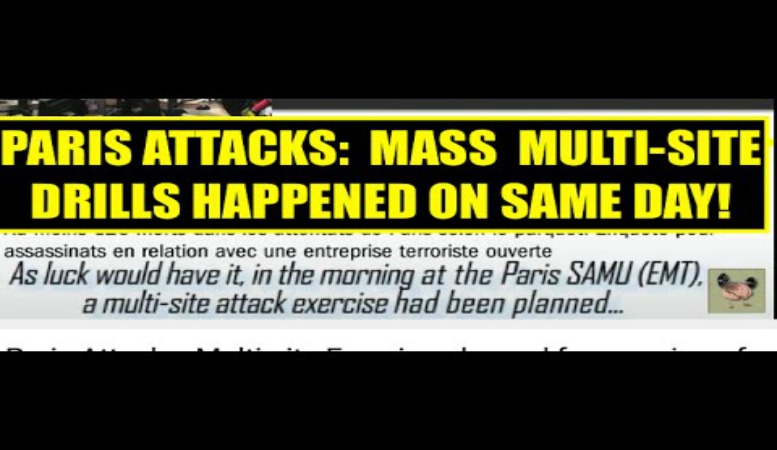 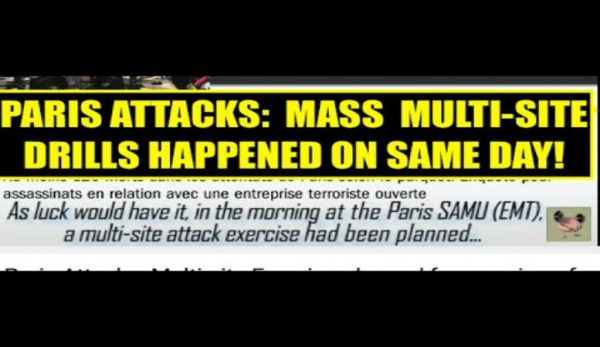 Days after the Paris massacre more evidence is beginning to emerge suggesting that the attacks may indeed have been an operation designed by Western intelligence agencies for the purpose for ginning up support for more Western intervention in Syria.

One such example is an interview given by Patrick Pelloux, an emergency medical services specialist and one of the first responders in the Paris attacks. Pelloux spoke to the radio station France Info and has apparently confirmed that an emergency drill was ongoing during the morning of the same day as the attacks. The source for the interview is contained in a video with the French language broadcast with English subtitles. The translation has Pelloux stating that, “as luck would have it, in the morning at the Paris SMAU (EMT), a multi-site attack exercise had been planned so we were prepared. What needs to be known is there was a mobilization of police forces, firemen, EMTs, associations who came [to participate] and we tried to save as many people as possible.”

Reports have also come out revealing that the UK conducted counter-terrorism drills earlier this year that included scenarios that involved terror attacks in Paris similar to those that took place on the Charlie Hebdo massacre. As the reports surrounding the UK drills were released, a number of spokesman confirmed “it had been agreed that future exercises, which take place on a regular basis, should seek to learn from events in France.” David Cameron himself stated that there was a need for police “to call on military help if there was a major emergency.”

Pelloux’s comments come in tandem with a report from SOFREP that the French National Police had met with the BND Federal Intelligence service (Germany) and the BKA Federal police (Germany) to “discuss an eminent pre-planned terrorist attack in Paris.”

Over a week ago, German police stopped a heavily armed suspect with “an arsenal of weapons” in his car and GPS coordinates for Paris. Neither French nor German Intelligence acted upon the discovery.

Lastly, at least one of the attackers was a Frenchman who was on a terrorist watch-list for five years, yet, despite the increased surveillance powers given to the government, he was not stopped from committing his act of terror.

The reality is that France knew the “Charlie Hebdo” attackers, they knew beforehand those involved in the most recent Paris attack, and they likely know of more waiting for their own opportunity to strike. With this knowledge, they stood by and did nothing. What’s more, it appears that instead of keeping France safe, the French government has chosen to use this knowledge as a weapon in and of itself against the perception of its own people, to advance its geopolitical agenda abroad. If the people of France want to strike hard at those responsible for repeated terrorist attacks within their borders, they can start with those who knew of the attacks and did nothing to stop them, who are also, coincidentally, the same people who helped give rise to ISIS and help perpetuate it to this very day.

Brandon Turbeville – article archive here – is an author out of Florence, South Carolina. He has a Bachelor’s Degree from Francis Marion University and is the author of six books, Codex Alimentarius — The End of Health Freedom, 7 Real Conspiracies, Five Sense Solutions andDispatches From a Dissident, volume 1 and volume 2, The Road to Damascus: The Anglo-American Assault on Syria, and The Difference it Makes: 36 Reasons Why Hillary Clinton Should Never Be President. Turbeville has published over 500 articles dealing on a wide variety of subjects including health, economics, government corruption, and civil liberties. Brandon Turbeville’s podcast Truth on The Tracks can be found every Monday night 9 pm EST atUCYTV. He is available for radio and TV interviews. Please contact activistpost (at) gmail.com.