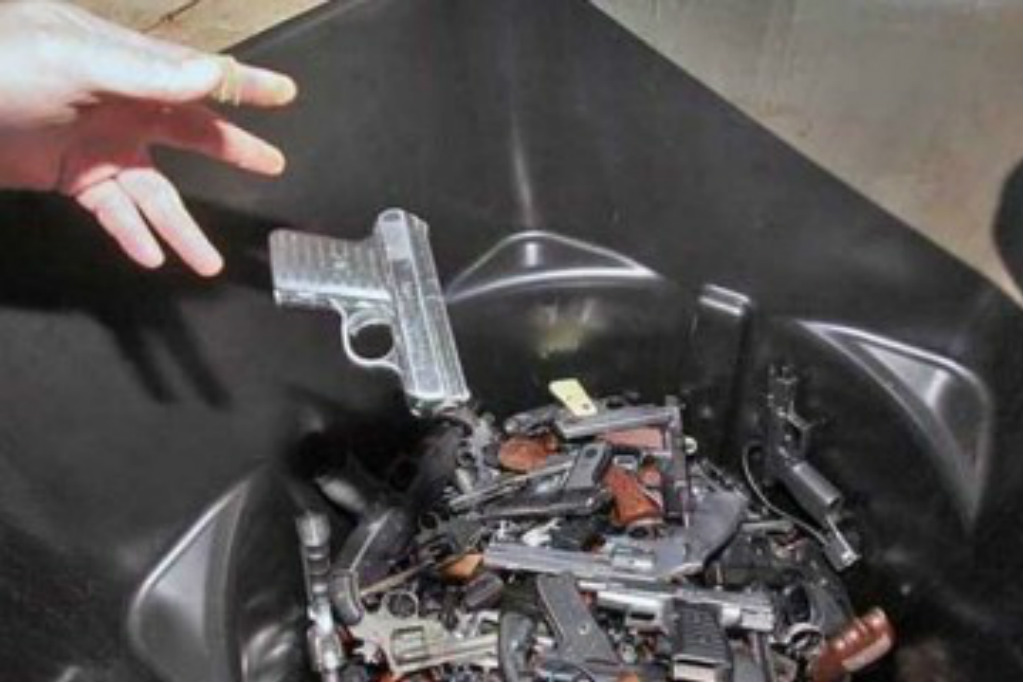 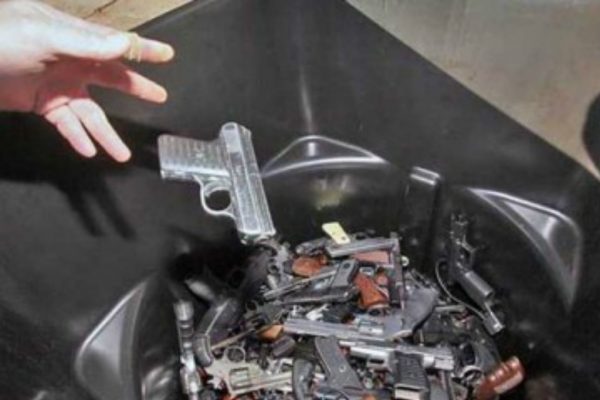 The attack in Paris, France perpetrated by Islamic terrorists has captured the attention of everyone worldwide. It’s a sign of things to come under the “forced” illegal alien invasion of Muslims by the governments of every nation, including the united States, under the direction of the United Nations by declaring these individuals “refugees.” While the attention is focused on Paris, an interesting event occurred Saturday, November 14, in Greensboro, North Carolina.

Last year, the town of Greensboro experienced a 68 percent rise in “gun violence,” according to the Greensboro News and Record. In response, the town held an event where residents could sign a “Pledge of Nonviolence” and turn in “unwanted handguns, rifles, shotguns and ammunition.” No compensation was offered to anyone who turned over their firearms to the Greensboro Police Department; however, the first one thousand people to “turn over” their arms to police received a small gift.

Speaking in an interview with WXII-TV, Deputy Police Chief James Hinson stated, “Violence is on the rise somewhat in our community. A lot of that violence is centered around handguns and aggravated assaults. And the ultimate goal is to reduce violence in our community so that our citizens can feel safe when they go out and just continue to improve the overall image of our city.”

Even if citizens did not have “firearms” to turn-in, residents were still encouraged to sign the “Pledge of Nonviolence.” In order for police to “receive” firearms, the weapons had to be cleaned, unloaded and those individuals turning in the firearm had to be at least 18 years of age. Lost or stolen firearms would be returned to their rightful owner, according to the police, and the gun turn in would be a no questions asked event.

If you viewed the news footage, police had plenty of “sheeple” that blindly followed their “requests” to “turn in your guns.” No law had to be passed. All that had to be said was, “gun violence is on the rise somewhat and we want a nonviolent community so we ask all residents to voluntarily turn in your guns to reduce violence.”

How many criminals do you think are going to turn in their guns or sign some nonviolent pledge even when the turn in is anonymous? Zero! None. The criminals are dancing around as now, they have more targets. Citizens are going to feel so safe since the guns of law-abiding citizens were turned over to police and people signed pledges to be nonviolent. Whoever believes that should check out the advertisements for “work at home” and make tens of thousands of dollars each week. Is there anyone who still believes law-abiding citizens giving up their right to bear arms will reduce violence? If so, “here’s your sign.”

What is Deputy Chief Hanson using to declare that “violent crime is on the rise somewhat” in the city of Greensboro, with the News and Record reporting a 68 percent increase in “gun violence” in the city? In checking The FBI Uniform Crime Reports for years 2013 and 2014 for the city of Greensboro, North Carolina, as reported to the FBI by the city law enforcement agency, the numbers tell quite a different story. In 2013, Greensboro boasted a population of 279,343 residents. Violent crime reported by police was 1,449 and aggravated assault stood at 856 incidents. For year 2014, the population of Greensboro was reported as 282,203, with violent crime reported at 1,346 and aggravated assault as 784. No reports are in for 2015 as yet. However, based on the numbers reported by the city’s own agency to the FBI, violent crime and aggravated assault for the town appear to be decreasing. In fact, crime in general in Greensboro is on the decline except for motor vehicle theft. Nationwide trends also indicate crime is down. Even the North Carolina Department of Justice indicates that for 2012, statewide crime is in decline. And, the same agency reported continued decrease for the year 2013.

The FBI website crime statistics for 2013 declared “Firearms were used in 69 percent of the nation’s murders, 40 percent of robberies, and 21.6 percent of aggravated assaults (weapons data is not collected on rape incidents). Is this nationwide statistic the same for the town of Greensboro? Is that statistic of firearms used nationwide being relayed to the residents of the city as a screen to “justify” a “gun turn-in” program wanted by the town’s officials? It’s rather odd the national statistic of firearms used in murders hovers at 69 percent and the quote by the Greensboro News and Record calling gun violence, in Greensboro, up by 68 percent in that city for the last year.

If “gun violence” rose by 68 percent in the span of one year as the Greensboro News and Record reported, someone might classify that as more than “up somewhat.” And, if this statistic is for 2015, why is the actual data from law enforcement provided to the FBI not included in any reporting?

What is very odd about this entire scenario is the police chief never giving any definite numbers to the news media, TV or print. Deputy Chief Hanson merely stated violent crime was on the rise “somewhat” centering around handguns and aggravated assault. No further explanation was given and reporters relaying the information to the public appeared to ask no further questions or provide any information to validate the deputy chief’s claims. There was no mention of any city council meeting where current statistics were provided to prove the claims of gun violence being up by 68 percent nor any minutes to show the council’s response. Where is the mainstream media journalism? It appears to be replaced by “pandering to officials.”

According to the January 15, 2013, city council meeting minutes, a gun turn-in day initiation resulted because of the “tragedy at Sandy Hook Elementary.” Asst. Police Chief Anita Holder indicated the city was able to collect pistols, revolvers, shotguns, rifles, bb guns and ammunition. These minutes did not indicate any increase in violent crime. June 2013 minutes indicated a second Gun Safety Surrender was held over a two-day period. (pg. 36 of minutes) No other mention of a “gun turn in” or “gun safety surrender” occurred until November of this year and no mention regarding the reason as increased crime was recorded into the minutes.

The only other previous mention of a gun turn-in, besides the November 2015 minutes, was in the August 2007 minutes where resident Leon Nutes “offered his thoughts and suggestions: i.e. guns for meals exchange at Thanksgiving ….” (pg. 3 of minutes)

Granted, there were hours upon hours of city council videos; however, written addendums and information containing factual statistics on crime appears in city council written minutes for council members and the public to read, in addition to the oral presentation by the official, if it occurs. None of the minutes pertaining to this issue contained any statistics regarding crime reports to validate claims made by the Deputy Chief of Police, in the TV report.

In the city ordinances, it was discovered under Section 18-25 Deadly Weapons prohibited, the city considers it “unlawful for a person to possess, on or about his person, either concealed or otherwise, any deadly weapon as defined above ( meaning gun, rifle pistol or other firearm of any kind) while on the premise of any city-owned or operated building….” Nothing prohibits an individual from ownership, but individuals are limited in their exercise, which infringes on the rights of the residents.

The City of Greensboro, for whatever reason, but noted in the council minutes as attributed to Sandy Hook, initiated a “gun turn-in” program, without compensation to any resident. However, as indicated in their own city council meetings, the “gun turn in” idea goes back to 2007, long before Sandy Hook, meaning the city was looking for reasons to engage in “gun grabbing.” It appears they are being successful since TV news coverage filmed plenty of rifles, shotguns and handgun on tables with police tagging and bagging the weapons. Greensboro residents appear all too eager to “voluntarily” hand over their firearms based on a city’s “request” especially when offered an incentive of a “small gift.”

Greensboro residents have bought into the lie that “security and safety” is only maintained when the people are unarmed. The city council, through ordinances, infringes on the Second Amendment rights of the people to bear arms. And the people comply. Those who turned in their weapons deserve neither safety and security or freedom. Remember, criminals will always have weapons as they do not follow the laws. When seconds count, the police are minutes away. And if those residents of Greensboro believe crime is on the increase or “up somewhat,” why in the world would anyone turn in their means of self-defense for a “small gift?” “Here’s your sign!”

Editor’s Update: Breitbart.com is reporting that this event may have fallen flat. It is being reported that one knife and one BB gun were the only verifiable results from the city’s collection efforts. It is also being reported that nearly 1000 signed the pledge and it must be noted that an official count of weapons turned in has not been released. The Breitbart story is based on a video that only showed two “weapons” that were surrendered, but that does not mean there were not more.