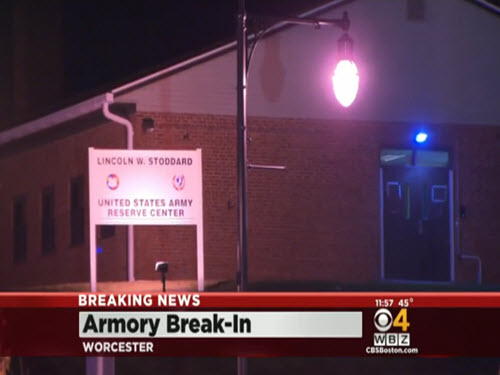 This story sounds like potential false flag set up, and it’s being intentionally censored and edited by authorities and the mainstream media.

The current report is very short. Weapons, the identity and quantity of which everyone is now being told has not been released by the FBI, have been stolen from the Lake St. Army Reserve Center in Worcester, Massachusetts.

The break-in occurred sometime late Saturday evening. The FBI is currently searching for the weapons, which have been entered into the NCIC database — so obviously it is very clear what weapons and how many were stolen. Authorities on multiple levels were quick to note (over and over and over) that the missing weapons have no link to any specific terrorism threat.

And that’s all. The same short report was featured on Washington Times, but the entire story was later taken down. (Here is a link to the archived report.)

Bearing Arms.com reports that the media is attempting to rewrite the story by walking it back to claim specifics on the stolen weapons are “unclear”.

Why? Because the specifics of the stolen weapons were reported in the beginning. 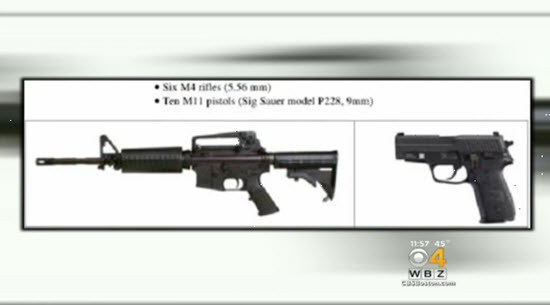 Initially, the Boston Herald reported it was a cache of “high-powered weapons” that was taken, linking to a local CBS affiliate’s live on scene report specifically mentioning 10 M11 pistols and six M4 semi-automatic rifles:

By the way, none of these reports discuss how it was so easy for thieves to break into a U.S. military armory and steal this many weapons. A surreal moment is seen in the newscast above when retired Army General Kevin Ryan is interviewed and says, “Any time that you have terrorist groups or just criminals breaking into police stations or armories stealing weapons in order to threaten the local government, the people, that’s something we all take seriously.”

Really? That’s something we all take seriously?

Gee. I kinda hope so.

However, as Bearing Arms notes, it was originally stated that a number of “long guns” were taken as well:

This intentionally murky invocation of “long guns” suggests heavier weaponry, either in the form of sniper rifles or perhaps even heavier weapons. What kind of weapons?

An Indiana reservist commenting on the break-in gives us an idea of the kind of weaponry you’d expect to find in an Army Reserve armory:

This is really bad! The amount of trouble it took to get in and steal weapons must have been worth it to someone. My reserve center in Indiana had a huge armored gun room with 2foot steel walls and tempered steel locks and tumblers. We had M-9s, M-16s, M203s, M-60s, M-249s and some old M-79s and probably some things that I never saw. Most Americans can buy long guns and handguns legally even in Massachusetts. If they want M-16/M-4, etc. It would have been easier to buy them as semi-autos through an out of state stray man purchase. So who would want full-auto military weapons and would not worry about selling them or transporting them and would not care about the police/law enforcement scrutiny? The only answer I can think of would be drug cartels and Terrorists. Drug cartels would need to travel all the way to Massachusetts or to transport the guns back to Mexico or central America. So the only people that I can think of who would need military grade, full-auto firearms within the Commonwealth of Massachusetts are a terrorist cell. We will find these guns very soon. I just hope it is not after a mall attack or stadium attack.

The Massachusetts media is walking back the original story of missing M4s and “long guns” to insist that the armory robbery only yielded handguns and “semi-automatic rifles,” which the Army does have, but in relatively limited amounts.

Keep in mind this happened just a day after the Paris attack, and just before ISIS released a new video claiming Washington D.C. is next. The stage is being set.

And as this story continues to get downplayed and edited (or deleted), authorities just keep saying over and over that these weapons are not linked to any specific terrorism threat.

It cannot go unnoticed that this is the same type of hazy report seen coming out of France back in July when a French Army depot was raided and explosives were stolen, including 40 grenades, 200 detonators, and some plastic explosives. Amazingly, it was reported that the base had had no security and no CCTV at the time of the theft.