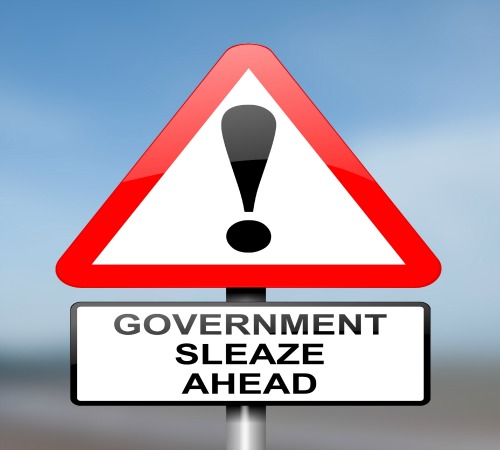 Another day, another scandal…

Whistleblowing organization WikiLeaks has published classified transcripts and audio files that appear to reveal massive fraud with ties to the Bush and Obama administrations.

In a Tweet on Monday, WikiLeaks said it has 30 hours of audio recordings related to a billion-dollar corruption scandal “with links to the White House.”

The recordings appear to provide evidence of fraud within the administrations of George W. Bush and Barack Obama, with appointees to both presidents allegedly misappropriating funds in a government program called AbilityOne.

Taxpayer money set aside for AbilityOne, which is mostly distributed by the non-profit SourceAmerica, is intended for companies in which at least 75 percent of work is performed by disabled people. AbilityOne awards roughly $3 billion annually in government contracts. The program is meant to supply jobs to those who are blind or have other significant disabilities and to veterans, including wounded warriors.

AbilityOne is the largest employment program for disabled people in the U.S., funneling $2.3 billion a year through SourceAmerica to more than 1,000 designated partner organizations.

Allegations of fraud and corruption against AbilityOne and SourceAmerica cropped up in July, when critics accused the program of giving contracts to companies that did not have enough employees with disabilities to reach the threshold that would qualify them to receive federal money.

The WikiLeaks tapes allegedly reveal that more than half of the $2.3 billion went to defense contractors and other major corporations that did not employ enough disabled people to qualify for the federal money, including the Department of Defense and contractors like Lockheed Martin, Northrup Grumman and Boeing.

“It is alleged that nearly half of the $2.3 billion a year does not go to the severely disabled, but is rorted by pushing the money to corruptly favored placement organizations that recruit the able bodied or the mildly disabled instead of the mandated 75% severely disabled,” WikiLeaks said. “The result is billions in tax payer funded labour subsidies and increased profits for the placement organizations.”

Ten officials appointed by Obama and three appointed by Bush were allegedly involved in the misappropriations.

Earlier this year, SourceAmerica released a statement denying the claims:

SourceAmerica conducts its business with the utmost integrity and complies with all federal and state requirements, including those related to the administration of the AbilityOne Program. The allegations being made against SourceAmerica are simply without merit.

SourceAmerica is defending itself against these unfounded allegations, many of which are related to ongoing litigation brought forth by a very small number of individuals, and we anticipate a favorable resolution of these lawsuits.

But RT provides us with this reminder:

WikiLeaks has been at the forefront of publishing information detailing various government abuses and overreach, including the documents about the US military conduct in Iraq and Afghanistan, portions of the secret Trans-Pacific Partnership pact, and documents the CIA director kept on his personal email account.

I’m inclined to believe the WikiLeaks account of the story, because I can’t think of a time when they have gotten something wrong.