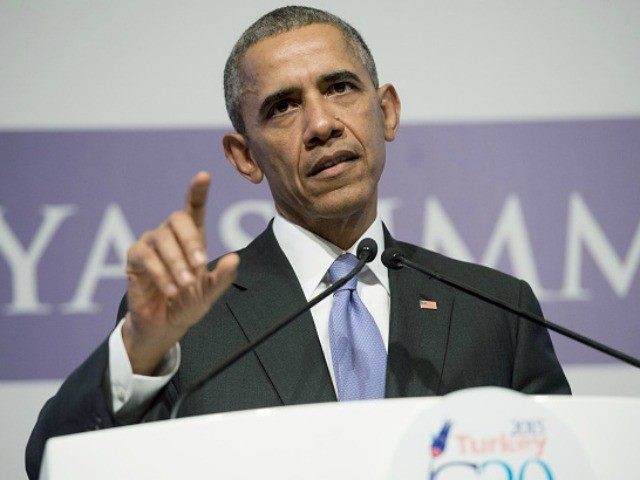 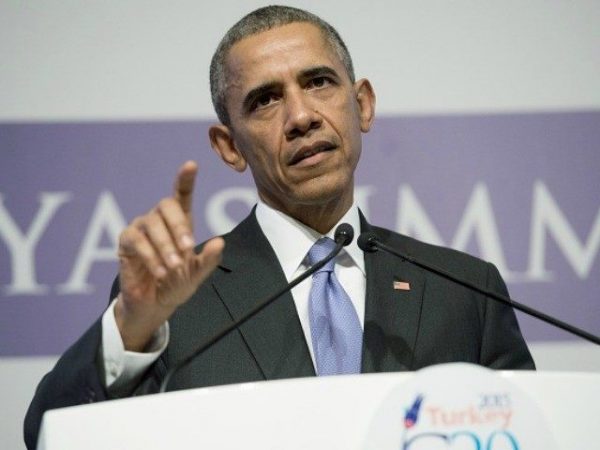 It was unprecedented in American history: the U.S. President took to the world stage to viciously attack Americans, not once, but twice in as many days.

In the wake of the Paris jihad massacre, French President Hollande declared, “It’s an act of war.” President Obama, on the other hand, declared war on the American People.

Like Bertolt Brecht, that spineless, gutless running dog for East German tyranny, Obama believes that if the people vote the wrong way, “Change the people.” Of all the imperious actions Obama has taken over these long seven years of his anti-American presidency, the most egregious is his fundamental premise, that it is not he that serves the people, but the people serve him.

A few days ago, I addressed Obama’s ugly tirade against us at the G20 summit in Istanbul here at Breitbart, noting that in his speech at the G20 Summit in Turkey on Monday, Obama took a harsher tone with Republicans than he has with ISIS. In the wake of the Paris jihad slaughter, he is obsessed with importing more Muslims, not defeating the Islamic State. And he calls anyone opposed to increased Muslim migration — namely the GOP — “shameful.” But it is Obama who is shameful. He’s the one who has applied a religious test to migrants. He has refused Christians seeking refuge from jihad genocide. He has refused to meet with Middle Eastern Christian leaders. They are the true victims of the jihadi wars.

He chose to follow this grave betrayal and further deterioration of American hegemony with an even more vicious attack on Americans in his remarks yesterday in the Philippines. It is not lost on me that he would make these remarks in country that is besieged by jihad terror. For years now, the majority Catholic nation has been under siege by Muslims waging jihad. Obama said:

And so if there are concrete, actual suggestions to enhance this extraordinary screening process that’s already in place, we’re welcome — we’re open to hearing actual ideas. But that’s not really what’s been going on in this debate.  When candidates say, we wouldn’t admit three-year-old orphans — that’s political posturing.  When individuals say that we should have a religious test and that only Christians — proven Christians — should be admitted — that’s offensive and contrary to American values.

Yes, Christians should have been permitted to enter, to allow them to escape genocide by Muslim supremacists. Hundreds of thousands of Christians and religious minorities have been slaughtered, crucified, beheaded, in the cause of jihad. Obama did nothing. That is contrary to American values. Standing up for victims of genocide is not “contrary to American values.” He applied the religious test and prohibited Christians from escaping terror. Thousands of Syrian Muslims have been admitted into the U.S., while only 52 Syrian Christians have been so fortunate.

Mocking and denigrating Americans on the word stage is “contrary to American values.” Only a monster would taunt us for our genuine national security concerns. ISIS has vowed to attack us and issued new videos warning of coming attacks on New York City and Times Square. Obama’s “junior varsity” team is roiling the world, and we are supposed to trust him to vet them? Vet them how? His administration scrubbed counter terror materials of all mention of Islam or jihad in connection with terrorism. So how will they vet them?

I cannot think of a more potent recruitment tool for ISIL than some of the rhetoric that’s been coming out of here during the course of this debate. ISIL seeks to exploit the idea that there is a war between Islam and the West. And when you start seeing individuals in positions of responsibility, suggesting that Christians are more worthy of protection than Muslims are in a war-torn land, that feeds the ISIL narrative. It’s counterproductive, and it needs to stop.

ISIS is not exploiting the idea “that there is a war between Islam and the West.” They are waging war against the West. It is very real, and the body count is climbing. He said opposing his plan to import Syrian refugees to America will serve as a “potent recruitment tool for ISIS.” In other words, he is recommending that we surrender to the violence and intimidation of growing Islamic State. Bow and scrape and hope that submission soothes the savage beast. Opposing jihad terror is not a “potent recruitment tool for ISIS,” Mr. President. Islamic texts and teachings are the only real “recruitment tool” for Islamic supremacists.

And I would add, by the way, these are the same folks oftentimes who suggest that they’re so tough that just talking to Putin or staring down ISIL, or using some additional rhetoric somehow is going to solve the problems out there. But apparently, they’re scared of widows and orphans coming into the United States of America as part of our tradition of compassion. First, they were worried about the press being too tough on them during debates. Now they’re worried about three-year-old orphans. That doesn’t sound very tough to me.

Widows and children. Like the female suicide bomber who blew herself up in the Paris raid on Wednesday, or refugee children like the Boston bombers? And really, which with widows and orphans is he talking about? Four out of five of the Syrian refugees descending upon Europe are not Syrian. 85% of them are young male military age.

He went on to say:

They’ve been playing on fear in order to try to score political points or to advance their campaigns.  And it’s irresponsible.

Opposition to something does not mean a fear of it. We disapprove, that does not necessarily suggest cowardice. Opposition to jihad is correct and rational. It’s moral indignation against an enormous evil.

And it’s contrary to who we are. And it needs to stop, because the world is watching.

Yes, the world is watching YOU, Mr President — in shock and terror. In the wake of unimaginable slaughter, President Obama stumps for Islam and viciously attacks the target of the enemy: us. We are not “playing on fear”; there is a war going on, and they are killing people. We are not playing, but you are, Mr. President — with our very lives.

I was proud, when the attacks in Boston took place, and we did not resort to fear and to panic. Boston Strong. People went to the ballgame that same week, and sang the National Anthem, and went back to the stores and went back to the streets. That’s how you defeat ISIL. Not by trying to divide the country, or suggest somehow that our tradition of compassion should stop now.

There he goes again. He is proud of hashtags and teddy bears — sophomoric, embarrassing, preening self-indulgence. How was Boston strong? After the Boston Marathon jihad bombings, the media and Boston elites refused to call the attack jihad. The Boston city government refused repeatedly to run our American Freedom Defense Initiative (AFDI) counter-jihad ads, but run vicious Jew-hatred ads regularly. We are en route to the Supreme Court to compel Boston to run our ads. What’s strong about Boston? What stand did Boston take against jihad? No stand at all. Is that what Obama is proud of? In a word, yes.

Obama demands uniformity of opinion. So did Stalin, Hitler, and the like. He has, for years, taken gradual steps toward authoritarianism. He has been getting away with small encroachments. If Obama continues down this totalitarian path, the people will have to take back our government.

We know ISIS threatened that in February to flood Europe with 500,000 refugees. And they’re doing it: there have already been jihadis discovered among the refugees, and a third refugee was tied to the Paris attacks. Cell phones left behind by “refugees” show links to terrorists. The Lebanese Education Minister said there were 20,000 active jihadists among the refugees in his country alone. This is not theory. This is real. This is objective reality.

Obama’s first and foremost responsibility is the safety and security of the American people. We know he could pause this program. Back in 2011, the Obama administration stopped processing Iraq refugee requests because terrorists were coming into the country. Obama has refused to explain how his administration’s security-related pause on processing Iraq refugee requests in 2011 did not ‘betray our deepest values.’”

Eight ISIS terrorists were apprehended at a Turkish airport yesterday, posing as “refugees.” This is reason enough not to allow Syrian refugees into this country. They have issued kill lists of U.S. citizens, soldiers, FBI and CIA personnel, and me. Why import our killers?

Obama created this imminent threat by denying the existence of jihad. He created the threat by leaving Iraq precipitously and giving an enormous opportunity to this group. He still denies that the Islamic State is Islamic. He is encased in denial and is willfully deceiving the American people.

We are morally justified in our opposition. Obama, on the other hand, is playing the demagogue, using “women and orphans” as human shields for a refugee plan that will lead to catastrophe. Obama, as much as the jihadis, presents an imminent danger to this our nation, our freedom, and our very lives.