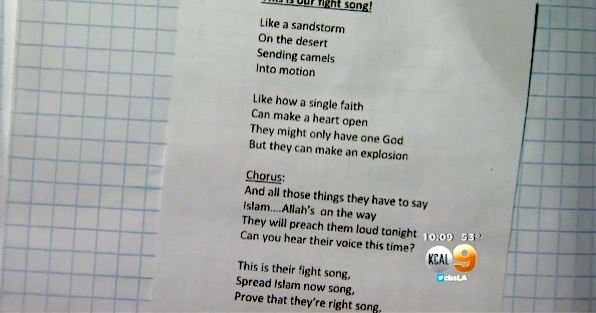 More outrage has been heard from parents after a California teacher had her students sing an Islamic “fight song.”

The teacher, who was not identified (and why, we don’t know), wrote a song about Islam to the tune of “Fight Song.” She claims it was a “catchy way” to teach about Islam.

Here are the lyrics:

Like a sandstorm on the desert, sending camels into motion.
Like how a single faith can make a heart open, they might only have one God,
But they can make an explosion.

All those things they have to say, Islam … Allah’s on the way.
They will preach them loud tonight. Can you hear their voice this time?
This is their fight song. Spread Islam now song. Prove that they’re right song.

A seventh-grade boy’s mother and grandmother found out about the song when the boy came home with the lyrics. Nichole Negron and Susan Negron then went and confronted the Oceanview School Board on Tuesday evening regarding the song, especially since it was coming on the heels of the Islamic jihad attacks in Paris, France.

“I believe that by singing this song, the children feel comfortable believing that maybe Allah is the only god, and maybe that they should start following him,” Susan argued. “And that I’m not OK with.”

That’s exactly right, but instead of just being upset about it, why not remove the boy from the school and teach him at home? Why not do as our forefathers did long ago and take the duty and responsibility of teaching our children ourselves? Why trust them to a statist run school that we know is anti-Christian, is lawless (having usurped education from parents), and is corrupt, even pushing the false god of Islam on American young people? Why do that? Because it’s easy.

The interesting thing is that the two women were not the only ones upset. An unlikely upset voice was heard, but his reasons were completely different.

Ojaala Ahmed with the designated terror group Council for American Islamic Relations (CAIR) in Anaheim also spoke out about the song, but didn’t like it because he believed it might put Islam in a bad light.

He related it to the recent attacks in Paris, but added a special twist about it creating a backlash against Islam, “Especially with the recent attacks ISIS has been doing, knowing that this potentially Islamaphobic backlash might come about, what was the teacher’s intention.”

One would think that Ahmed would be happy about this. After all, CAIR has been pushing for special requests for Muslim holidays, sports uniforms, times of prayer in public schools and on the other hand attacking off campus Bible studies that were promoted in school. The organization has openly supported Islam in textbooks, so what it the problem for Ahmed? He thinks people will link Islam with jihad attacks.

Well, surprise Ahmed! We do. That’s exactly what we do because the Quran teaches it, Muhammad engaged in it and the history of Islam, including our own country’s history, has been filled with dealing with Islamic terrorists. Contrary to popular opinion, there are many Muslims who are murdered at the hands of other Muslims, so there is no Islamophobia, but rather a real understanding that those who wish to follow the Quran to the letter must engage in such activities against the infidel and hypocrite Muslims.

Of course, in all of this, the school district apologized and said they would investigate, but we all know they will simply sweep this under the rug.

Parents, if you are concerned about your children and what they are taught in public indoctrination centers, understand that God gave them to you to teach and train, not the state. You can do it! I know you can, and as always, I let you know that you can begin for free by clicking here.